When you finally decide to retire, you know you are giving up a regular paycheck. But you'll also be giving up the opportunity for regular pay increases, too. Which is why it's important to focus on both dividend-paying stocks and companies that have a history of annual dividend increases, like Emerson Electric (NYSE:EMR), Helmerich & Payne (NYSE:HP), and Consolidated Edison (NYSE:ED).

Emerson Electric is a global industrial giant with revenue of around $14.5 billion in fiscal 2016. That, however, was down about 11% year over year. The decline is a reflection of the weak industrial end markets Emerson serves, a trend that's not expected to change in the near term. That said, despite some headwinds, the company didn't stop increasing the dividend. It announced its intention of bumping its dividend again in its fiscal first quarter when it reported fiscal year-end earnings in November.

That dividend increase, a small hike of just 1%, will push Emerson to 61 years of annual increases. Although 1% isn't much to write home about, it speaks to the company's current market (shareholders have to share some of the pain) and its dedication to returning value to shareholders via regular dividend hikes -- in good markets and bad. And to put some perspective on that 1% figure, the company's 10-year average dividend hike is closer to 8%. So when the cyclical industrial space picks up again, it's reasonable to expect Emerson to boost dividends at a higher rate.

With a yield of around 3.3%, Emerson is a solid company to look at for dividend income and -- just as important -- dividend growth over time. 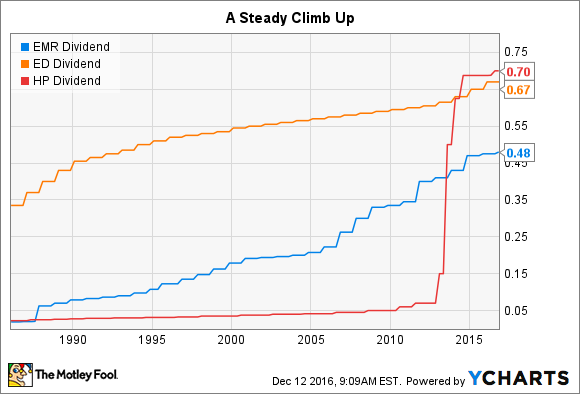 Another company with a long history of annual dividend hikes is Helmerich & Payne. The stock yields around 3.4% today, a lot less than what it offered up not too long ago when oil prices were falling from over $100 a barrel to the $30 range. That's important for Helmerich & Payne because it builds, leases, and operates drilling rigs.

With falling oil prices, drillers simply stopped drilling as much. To give you a number on that, the company's revenue was basically cut in half in fiscal 2016. Its rig utilization went from 62% to 30%. These are clearly tough times for the highly cyclical oil services industry. But that didn't stop the company from upping its dividend again.

Like Emerson, the hike was small at just under 2%, but it speaks to the company's dedication to investors. The most recent increase brings Helmerich & Payne's annual streak to an impressive 44 years, including through some of the oil services industry's most difficult times (like now).

It's hard to give a long-term picture on this company's "normal" hike because it made a material boost to the dividend about three years ago, taking it from $0.28 a share per year in 2012 to $2.44 in 2014. However, the fact that it has kept the streak going since that point despite the tough market it faces speaks volumes about the company's commitment to its shareholders.

What about the future? Although Helmerich lost money in fiscal 2016, low capital expenditures and high depreciation costs for its modern fleet of rigs allowed it to generate plenty of cash. In fact, the company's cash balance increased $176 million in the year. It paid out around $300 million in dividends. With so much extra cash around, it looks like there's plenty of upside potential for the dividend from here.

With oil markets starting to stabilize, investors looking for a mix of income and income growth would be well served taking a deep dive here.

The last company of this trio offers the highest yield at 3.75%. That said, Consolidated Edison is probably a company to keep on your watch list right now after the stock's solid 17% advance over the last year. That's a pretty big move for a utility stock. In fact, over the past few months it's been pulling back. And, to be honest, a yield in the 5% range would be a much better entry point. A quick look at the utility's elevated enterprise value to EBITDA ratio confirms that's it's still a bit pricey right now. 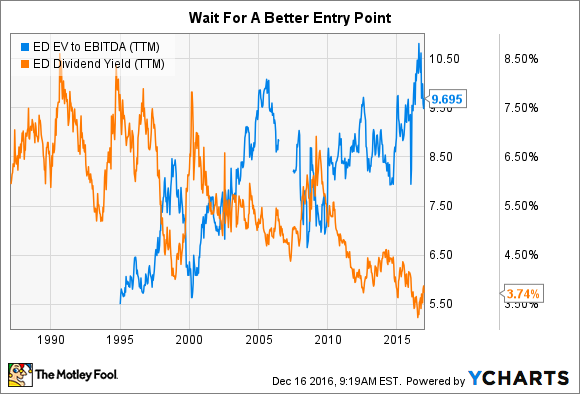 But Con Ed and its 42 years' worth of annual dividend increases is worth waiting for. That's a dedication to dividend safety and growth that some of the country's largest public utilities, like Southern Company and Duke Energy, are decades away from matching. However, don't expect huge increases, Con Ed is a utility and by regulation can only grow its top and bottom lines just so fast, which is why waiting for a higher yield is probably a good idea.

A key attribute that makes Con Ed worth keeping on your watch list is the fact that it serves New York City and its surrounding areas. It's also shifted from getting paid for electricity to being paid for delivering electricity, and simply passing on electricity costs to customers. So it's in a power-hungry market and changes in electricity supply will have a muted impact on its business, positioning it well for the shifting landscape in the utility market.

Jumping in now might not be the best idea, but take some time to get to know Con Ed. Once you do, you'll likely give it a prominent place on your watch list for a day when Mr. Market offers up a good deal. And those regular (though small) annual dividend hikes will help lay a solid foundation for your retirement portfolio.

Paying you and raising you

When you retire, you'll probably want to start living off of your investments. That means finding stocks that will help you make money in retirement by paying you to own them. But don't get too caught up in the size of the yield a stock offers, because you'll also want to make sure your stock "paycheck" grows over time. And the best way to do that is to buy companies that have proven that they prioritize a steadily increasing dividend -- in good times and bad -- like Emerson, Helmerich & Payne, and Con Ed.