Now that the dust has settled on 3M Company's (NYSE:MMM) 2017 outlook meeting, it's time to take a deeper dive into what management outlined and what it means for investors. Here's a look at five key conclusions from the presentation and how they relate to the investment case for buying the stock.

As readers already know, the forecast for 4% to 8% EPS growth falls short of the mid-term target of 8% to 11% annualized growth between 2016-2020 laid out at the investor day presentation in April.

Dividend will grow in line with earnings

The stock sports a useful 2.5% dividend yield, and as you can see below 3M has significantly increased the amount paid out to shareholders in dividends in recent years. In absolute terms, dividend per share has increased from $2.54 in 2013 to $4.44 in 2016 -- significantly more than peers like General Electric Company (NYSE:GE) or Eaton Corp (NYSE:ETN). 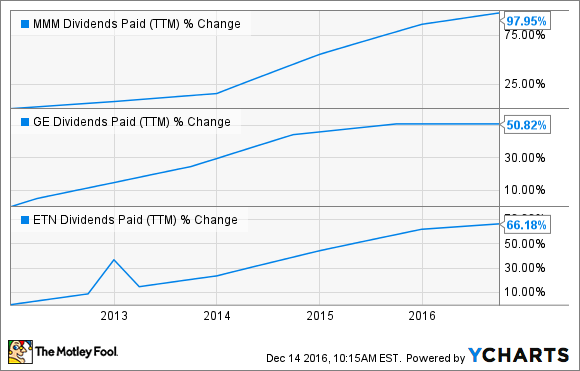 However, CFO Nick Gangestad said, "We expect our dividend to grow in line with earnings over time." In other words, assuming the current stock price of around $178, and an earnings growth rate in the high-single-digits, the dividend yield won't be much above 3% in the next three years -- something for dividend seeking investors to consider.

The industrials sector, including stalwarts like General Electric and Eaton Corp, has outperformed a rising market since Trump's triumph, but interestingly 3M Company has underperformed. 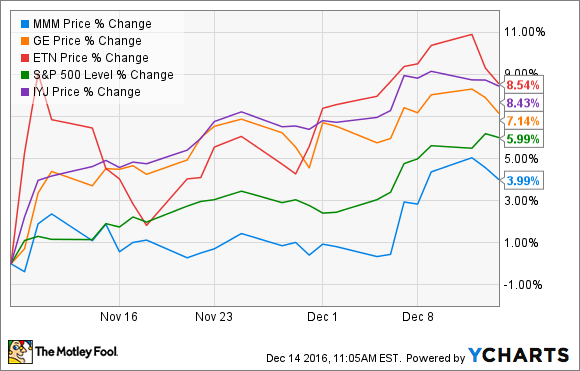 That said, there appears to be some potential upside to earnings guidance from any stimulus plan in the US. Discussing the matter, CEO Inge Thulin said "No, it's not baked in what you saw here today in terms of if anything is happening in the U.S., but we estimate it will happen" -- and then outlined that "maybe in the second part of 2017" it would start to be apparent in 3M's pipeline.

General Electric Company stock is up more than 25% since the start of January 2015 largely on the back of internal execution, and investors will be hoping 3M can spur similar growth with two key parts of its internal objectives. On this note, there are two pieces of good news.

Investors should also take note of two key aspects of growth in 2017.

According to Gangestad, "In 2017, we anticipate the second half growth to be slightly stronger than the first half, particularly in our healthcare business." In other words, don't panic if the run rate of growth in the first-half is lower than that forecast for the full-year.

Second, Gangestad stated that the majority of the estimated 1% to 3% organic growth would come from volume rather than pricing, even though pricing was expected to be positive. This raises the possibility of some upside to growth estimates if the economy improves more than expected. Companies usually find it easier to increase pricing in a stronger trading environment.

All told, 3M has some earnings upside potential, and the company is largely on track with its internal execution. The problem seems to be that weak growth in its end markets is pressuring its ability to meet its 2020 earnings and growth targets. Furthermore, given how highly the stock is rated, and the likelihood of moderate dividend growth in the near-term, it's hard to conclude that 3M is a good value for investors.