2016 was suppose to be a breakout year for ACADIA Pharmaceuticals (NASDAQ:ACAD), but it's turned out to be a bust instead. Shares of the commercial-stage biopharma focused on diseases of the central nervous system have traded erratically all year long, and they are currently on pace to end the year down more than 27%. That's a loss that exceeds the biotech industry in general as measured by the iShares Nasdaq Biotech ETF (NASDAQ:IBB). 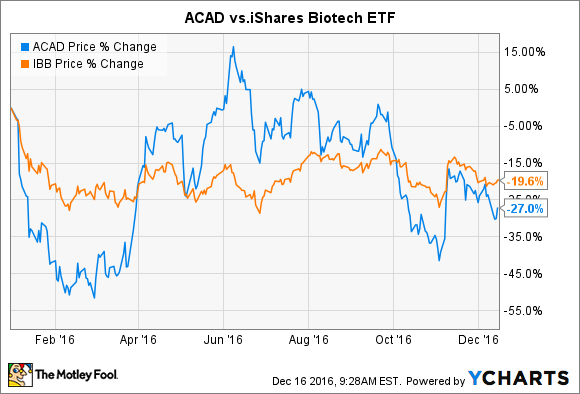 Why have shareholders had to suffer through terrible returns year to date, and is this company's future still looking bright? Let's take a closer look at the year's key developments to determine if the company's stock could be close to bottoming.

Why it's been a rough year

Acadia's investors got the big news they were looking for in April when the FDA approved the company's first drug, Nuplazid, as a treatment for Parkinson's disease psychosis. This disease affects roughly 400,000 patients in the U.S., and Nuplazid is the first and only medicine to be approved by the FDA to treat the condition.

Since Acadia's management team knew they had this indication all to themselves, they went big and priced the drug at $23,500 per year. That stoked investors' belief that the drug could eventually reach blockbuster status, so enthusiasm was running high.

With a wide-open market opportunity ahead, Acadia made the bold decision to sell Nuplazid all by itself. Thus, the company started to invest heavily in building up its commercial capabilities by hiring its own sales force.

Of course, marketing a drug is an expensive endeavor, so Acadia's expenses have been on the rise. Through the first nine months of the year, Acadia has racked up a net loss of more than $192 million. That's sharply higher than the $118 million loss that was recorded through the same time period in 2015.

Understandably, the huge jump in expenses has made some investors nervous, especially since the company's quarterly losses are consistently coming in higher than analyst's expectations.

To help cover the additional expense, Acadia decided to raise cash with a second secondary stock offering in August, following an earlier one in January. While those moves raised a total of $500 million, they also diluted shareholders by more than 16%.

Given the dilution, the higher-than-expected expenses, and the general sell-off in the biotech sector, it is no surprise to see that shares have tanked year to date.

Here's why we could be near the bottom

While choosing to go at it alone has caused Acadia's spending to soar, it's important to remember that the company retains all of the upside if Nuplazid turns out to be a hit. Thankfully, the early signs are pointing to Nuplazid being a winner.

In its first full quarter on the market, Nuplazid's sales came in at $5.3 million. That might not sound like much, but it was far ahead of the $2.6 million in total sales Wall Street was expecting. In addition, the company's huge growth is bound to continue as formulary access to Nuplazid continues to expand. Currently, Nuplazid is now covered by nearly all Medicare plans, and many commercial payers are jumping on board, too.

It's also worth remembering that management is spending like crazy because they believe Nuplazid's use extends beyond Parkinson's disease psychosis. Currently, Acadia is studying Nuplazid for five other disease states, including Alzheimer's disease, schizophrenia, and depression.

Here's a look at the company's current pipeline.

While all of these indications look promising, Alzheimer's disease psychosis looks like an especially lucrative opportunity. Right now, about 5 million Americans suffer from Alzheimer's disease, and somewhere between 25% and 50% have hallucinations and delusions. If Nuplazid can ultimately win approval for this indication, then its potential addressable market could expand substantially. Investors should have a good indication about the drug's chances quite soon, as the company is expected to announce data from its Phase 2 Alzheimer's study any day now.

All in all, Nuplazid is off to a fast start, and there are plenty of reasons to believe in the drug's long-term potential. If Acadia can successfully capitalize on its huge market opportunity -- which, I'll admit, is a big "if" -- then I could easily see 2017 turning into a banner year for shareholders.