The downturn in the mining industry took a serious toll on Teck Resources Ltd (NYSE:TECK) and Cliffs Natural Resources (NYSE:CLF). The pair are on the mend, but there are a couple of key differences between them that make one a much better option than the other for long-term investors. Here's what you need to know.

It was a bad time

There's no denying it, Teck and Cliffs have had a rough go of it. For example, Cliffs' top line fell from roughly $6.5 billion in 2011 to just $2 billion in 2015. This year doesn't look like it will be much better than last year, even though the price for the iron ore Cliffs produces has started to rebound. Teck, meanwhile, watched its top line fall nearly 30% over that same span.

Earnings at each of the companies dipped deeply into the red in the last couple of years, too. The depth of the losses each experienced was driven by one-time write offs, with Cliffs' 2014 loss of $47.29 a share an almost astounding figure. Teck's worst year was 2015, when it posted a loss of "just" $4.29 a share Canadian. You get the picture, though, it's been tough for this pair of miners.

This year, however, there's been a notable turn for the better. Iron ore prices have begun to rebound, lending support to Cliffs top- and bottom-lines. That said, revenues are still down year over year through the first three quarters. Cost cutting, meanwhile, has had a big impact and has helped the company's return to profitability. Teck has benefited from recently improving steelmaking coal, copper, and zinc prices. That said, through the first nine months of the year gross profit at each of these businesses remains weaker than the same period in 2015. Cost cutting has been a big focus for Teck, too. 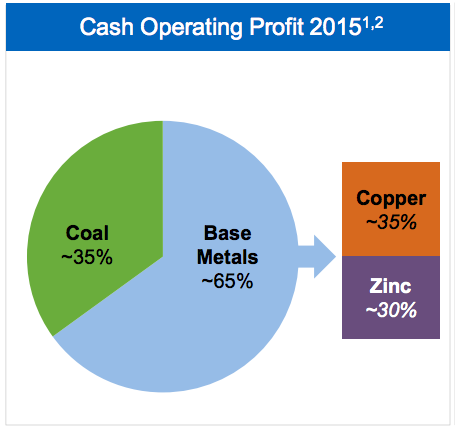 There's a little more for investors to read into those statements, though. Cliffs, which sold off its coal business during the downturn, is really a one-trick pony today. It is reliant on iron ore demand and prices. Teck produces three major commodities, a huge amount of diversification, relatively speaking. And it's on track to add a fourth major commodity -- oil -- to the mix in the next two years. With oil prices stabilizing this year, that investment is also starting to look a lot better than it did just a year or so ago.

It was the cost of the oil project known as Fort Hills that had many industry watchers worried about Teck's balance sheet when commodity prices were weak. The project was started when oil was trading hands at over $100 a barrel and began to look like a questionable use of cash when prices quickly fell below $30. But as commodity prices have started to move higher, Teck's balance sheet seems in solid shape with long-term debt amounting to about a third of the capital structure and roughly $1.1 billion of cash on hand at the end of the third quarter.

Cliffs' shareholder equity is negative because of the massive write offs it took. That's left long-term debt at over 100% of the capital structure. And it had just $130 million or so of cash at the end of the third quarter. To be fair, it's working hard to trim its debt load, but its balance sheet is simply in much weaker shape than Teck's. 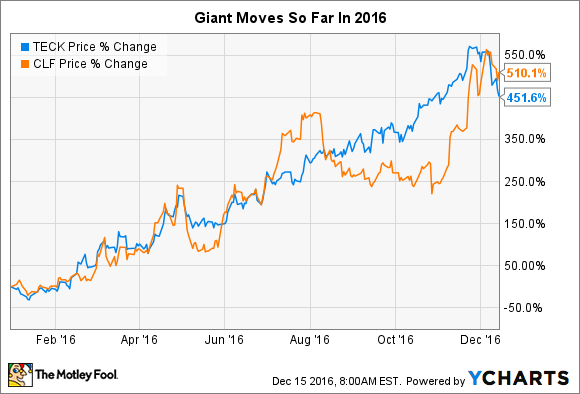 Both companies look like they are seeing a turn for the better, which is good. It's also why both stocks are up sharply this year. But Teck's more diversified business, expansion plans, and financial strength mean it's starting this turnaround from a much stronger position and likely has a brighter long-term future.

When you look at Teck and Cliffs, you are really considering two companies working back from a difficult mining industry downturn. Each has made big moves to deal with the downturn and, from the look of things, is on the mend today. However, Teck is a more diversified company, is soon to add a fourth commodity to its mix, and is on stronger financial footing. If you are comparing Cliffs and Teck, Teck appears to be the better long-term option for investors.