Costco Wholesale (NASDAQ:COST) has become one of the biggest retailers in the U.S through a combination of rock-bottom prices, a membership model that gives customers an added incentive to shop, and the so-called "treasure hunt" experience by which shoppers get free samples of a variety of foods and can purchase discount goods that are only available for a limited time.

The company's global chain of warehouses gave it $118.7 billion in revenue in its last fiscal year, behind only Wal-Mart (NYSE:WMT) and Amazon.com (NASDAQ:AMZN).

In addition to its retail prowess, the stock has also outperformed the broad market over the long term, delivering solid results for its shareholders. 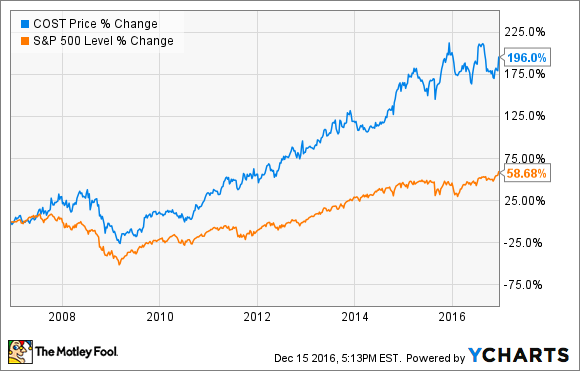 However the stock has struggled this year, and 2016 could be its first losing year since 2008. 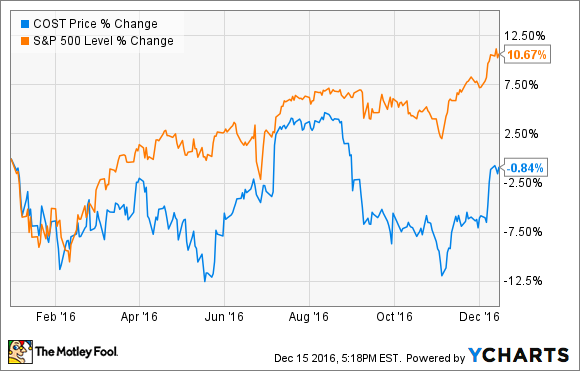 A combination of factors have been pressuring Costco shares this year. Sales and profit growth have slowed due in part to temporary factors like foreign currency translation and lower gas prices. More concerning is the deceleration in same-store sales growth, which has been a multi-year process in the U.S.

Same-store sales are key for Costco. It's the best reflection of future membership growth since sales should be growing along with membership, indicating demand for Costco's service. The slowing same-store sales growth seems to be a result of competition from Amazon and a resurgent Wal-Mart as e-commerce is taking a significant percentage of industrywide retail sales growth. Amazon Prime membership has skyrocketed in the last five years, and now has more members than Costco. Costco has been slow to build e-commerce capabilities, or offer now-commonplace services like buy-online/pick-up-in-store. It hasn't been innovating in the way Amazon and Wal-Mart have, and as a result, its comparable sales are slipping.

Costco is different from most retailers in the way it generates profits. While traditional chains attempt to make a small profit on each sale, Costco instead sells annual memberships -- the base price is $55 -- and operates its warehouses at essentially breakeven as access to its low prices is the incentive for customers to buy memberships. Its gross margins in the low teens would be unsustainable for any other retailer.

Since its profits are dependent on membership, it's crucial that Costco's member base grow, and with a retention rate near 90% the figure has increased steadily in recent years.

Membership has increased by 5% or more since 2011, but membership revenue growth has slowed since 2013, mostly due to a stronger dollar weighing on membership fees from outside of the U.S. Costco's membership fees have consistently been higher than its net income, meaning the company loses around $300 million a year operating its stores.

Finally, the other part of Costco's future that warrants a look is its new store plans. While Wal-Mart and some other retailers have scaled back on new store openings, Costco continues to aggressively open new warehouses.

The company's been growing its store base by about 4% a year, and plans to continue at that pace as management has noticed an opportunity in mid-tier U.S. cities. It's also expanding around the world as it will open its first warehouse in France this year.

Sales per square foot is considered to be the best measure of how efficiently a retailer is using its real estate. As the chart below shows, that number ticked down last year, a sign that the company's store expansion strategy may need a refresh.

One year's results may not be sufficient to draw that conclusion, but the sharp increase in sales per square foot from earlier in the decade seems to have clearly ended. Notably, Costco's sales per square foot is significantly higher than most big-box stores, as Wal-Mart generates sales of about $450 per square foot, so it's clear the company's stores remain popular.

As the charts above show, Costco's membership model still appears to be solid, but there are signs in its same-store sales and sales per square foot that its model isn't delivering the growth that it used to. For a stock trading at a premium to the rest of the retail industry, those patterns could become a problem for the company over the coming years.