Microprocessor giant Intel (NASDAQ:INTC) had some truly phenomenal years in 2010 and 2011. In 2010, the company rebounded nicely from the Great Recession, enjoying year-over-year revenue growth of 24%,  operating profit growth of 179%, and net income growth of 167%.

In 2011, Intel pulled it off again, growing revenue by 24% year over year, all while enjoying robust operating income and net income growth to boot. Of that revenue growth, $3.6 billion came from the integration of McAfee and Intel Mobile Communication, so organic revenue growth was "just" 16%.

Since then, though, Intel has suffered from a bad case of financial stagnation.

In other words, Intel's revenues stagnated during that time.

It's no surprise, then, that 2011 represented a multiyear peak in the company's operating income.

How do things get better?

Earlier this year, we saw Intel announce a restructuring program designed to reduce operating expenses by $1.4 billion on an annual basis. However, even though the company said it expects to see $750 million in savings this year, the company's research and development plus marketing, general, and administrative expenses were up from $14.82 billion in the first nine months of 2015 to $15.7 billion in the first nine months of 2016 (5.92% year-over-year).

It's not clear what kind of operating expense growth rate Intel is planning for over the next couple of years, but I don't think investors can count on seeing Intel stop its spending growth.

So, for Intel to start really boosting its financial performance, it's going to need to do two things:

If Intel can grow its revenue at a pace faster than it grows operating expenses, then that would bode well for the company's overall profitability. That's easier said than done, though, as more than half of the company's revenue still depends on the declining personal computer market.

Intel is going to need to continue to stabilize its personal-computer-related revenues while trying to tap new growth opportunities in other, healthier markets.

Another way to help boost operating margin would be to grow its gross profit margin percentage. Gross profit margin is a function of the company's cost of goods sold -- how much it costs to manufacture, package, and distribute products -- as well as of the selling prices of its products. 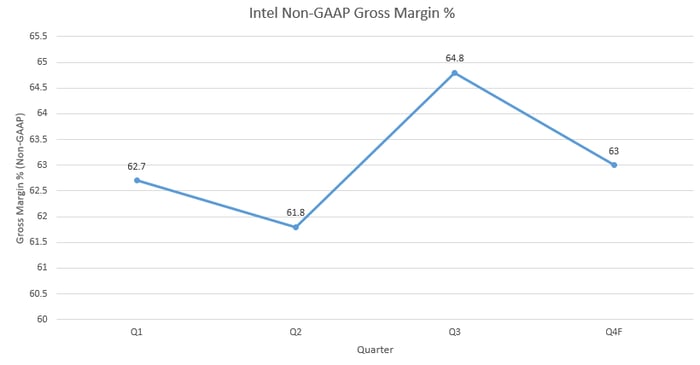 The bad news is that there's not a ton more room left for Intel's gross margin to grow, assuming it maintains the 55%-65% target range. However, if Intel is able to sharpen its execution further and bring its annual gross profit margin percentages up just a point, it could translate into much-needed operating margin expansion.