The folks over at VideoCardz noticed that graphics specialist NVIDIA (NASDAQ:NVDA) has begun selling a "PC Gaming Revival Kit." This kit is designed to allow buyers to turn their gaming-incapable desktop computers into computers that can handle the latest PC games at solid quality and performance levels.

The kit includes the following components:

VideoCardz says it could "only find this kit for Spanish-speaking countries, so it is unclear if this kit will be sold in other regions." Is this kit a good idea? Or is this concept doomed to fall flat? Let's take a closer look. 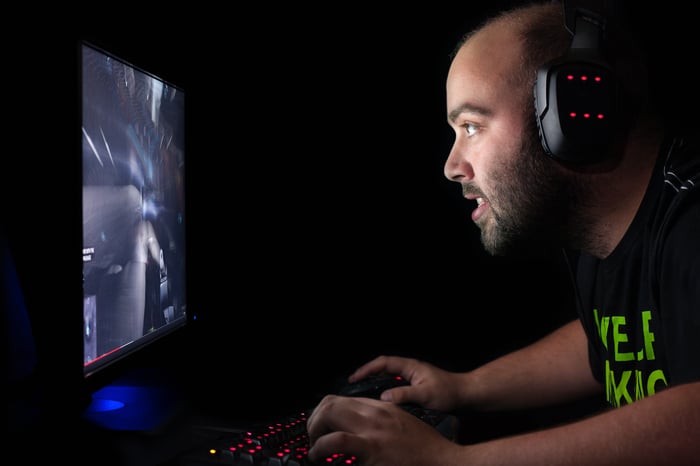 Just about every modern desktop tower computer sold today comes with a central processing unit (CPU) that's more than capable of handling modern video games. The problem is that most of the tower desktops don't come equipped with gaming-capable graphics cards -- they use the relatively weak graphics processors that are integrated with the CPU.

What NVIDIA seems to be trying to exploit here, is that it only takes a new graphics card to turn these gaming-incapable systems into computers that can handle every game out there at good quality settings.

Now, many of these pre-built computers also use very cheap, low-grade power supplies that might not even be able to reliably supply power to a graphics card like the GTX 1060.

NVIDIA's solution to that problem is to throw in a power supply that can handle not only the power requirements of the GTX 1060, but also of higher-end graphics cards such as its own GeForce GTX 1070 and GeForce GTX 1080, ensuring that buyers of this kit can upgrade to higher-performance and more expensive graphics processors down the line.

And, finally, NVIDIA is including a fast flash-based storage drive as well. Most pre-built computers ship with large but slow hard disk drives, which can have a negative impact on the loading times of games.

In all, this looks like a reasonable upgrade kit that should appeal to those who want to upgrade their desktop PCs to be able to handle modern games but might not know what components they need to buy to make that happen. Conceptually, it's a good idea, and NVIDIA seems to have included a set of components that delivers a reasonable trade-off between price on one hand, and performance and capability on the other.

The risk with this concept

Although the concept here is generally good, there are some risks associated with selling such a kit that NVIDIA will need to take steps to mitigate, especially if it tries to offer such kits more broadly.

Users might find incompatibilities with these parts and their desktop systems. For example, a user's pre-built computer might not support the power supply because the system requires the use of proprietary power supplies. There's also the risk that customers find the idea of replacing these components on their own to be too daunting.

The good news is that NVIDIA can take some steps to mitigate these risks.

First, NVIDIA could build a compatibility-checker tool on its website, probably on the product page for this kit. Such a tool should be able to scan one's system, determine what type of pre-built system that it is, and then from there tell the user whether the computer in question supports the kit.

Next, NVIDIA could include a DVD with an instructional video showing users how to upgrade a typical system. NVIDIA already posts a lot of videos on its GeForce.com website that teach people about a lot of this stuff, though, so clearly the company recognizes the importance of educating potential and current customers.

It's in NVIDIA's best interests to get as many PC gamers onto its GeForce gaming platform as possible, and that means coming up with increasingly clever ways to bring new customers into the fold.

To the extent that NVIDIA can make it easier for individuals with non-gaming PCs to turn their computers into gaming PCs, NVIDIA may be able to grow the fundamental total addressable market (TAM) for the PC gaming market.

If NVIDIA is successful in growing that TAM, then it stands to benefit over the long term; not only does NVIDIA get a sale today, but it has a good shot of getting those new users' money whenever they choose to upgrade.

Indeed, users who are brought into the PC gaming fold with something friendly and relatively easy to use, such as the kit discussed here, might be more inclined to buy NVIDIA hardware in the future because of brand recognition and loyalty.