After a string of political events that has some investors concerned, the Indian stock market has taken a tumble. After peaking in early fall, shares have tumbled as much as 15%, as measured by iShares India ETF (NYSEMKT:INDA).

Infosys Technologies (NYSE:INFY) has been no exception. Since reaching multiyear highs over the summer, shares have fallen by over 30% at times. Is it time for investors to jump ship? 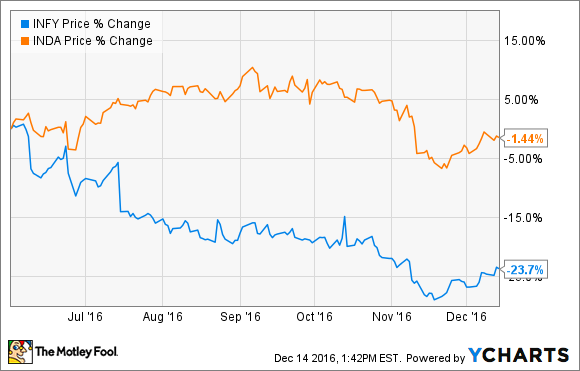 Voters in the U.S. and the U.K. have turned back the clock on globalization. This political flux has caused some to grow skeptical over the India's ability to grow its skilled workforce, which in the past has relied on foreign companies outsourcing jobs -- a trend Infosys has made hay on.

The trouble all started with Brexit back in June. The U.K.'s decision to leave the European Union is still being worked out, but one of the details that needs answering is how the decision will affect trade. Since the British decision to exit, other political factions in Europe have been voicing their desire to hold similar special votes. The isolationist policy shift could end up being a non-issue for India, but the risk nonetheless is there.

It also remains to be seen if the U.S. elections will have any impact on the Indian economy. Uncertainty over President-elect Donald Trump's immigration policy and how outsourcing of U.S. jobs to lower-labor-cost countries like India have contributed to the Indian market's struggles as of late.

And finally is India's self-inflicted "demonetization" scheme launched in November. The surprise policy announcement eliminated the country's two largest bills, the 500- and 1,000-rupee notes, and is an attempt to crack down on the black market.

The government is replacing the now-defunct notes, but the new cash has been slow off the printing presses. The government maneuver has caused disruption to businesses, but the hope is that it will help contribute to modernizing the emerging economy in due time.

What has changed at Infosys?

That is the recent backdrop to Infosys' stock dropping in value. The tech firm known for helping foreign companies outsource and automate jobs and processes seemingly has much to lose from recent developments abroad.

However, the company's last report would indicate otherwise. Revenue and bottom-line profit increased 8.2% and 3.8% year over year, respectively. The company expects revenue growth to be between 8% and 9% through the end of their fiscal year ending in March 2017.

The revenue guidance did raise some concerns as the previous outlook from management was for 10.5% to 12% growth on the year. The company chose to temper expectations in light of the recent political developments.

While profit grew at a slower rate than revenue, much of that has to do with the fact that the company is in a period of transition. Recognizing problems and trends with outsourcing due to the changing global political landscape, CEO Dr. Vishal Sikka had this to say: "Longer-term, I believe it's increasingly clear that our industry's future lies in evolving from a cost-based, people-only model, to one in which people are amplified by software and AI, and are freed to innovate in areas that are strategic to our clients' future."

Infosys has been aware of challenges facing their services for some time now and has been working to mitigate those ahead of the curve. In line with those efforts to move from an "outsourcing of jobs" service to one of a technology-first organization, the company recently made an investment in California-based big data and software firm TidalScale.

Those efforts to evolve the Infosys business are an ongoing work in progress. It has been so far, so good, with the company's efforts to bring its technology solutions forward, leading to a high rate of contract renewals with existing clients and new client contract wins still contributing to revenue growth.

In spite of political headwinds around the world, investors need not worry about Infosys. Despite concerns at home and abroad, the Indian technology company continues to post growth and has been working to adapt its business model to future needs. In the end, demand for Infosys' services will be driven by its clients, not global politics.

However, investors will want to stay tuned for updates. The next reported quarter encompasses the U.S. election results and the front end of India's demonetization efforts. Of keen interest will be how Infosys fared during that time and what the revenue outlook looks like for the rest of the fiscal year.