The FCC is reportedly set to consider a new proposal from the company after a previous plan was shot down earlier this year.

Shares of satellite communications provider Globalstar (GSAT 6.82%) surged on Monday following news that the Federal Communications Commission (FCC) has drafted a new proposed order in response to a revised proposal that Globalstar filed on Nov. 9. The stock was up 47% at 10:45 a.m. EST.

Globalstar stock was hit hard earlier this year when its plan to use satellite signal frequencies for mobile broadband services was shot down by multiple FCC commissioners. Republican commissioner Ajit Pai suggested that the plan would give one company special rights, and large internet companies like Microsoft and Alphabet's Google raised concerns that it would cause interference with other mobile devices. 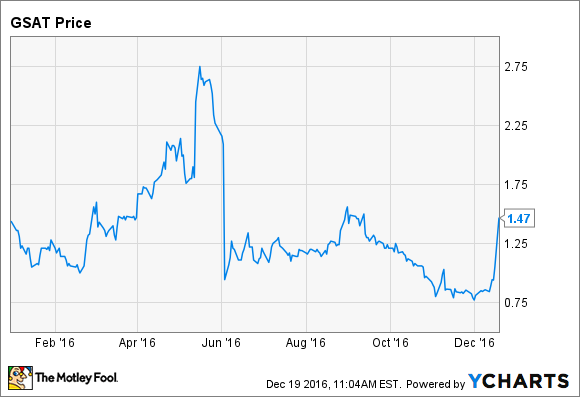 Globalstar filed a revised proposal on Nov. 9, with a modification made on Dec. 7. The company reported on Monday that the professional staff of the FCC had prepared a new proposed order for consideration by the commissioners in response to Globalstar's revised proposal.

In the press release announcing the news, Globalstar explains that its revised proposal addresses the major concerns with its plan: "Globalstar appreciates the recent favorable filings by interested parties and believes its Revised Proposal addresses all reasonable interference and policy-based concerns expressed in this lengthy proceeding. Globalstar's Revised Proposal provides significant protections to adjacent operations, expands the nation's broadband spectrum supply and will improve wireless broadband service for consumers in the United States."

There remains plenty of uncertainty around Globalstar's plan, especially with FCC chairman Tom Wheeler set to resign on Jan. 20. The incoming Trump administration will have two FCC seats to fill, and it's unclear how this will affect Globalstar's proposal. Wheeler recommended in May that the FCC approve the company's proposal.

Investors should expect continued volatility for Globalstar shares. A decision one way or another could send the stock soaring or plunging at the drop of a hat.