Trucking markets might be losing steam, but PACCAR Inc. (NASDAQ:PCAR) isn't taking a breather: The stock's up almost 38% this year as of this writing, lagging peer Cummins Inc.'s (NYSE:CMI) staggering 56% gains but outperforming the broader market by a big margin.

While I'm hugely surprised by Cummins' rally given the headwinds facing the engine maker, PACCAR appears to be in a stronger position going by what CEO Ronald Armstrong said during the truck maker's recent earnings call. Here are four encouraging quotes from Armstrong that should also give you an idea about what lies ahead for PACCAR.

Like most leading truck manufacturers, PACCAR is cautious about the North American trucking markets: It projects industry Class 8 truck sales to be 200,000-230,000 units in 2017, slightly lower than the 2016 midpoint estimate but significantly down from 2015 sales of 278,000 trucks.

However, PACCAR continues to grow its market share despite the challenges. As Armstrong explained: "[W]e continue to increment the product lineup. And we'll continue to do that, as we have done for 20 years. And we think that will lead to continued share growth over the long term." 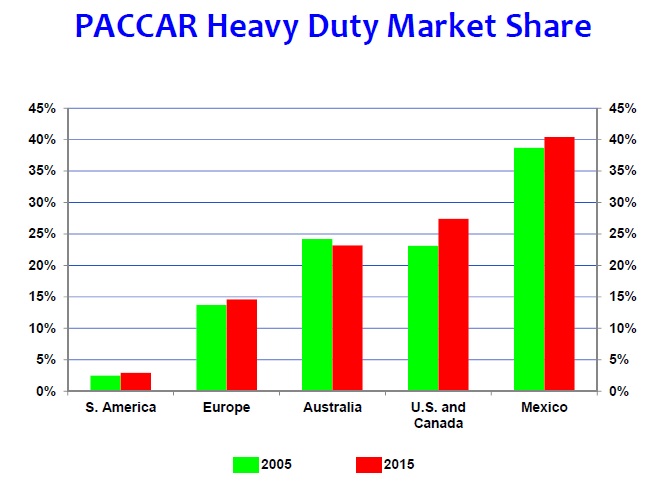 By the end of the third quarter, PACCAR's flagship brands Kenworth and Peterbilt had cornered 31% of the North American Class 8 trucking market, up almost 4 percentage points from 2015. That's encouraging, and investors perhaps shouldn't fear much about the weaker end markets going forward as long as PACCAR continues to grow.

Can you guess PACCAR's strongest market this year? Surprise, surprise: It's Europe, despite Brexit concerns. The region accounted for roughly 28% of PACCAR's total revenue during the first nine months of the year, with sales jumping 14% year over year. Armstrong is looking forward to strong growth in Europe: "We've raised our 2016 forecast for Europe's greater than 16-tonne market to a range of 290,000 to 300,000 units, reflecting strong demand in a steady economy."

For PACCAR, DAF is doing in Europe what Peterbilt and Kenworth are doing in North America. DAF's share in the European heavy-duty market improved a percentage point to hit 15.6% as of the end of the third quarter. DAF started off with a market share of only about 9% when it was acquired by PACCAR two decades ago. Gaining market share in a market ruled by local giants like Daimler and Volvo is no mean feat.

No spending cutbacks despite headwinds

Weak end markets haven't deterred PACCAR from investing in growth: It expects to spend $375 million to $425 million on capital projects and $270 million to $300 million on research and development in 2017, both of which are higher than its 2016 estimated spending.

Armstrong elaborated where the company will put all that money: "These investments will enhance PACCAR's integrated powertrain, deliver advanced driver assistance and truck connectivity technologies, and add additional capacity and efficiency to the company's manufacturing and parts distribution facilities."

Backed by a strong balance sheet and cash flow, PACCAR has invested more than $6 billion in capital projects in the past decade. Higher spending during a downturn reflects the company's intent to build a strong foundation for the future. Going forward, I expect PACCAR's increased investments in powertrain could particularly prove beneficial, as I explain next.

One level up on vertical integration

Not many know that PACCAR manufactures engines as well and is, ironically, turning out to be a major threat to Cummins, one of its key engine suppliers. 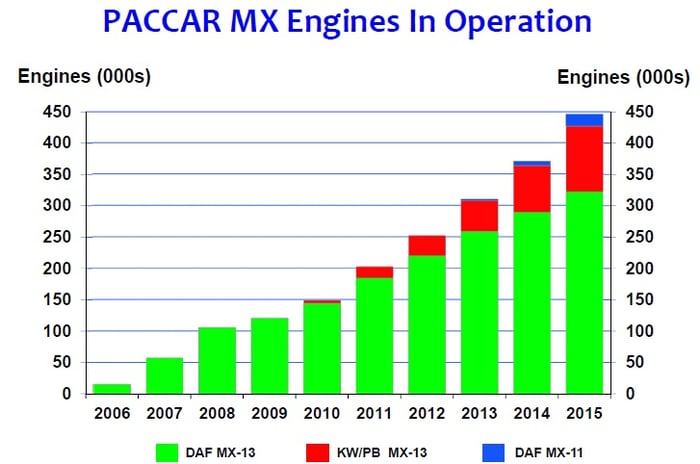 You can see how rapidly PACCAR has ramped up its engines business in recent years. As of the third quarter, PACCAR's own engines powered 47% of its Kenworth and Peterbilt trucks. Its long-term goal is to power 80% to 85% of its trucks on in-house engines, which should greatly reduce its dependency on Cummins.

If that isn't enough, PACCAR launched its propriety axle last quarter in what can be considered yet another step toward vertical integration. Armstrong revealed his plans during the call: "If you look out probably a year or two down the road, this axle will probably be 30%, 40%, 50% of the axles that we put on our North American vehicles. And, of course, the axles we put on DAF products are 100% PACCAR axles."

From trucks to engines to parts, PACCAR has come a long way, displaying its innovative leadership all along. Even if end markets weaken, PACCAR's disciplined capital allocation and focus on growth should steer it ahead in 2017 and beyond.