It wouldn't be practical for stock market commentators to buy every stock they write about. However, readers often ask if we're willing to put our money where our mouth is -- and in many cases, we absolutely are. With that in mind, here are my three largest stock positions as of December 2016 and the reasons I have so much faith in them.

I didn't plan for Bank of America (NYSE:BAC) to become my largest stock holding -- at least not so soon. When shares fell to the $11-$12 range earlier this year, I thought the intrinsic value made the bank too cheap to ignore, so I stocked up. After all, Bank of America was trading for less than half of its book value at that point.

Over the past few months, given the increasing expectation of rising interest rates and the anticipation of President-elect Donald Trump's anti-regulation policies, the bank's stock has soared, and it now trades for nearly double its February 2016 price. 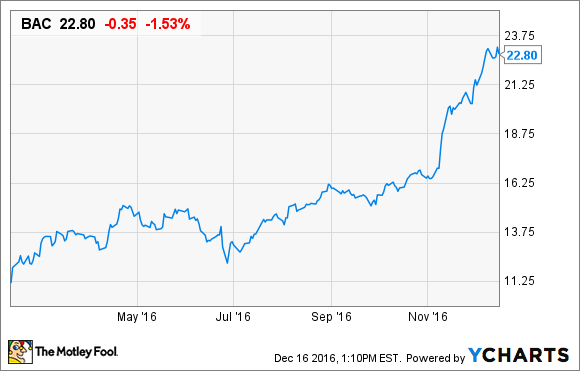 Even so, I have no plans to sell a single share of Bank of America, and I still view it as an attractive investment. The stock still trades for less than its $24.19 per-share book value despite the tremendous improvements made over the past several years. Just to name a few highlights:

2. This shouldn't be a surprise

My second-largest stock holding is Apple (NASDAQ:AAPL). This should come as no surprise, given that it's by far the most popular stock among U.S. investors, according to data from TD Ameritrade. In fact, TD Ameritrade's average client holds 10% of their equity portfolio in Apple stock. No other stock is anywhere near as popular.

My reasons for holding Apple in my portfolio are simple. The company is an innovative industry leader with an extremely valuable brand name and the pricing power that comes with it. The fact that you can buy a perfectly good tablet PC for less than $200, and yet millions of people will still pay several times that amount for an iPad, tells you all you need to know about Apple's product quality and pricing power.

On top of that -- and I know this argument has been used by analysts for years -- Apple is cheap. As I write this, Apple trades for just 13.3 times trailing 12-month earnings and just 12.3 times analysts' estimates for the 2017 fiscal year, despite the expectation of 8.7% earnings growth next year and 11.6% growth in 2018.

Apple missed out on the "Trump rally" due to fears about how the new administration's trade policies could affect profits, but I'm optimistic about Apple's prospects over the next four years. And don't forget that Trump is proposing to let companies like Apple bring their massive overseas cash hoards back to the U.S. at a reduced tax rate.

In a nutshell, Apple has an excellent balance sheet, economies of scale, and top-notch products. And the stock is cheap. While I'm in "wait and see" mode with Apple right now, I would look at any dips in the price as an opportunity to add more shares to my position.

3. Real estate development at a discount

Anyone who reads my articles knows I'm a big fan of real estate as a long-term investment, which is why my third-largest stock holding right now is Howard Hughes Corporation (NYSE:HHC). The company's business model consists mainly of developing master planned communities, selling finished residential land to homebuilders, and capitalizing on the value created by building commercial properties in and around those communities. 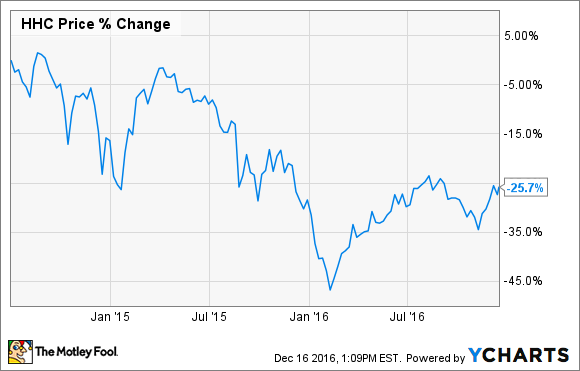 Howard Hughes Corporation has fallen by 26% since mid-2014. The company is highly invested in the Houston real estate market, and low oil prices have taken a toll on that area's economy and slowed the housing market. In order for the company to rally back to its previous level, the energy market will need to recover, plain and simple. In the meantime, the company has several other promising development projects under way.

There are several reasons I'm positive on Howard Hughes' future. The Seaport District redevelopment project is signing up strong tenants, and the company's Hawaii condo developments are performing well, just to name a couple. Lastly, I believe the energy market will rebound under the Trump administration, which should help the Houston real estate market heat up once again.

To keep things in perspective...

While these are my three largest stock positions at the time of this writing, they will likely change over time. For one thing, I own 36 stocks as of this writing (you can click on my portfolio to see a complete list of my holdings), and other than Bank of America, no stock makes up more than 5% of my account's value. And my second- through seventh-largest holdings are all comparable in size.

The point is that even though these are my three largest holdings, they don't represent an enormous portion of my account's value, and I firmly believe in maintaining a well-diversified mix of stocks.