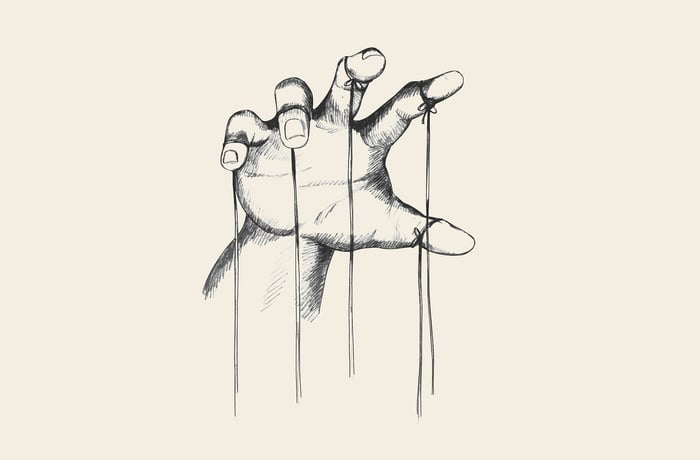 If you read a recent article in The Wall Street Journal about Berkshire Hathaway's (NYSE:BRK-A)(NYSE:BRK-B) investment in Dow Chemical (NYSE:DOW), you might have gotten the impression that Warren Buffett tried to manipulate the market to his advantage by shorting the company's stock.

I think that's a stretch. In reality, Buffett may have made an obvious, yet brilliant, trade.

In 2009, Berkshire Hathaway made a deal with cash-strapped Dow Chemical. Berkshire bought $3 billion of Dow preferred stock at an 8.5% dividend yield. This is obviously very expensive money. Remember that this deal was done during the depths of the financial crisis. Liquidity came at a high price.

Naturally, Dow Chemical would eventually want to part ways with this liability. Berkshire gave Dow Chemical many ways to go out from the preferred, but only one is relevant to this story line. Dow had the ability to repay the preferred stock with common stock if Dow shares traded above $53.72 per share for 20 out of 30 trading days.

That's simple enough. Under a particular set of conditions, Dow can get out of the high-cost preferred stock by giving Berkshire Hathaway a bunch of common stock to replace it.

Well, the day has come

Dow really wants to pay off this preferred stock. To do so, it needs its share price to trade above the $53.72 threshold.

Dow shares are trading higher and higher. But a funny thing keeps happening. Every time its share prices came close to triggering the conversion, its stock would miraculously drop. I mean, look at just how sketchy this chart is: 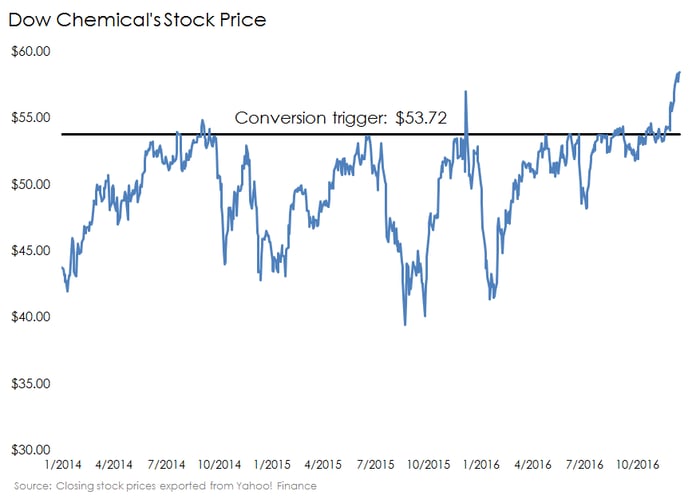 Every single time Dow trades near $53.72 for an extended period, it suddenly takes a sharp dive, eliminating Dow's opportunity get out from underneath the high-cost preferred stock.

This led to some interesting theories, including the occasional implication that Buffett was manipulating the price of Dow stock by shorting it. The Wall Street Journal wrote the following about weird price-action in Dow Chemical shares:

One Yale Law School professor studied the pattern and concluded there was less than a one-in-a-thousand chance the stock's failure to trip the trigger was random.

Dow itself has suspected someone was shorting the stock at around $53 and keeping it from breaching the trigger level for long enough, people familiar with the matter have said.

Under the original agreement, Berkshire was only forbidden from engaging in short selling or hedging its preferred stake until April 2014. Mr. Buffett has declined to comment on whether he or his deputies were shorting Dow stock.

Taken at face value, it reads like simple market manipulation. Dow stock needed to close above $53.72 for 20 out of 30 trading days. Theoretically, Berkshire could short Dow shares in volume just before market close to push the shares below $53.72 per share so that it doesn't trigger the conversion. Look at that chart one more time. It does look like that's what was happening.

The media has run away with this story. A CNBC panel provided particularly silly commentary on the whole deal. One panelist opined that Buffett wouldn't short Dow, given that it could cause reputational damage. Another said that a short position could cause a host of other problems. "Should the stock go through [the conversion price], he's got a loss on" the short position.

There are few dumb billionaires

I'm almost certain Buffett was shorting Dow Chemical at various points over the past few years, but not to manipulate the market to avoid the conversion. Shorting Dow was not only smart, but I also think it would have been dumb if Buffett didn't short Dow stock.

Let's get down to the facts:

Knowing that, shorting the stock at prices around $53.72 per share is as obvious as it gets for Buffett. There were only two possible outcomes:

The first scenario locks in the price at which Buffett can dump Dow stock that he thinks is a bad investment. That's good for Berkshire. The second scenario can potentially generate hundreds of millions in dollars of gains on a short sale, on top of the millions of dollars in dividends it will continue to receive from the preferred. That's great for Berkshire.

In short, Berkshire had an investment opportunity where the only possible outcomes could be described "good" and "great." It's not market manipulation -- it's smart investing.