Please ensure Javascript is enabled for purposes of website accessibility
Log In Help Join The Motley Fool
Free Article Join Over 1 Million Premium Members And Get More In-Depth Stock Guidance and Research
By Travis Hoium - Dec 22, 2016 at 8:47AM

Statoil's sale of Canadian oil sands assets to invest in wind energy is a sign of where energy investments are headed.

Oil and gas giants are starting to take a lot more interest in renewable energy than they have for decades, and it could mean a huge shift in direction for the industry. The latest sign of change was Statoil (EQNR 3.48%), the $59 billion oil giant, selling its Kai Kos Dehseh (KKD) assets in Alberta's oil sands and then winning a wind lease off the coast of New York.

This is an incredible turnaround for any energy company, moving from some of the dirtiest oil production in the world to some of the cleanest energy available. And it's a sign of the times in energy.

Selling out of Canadian oil sands

The sale of KKD assets was made to Athabasca Oil Corporation for CAD 832 million, about 80% of which is in cash now or after contingencies. What's notable is that the sale will trigger between $500 million and $550 million in impairment charges for Statoil on money lost on the oil sands investment.

This will leave Statoil with no oil sands assets anywhere in the world, a shift from a few years ago when oil sands was viewed as a big growth driver for the oil industry.

The wind lease Statoil won is off the cost of Long Island in New York (shown below) in 79,350 acres of water. The winning bid for the lease was $42.47 million. 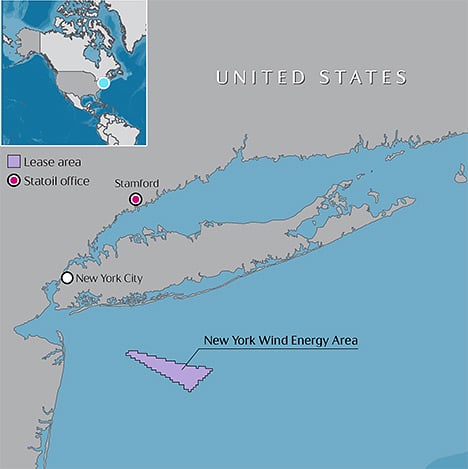 Statoil thinks the space could accommodate over 1 GW of wind projects, which would likely cost in excess of $2 billion, although the initial plan will be to build 400 MW to 600 MW of wind turbines. This will be a new type of development in the U.S., with the 30 MW Block Island Wind Farm the first wind project completed in the U.S. just last week.

The New York lease also adds to Statoil's 40% stake in the Sheringham Shoal wind farm in the U.K., which has been in operation since 2012. It also has two projects under construction in Scotland and Germany.

Why the move to wind?

On the surface, it may seem odd that an oil giant with production of 1.8 million barrels of oil equivalent per day is making billions of dollars of investments in wind energy. But energy companies are looking for growth in markets that provide more stable returns than oil projects, which have becoming incredibly expensive and risky. Wind provides predictable cash flows for decades, so the return on investment has much less risk than oil and gas projects do.

An oil explorer like Statoil with decades of experience developing offshore assets could bring some expertise to the table as well. Wind turbines are still largely an on-shore business so the more expertise a developer has off-shore the better. There isn't a lot of crossover between oil & gas and wind, but this is a place where moving into wind makes sense.

French oil company Total (TTE 1.69%) is another big oil company that's investing in renewables, although it's focusing on solar through its majority-owned subsidiary SunPower. Not only does Total own two thirds of SunPower, it's buying projects from SunPower and even co-developing in regions like Africa and the Middle East. Like wind projects, these solar projects provide a predictable rate of return.

It's telling that big oil companies are starting to pay more and more attention to renewable energy. Part of the reason is that they see less opportunity in their traditional markets, but this also shows how wind and solar are now mainstream energy sources, even for big oil. And that's a shift that seemed unimaginable just a few years ago.