While it is rare for a dividend-paying stock to double in a single year, it can happen. According to data from finviz.com, 53 dividend-paying stocks that had market caps over $300 million doubled in value during 2016. In the list are a handful of large-cap companies, including graphic card designer NVIDIA, pipeline operator ONEOK, and the mining giant Vale.

When the fashion tide turns

Shares of Abercrombie & Fitch have been crushed in 2016, falling by more than half. And it isn't hard to understand why. Comparable-store sales have fallen for 15 quarters in a row, ending with a 14% drop last quarter in the company's flagship-brand stores. Management even expects that the pain will continue into the fourth quarter. Add it all up and analysts anticipate that the company will post a net loss of $0.01 per share for the full year. Ouch.

What's even more worrisome is that company's juicy dividend yield of nearly 6% could be in trouble. Abercrombie has paid out more than $55 million in dividends over the past 12 months, but the payouts could be tough to keep up while the business overall is in the red.

Given all of the above, why should investors expect shares to rebound sharply in 2017?

First, while Abercrombie is not producing earnings, it is free-cash-flow positive. In fact, over the last four quarters the company has produced more than $131 million in free cash flow. That easily supports the company's dividend and share repurchase program.

Second, the company has been operating without a CEO for two years. Any announcement of a potential turnaround specialist getting appointed to the top chair could be enough to get the market excited again.

Finally, we've seen left-for-dead retailers like Pier 1 Imports and Best Buy put up strong performances in 2016, so it is possible that Abercrombie could also rise from the dead.

The container shipping industry has been in a near-depression over the last few years. Overbuilding has caused supply to exceed demand, which has caused charter rates to plunge. Times have been so rough that Hanjin, a major line operator out of South Korea, recently entered bankruptcy.

Understandably, investors have grown wary about the entire sector, which has caused shares of Seaspan to plunge. The company's stock has fallen by more than 42% year to date, pushing its dividend yield up to a comical 16%. Wall Street also believes a cut could be coming soon. 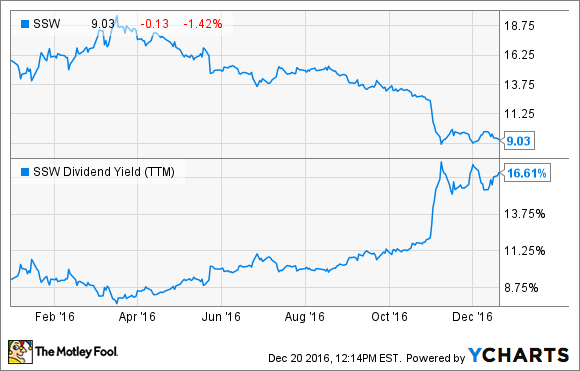 Thankfully, a deeper dive into the company's financial results paints a brighter picture. While Seaspan took a hit from the Hanjin bankruptcy, its revenue and normalized net earnings are actually still on the rise. Better yet, the dividend continues to look well covered, as cash available for distribution to common shareholders continues to exceed the quarterly payment by a wide margin.

Seaspan is also currently deploying capital to take advantage of the Hanjin bankruptcy. The company recently bought four Panamax containerships from Hanjin for a song, which hints that management believes that the tide is starting to turn. If true, then Wall Street could start to reevaluate the company's prospects in 2017, which could lead to serious share-price appreciation from here.

In need of a vitamin B12 shot

GNC Holdings is another troubled retailer that has been left for dead. Same-store sales dropped by 8.5% last quarter. The company's large fixed-cost structure caused earnings per share (EPS) to fall by 13%, though that figure would have been far worse had it not been for GNC's huge share-repurchase program. Add it all up and GNC's shareholders have suffered through a sickening 58% decline year to date.

Despite the poor results, GNC does offer reasons for optimism. The companay is launching a loyalty program to drive repeat purchases, and it is altering its pricing process in order to increase volume. While there's no telling if these moves will solve the company's issues in the long term, they could help stem the sales decline.

While investors wait, GNC remains highly profitable. In fact, the company is expected to produce $2.47 in EPS in 2016, which implies that its stock is trading for just over five times full-year earnings estimates. The company also offers up a dividend yield of 6%, which is well covered by earnings. If GNC's efforts lead to sales stabilization, then the company's stock could be poised for a strong turnaround in 2017.

To be clear, I'm not suggesting that investors should open up a position in any of these stocks, given the problems that these businesses are facing right now. However, it is possible that their beaten-down share prices could make them prime targets for a massive run in 2017. Of course, only time will tell if they can go on to turn their fortunes around.