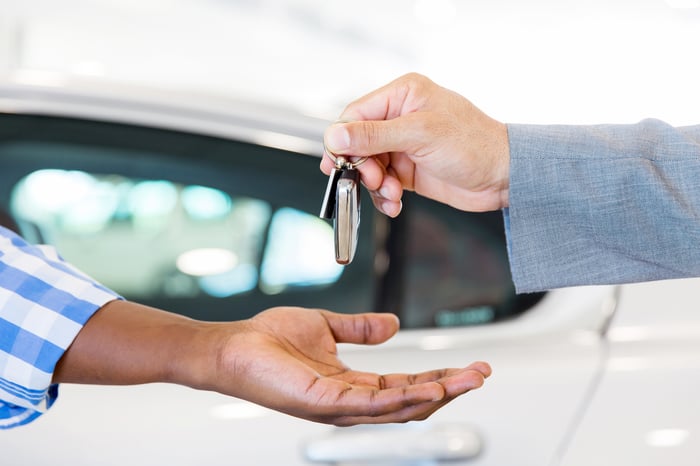 To say that TrueCar, Inc. (NASDAQ:TRUE) has seen its share of ups and downs since its underwhelming IPO in 2014 would be the understatement of the year. TrueCar's founder stepped down after a couple of quarters of brutal earnings meltdowns in 2015, executives jumped ship for greener pastures, and then Chip Perry took over and 2016 became an impressive rebound story. If investors were brave enough to hang on during the ride, 2016 brought some relief in the form of a 35% year-to-date gain, with the stock up more than 74% in the past six months alone -- but can that continue in 2017?

The short answer: It sure can

While TrueCar's business still faces challenges and hurdles, including a peaking new-vehicle sales market in the U.S., there has been monumental progress made in 2016. First, there is the renewed partnership between TrueCar and America's largest dealership group, AutoNation (NYSE:AN). AutoNation and TrueCar's ended partnership signaled how bad things were between TrueCar and its dealership network in general, and that was quickly reflected in its dissolving earnings during 2015.

Fortunately, Perry's top goal when he came on board was to mend these relationships with his "Pledge to Dealers." The plan was to end the commoditization of dealerships on TrueCar's website that had them competing on price alone, and enable them to better market their vehicles with better pictures, videos, and more impactful descriptions. TrueCar also relaxed its data policies, wiping customer information that had not been matched to a purchase after 90 days so that dealerships wouldn't get charged for a TrueCar consumer who had logged on years ago and then separately purchased a vehicle much later.

The renewed partnership with AutoNation was a good sign for TrueCar's potential to continue its rebound next year, but look at just how impressive its rebound has been with revenue per dealership. 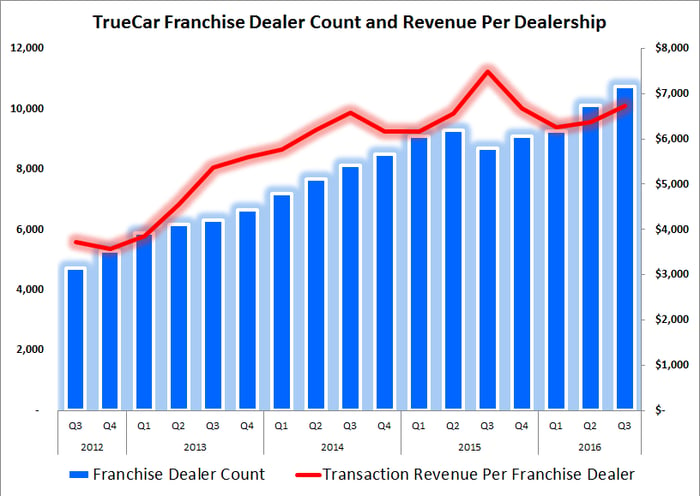 Speaking of good business, look what that's done for its earnings: 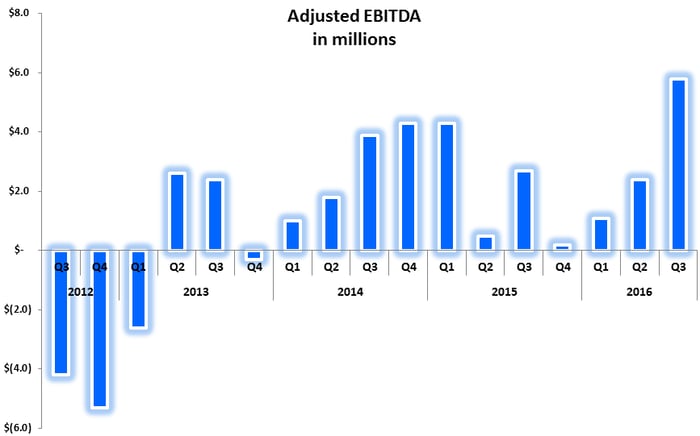 And we can't forget that TrueCar's unique visitors metric hit an all-time high of 7.6 million during the third quarter, blowing away its previous high of 6.7 million. All in all, it's no surprise that TrueCar's beaten-down stock has surged over the past six months. But if the past six months have proven anything, it's that the company is certainly back on track and performing very well.

That alone means it can continue its climb in 2017 despite pressure from peaking new-vehicle auto sales. But make no mistake that the company must continue to execute, because being a middleman between consumers and dealership groups is much easier said than done -- just ask anyone who held shares in 2015.

TrueCar, Inc. Rebounded 35% in 2016. Can That Continue Next Year? @themotleyfool #stocks $TRUE $AN Next Article
Current