If cable television cost less, then perhaps the industry would not have to fear people dropping traditional pay television for digital streaming services, aka, cord-cutting. The problem is that the price of a pay-TV package has steadily increased, and that gives people increased incentive to look for something else.

There are, however, signs in the Federal Communications Commission's 2016 Report on Average Rates for Cable Programming Service and Equipment that the tide has turned. It's possible that the big cable companies, including Comcast (NASDAQ: CMCSA), Charter Communications (NASDAQ: CHTR), and AT&T (NYSE: T), may have seen the light -- or at least they feel the pressure of consumers having other options.

And while the FCC did not find that rates went down during the period, it did report on some signs that the industry, led by Comcast, Charter, and AT&T, might understand that its days of simply pushing prices higher each year have ended. 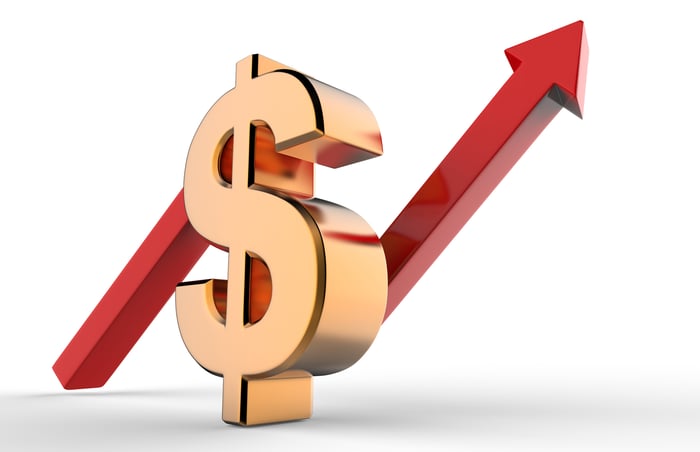 Cable bills have traditionally only gone in one direction: up. Image source: Getty Images.

What does the average American pay for cable?

The FCC looked at two groups of consumers -- ones who lived in a market with competition and ones who did not. Not surprisingly it found that people living in a competitive market pay less for basic service. But the report did find that people living in areas where they have pay-TV choice actually pay more for expanded basic, which the report attributes to more channels being included in the packages offered in those markets.

On a percentage basis that's actually a smaller increase than in past years. Over the past 10 years, from the 2005-2015 FCC reports, the average increase has been 4.8% for expanded basic. In addition, consumers on the expanded basic tier now pay less per channel by 1.8%. That cost came in at $0.46 on the most-recent FCC report, but it's a number that has fallen by an average of 1.4% per year between 2005-2015.

Of course, paying less for channels has been impacted by the number of channels most people get on the expanded basic tier increasing. That's great if those are channels you watch, but much less valuable if it's just more stations to skip that you are forced to buy. While it's too early to say definitively, it does look like pay-television companies have at least slowed their price increases. They are also giving people more channels for their money -- although they may not actually want that.

In the nearly two years since the period this report covers ended, cable companies have faced increasing competition. Comcast has not changed much during that period, but AT&T bought DirecTV and now offers its own streaming service that undercuts cable pricing. Charter also made a major acquisition since this reporting period, picking up the former Time Warner Cable, but it has not changed its operating structure or pricing.

Consumers who just get basic or expanded basic -- which are the two most-popular packages -- may be the most willing to consider cutting the cord as those choices become better. That could keep price increases low, force prices to stay flat, or even lead to more pay-TV companies offering low-cost products like AT&T has done with its streaming service.

It might be too soon to say that market forces are going to push cable pricing down, but that has happened at least for people willing to move to a streaming alternative. Cable companies are at least somewhat feeling the heat from a changing market and these could be the first steps toward average cable prices going down.

What Is the Average American Paying for Cable? @themotleyfool #stocks Next Article
Current