On the positive side, the company completed its $10.45 billion acquisition of Verizon's (NYSE:VZ) wireline business in California, Texas, and Florida. That deal basically doubled the size of the company giving it approximately 3.3 million new voice connections, 2.1 added million broadband customers, and 1.2 million additional FiOS video subscribers.

That's a transformative deal that should change the company's direction going forward but early results were mixed. In the two quarters Frontier has owned the Verizon properties it has lost total subscribers. Some of that was expected, since moving millions of people to a new provider is not an easy task, but the transition has taken longer than expected.

Just how difficult became more obvious on Nov. 1 when the company reported Q3 earnings. Its total customer base had fallen from 5.22 million at the end of Q2 to 5.07 million at the end of Q3. Frontier blamed that on revenues from CTF Operations being "impacted by a slower than expected recovery of FiOS gross additions and an increased accounts receivable reserve associated with the resumption of normal customer collection activities."

Those were disappointing results that sent the company's share price down. Still, despite the company's 2016 struggles, it has laid the groundwork for a better year ahead. 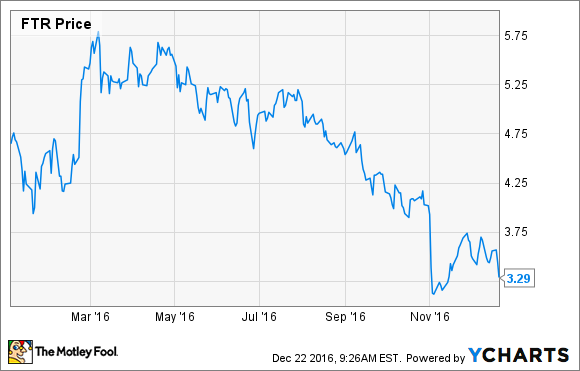 What to expect from Frontier in 2017

Heading into Q4 Frontier changed its management structure to better reflect its new footprint. The company explained the setup in its Q3 earnings release:

Frontier today announced a new customer-focused organizational structure and the creation of Commercial and Consumer business units. The updated structure will result in enhanced focus on the commercial segment and more efficient capital allocation. Current regional support functions including Engineering, Finance, Human Resources, Communications and Marketing are being centralized to achieve improved operational performance as well as expense reductions.

Basically, the moves set the company up to market and service its consumer as well as its business products across its now much-larger footprint. It's hard to know if that will benefit consumers, but it will help the company save money. That's important because a big part of justifying spending $10.54 billion for the Verizon properties is that operating on a larger scale would be more efficient.

That part of the deal, the cost-savings-through-synergy part, has gone very well. The company had originally expected an annual savings of $1.25 billion, but has increased that to $1.4 billion. Those numbers won't be fully achieved until 2019, but over $1 billion will be realized in 2017.

In order for Frontier to reverse its 2016 declines it needs to stabilize its user base. Losing video customers is to be expected as most cable providers are shrinking due to cord cutting, but losing internet subscribers goes against current trends because people who drop cable or never had it in the first place still need internet service.

CEO Daniel McCarthy addressed the subscriber loss issue during the company's Q3 earnings call, which was transcribed by Seeking Alpha (registration required). He noted that the CTF subscriber trends had improved as Q3 progressed but acknowledged that they are not where they should be.

"This slower rate resulted because we began marketing during the seasonally slowest sales period, we on-shored our customer contact centers, which initially impacted our principal sales channel negatively and we resumed customer collection processes," he said.

Going forward he expects those issues to cause a drag on Q4, but resolve in the new year. If that happens, Frontier's outlook changes dramatically. Even simply stabilizing the numbers justifies that CTF deal, gives the company a long-term future, and makes it an attractive acquisition target in a market that has very few of those left.

McCarthy and Frontier have mostly delivered on their promises, aside from stumbling with the transition from Verizon. It seems possible they could right the ship and the reasons they give for the ongoing issues do make sense. It's certainly not a lock that 2017 will be Frontier's best year yet, but the company has all the pieces in place for that to happen.