The hotel industry is not a high-growth segment of the market with a lot of surprises, particularly not at the top, where companies have thousands of properties and forecast low-single-digit changes in sales. Yet Marriott International (NASDAQ:MAR) shares have grown 25% so far in 2016. Here's what drove that growth and why the company still looks like a great long-term play.

Marriott made a lot of headlines in 2016. In September, the company finally closed its acquisition of Starwood Hotels & Resorts, adding hundreds of thousands of rooms to its portfolio and a major asset in Starwood's loyalty program. Other important announcements from the year include new technology upgrades to its hotels and growth in what could be important regions like Africa. 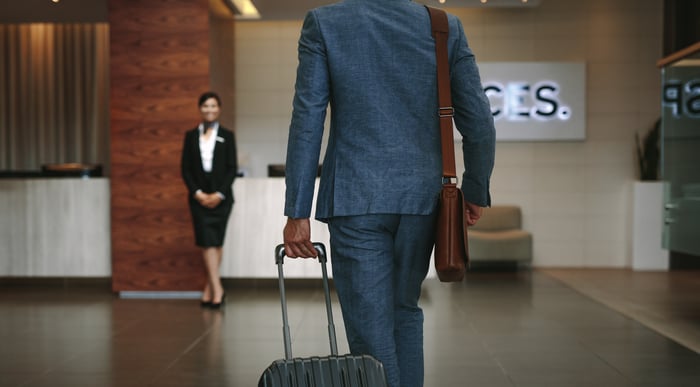 Most importantly, though, seems to be Marriott's major year of earnings growth. The company has done a great job of growing earnings on top of modest revenue increases. In the most recent quarter, Marriott's adjusted earnings per share (excluding costs for the Starwood acquisition) grew 17% year over year; revenue grew 8%, which included eight days of Starwood results. On a comparable basis for both companies, revenue per available room (RevPAR) grew 2.2% worldwide.

The merger still has value to be unlocked

Marriott's acquisition of Starwood Hotels could still have plenty of value to unlock that doesn't seem fully priced into the stock. Following the merger, Marriott now controls 30 different brands, from economy to luxury, and it's expanding that footprint internationally with more than 1.6 million rooms available or in the development pipeline.

An interesting part of Marriott's business is that virtually all of its properties are owned and operated by third parties as franchises. This business model allows Marriott to take a percentage of revenue from the hotels, without the risk of developing new properties. With so many brand assets, compared to 13 brands under Hilton Worldwide (NYSE: HLT), Marriott is likely to grow its franchise model even more effectively.

Another way Marriott's now larger portfolio of brands and room count could help the company unlock future value is through better deals with online travel agents (OTAs) such as Priceline Group (NASDAQ: PCLN), which take a percentage of the sale for matching travelers with their hotel. By having such a large share of the global room count, Marriott will likely be able to negotiate better deals that might improve its revenue from these third-party sales.

Too late to buy in?

Marriott will certainly face risks in the future, both near and long term. Slowing GDP growth in the U.S. has made business travel, one of Marriott's most important segments, slower than previously anticipated. The recent Q3 numbers for the U.S. economy were positive, which bodes well for the future, but if that growth doesn't hold up, this segment could lag.

Then there's the risk of terrorism and global unrest throughout the world, something that could keep people from staying in hotels. In addition to that is the rise of Airbnb and lodging services like it that could decrease Marriott's occupancy. Regardless, Marriott is taking the right steps to set up future growth opportunities in important markets and segments, and its assets and competitive advantages make it continually look like the best bet in this industry.

Now that Marriott stock has made such an impressive jump in the last few months, its stock is starting to look somewhat expensive at 29 times earnings. Compare that to Hilton, trading at around 19 times earnings, or Intercontinental Hotel Group (NYSE: IHG) at just 9 times earnings. However, there seems to be good reason for the stock's higher valuation. It looks like a stronger business with plenty of expected earnings growth, which is why Marriott's forward P/E is 20.

Marriott stock could certainly see a dip in 2017 as its valuation pulls back, but trying to time a dip like that is a (small-f) fool's game, and the stock continues to look like a great long-term play even after the recent run-up.

Marriott Stock: Is It Too Late to Buy In? @themotleyfool #stocks $MAR Next Article
Current