While Santa Claus may not be real, the Santa rally is a real enough phenomenon.

The term refers to the idea that the stock market tends to rise during the period just before Christmas through the end of the year. In its length, the phenomenon is actually closer to Hanukkah, with the rally period being the last five trading days of the calendar year and the first two trading days after New Year's Day.

Unlike the mythical jolly fat man who sneaks into people's homes to bring them Christmas presents, the Santa rally is not an every-year phenomenon. It's statistically what usually happens -- "since 1969 the Santa Claus rally has yielded positive returns in 34 of the past 45 holiday seasons," according to the 2016 Stock Trader's Almanac -- but "usually" does not mean "always" and 2016 could be an exception.

As the story goes, at least the version of the Santa Claus fable told in the United States, children who have been good receive presents and naughty kids get nothing. A Santa rally occurs nearly 80% of the time, but it's generally a meaningful, albeit small, boost. According to the Stock Trader's Almanac the gains for the seven-day Santa rally period come out to an average of 1.7% using data going back to 1896. Last year there was no Santa rally as the Dow opened on Dec. 24 at 17,593.26 and closed lower after the traditional seven-trading-day rally period, at 17,158.66. That capped an overall down December and showed that, just because markets usually do something, does not mean they always will.

Santa may also stay home this year -- not because of any sort of misbehavior, but because the market has been riding high after the 2016 presidential election.

That suggests that with the Dow already trading at record or near-record highs throughout December, the rally may have already occurred. Santa may stay home this year, as he did last year, because the optimism that usually pushes stocks higher as the year ends has already been priced into the market by people enthusiastic about the economic impact of the new government. 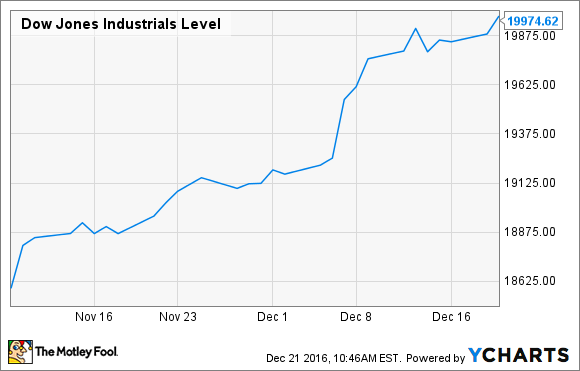 Santa baby, hurry down the chimney

If there's anything we've learned from the short period since Trump went from reality show host to president-elect, it's that the man, his actions, and the impact of his actions are hard to predict. Many expected the election of a candidate with no political track record to send markets down -- if only due to uncertainty.

Instead, the idea that a businessman would be in the White House and the fact that Trump has named numerous Wall Street players and other rich folks to his Cabinet have pushed forward a large rise in prices. It's reasonable to think that at some point the excitement will cool off, but past history or logic may not apply until the new president shows how he will make decisions.

Since the election, the market has been in one long rally. That might dim the effect of the post-Christmas period, but the fundamental optimism that Trump will ease regulation and create a better climate for business is not likely to fade until he actually takes office. For now, the markets are being driven by an orange-tinged Santa whose impact remains theoretical. It seems likely that the rally will continue at least through Inauguration Day, perhaps with some down days due to profit-taking.

What Is the Santa Rally? @themotleyfool #stocks Next Article
Current