Investors in industrials giants Caterpillar Inc. (NYSE:CAT) and ABB Ltd. (NYSE:ABB) must be a happy lot this year, what with both stocks staging remarkable comebacks after a morbid 2015: Caterpillar is up almost 38% and ABB 19% this year as of this writing. Interestingly, though, both stocks might've ended the year with similar gains had ABB not reversed course even as Caterpillar inched higher until about two months ago.

So why did ABB's shares suddenly lose favor with investors,and what's propelling Caterpillar higher? More importantly, which among the two stocks should investors buy today?

The challenges facing Caterpillar and ABB

Though both are industrial companies, Caterpillar and ABB are into diverse businesses and face different challenges and opportunities. As the world's largest manufacturer of construction machinery, mining equipment, and gas turbines and engines, Caterpillar is into a highly cyclical business. The commodities bubble brought the mining industry to a standstill, hitting Caterpillar's fortunes hard. The downturn has lasted longer than expected, and Caterpillar is still struggling to grow its resource industries (mining equipment) business. 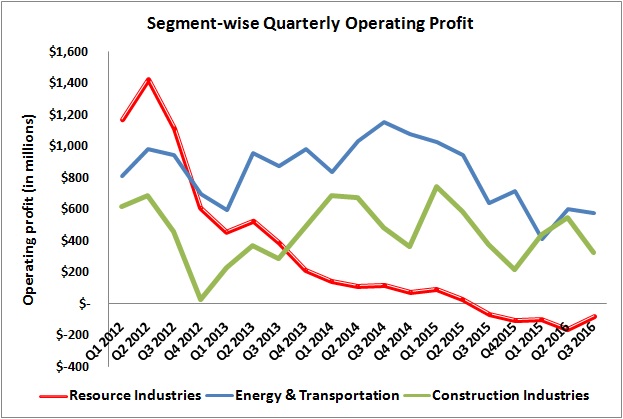 This year's oil price shock came as a fresh blow to Caterpillar and sent sales from its energy and transportation division tumbling. The market, however, saw a silver lining as key commodities like iron ore bounced back. The optimism among investors hit a whole new level after Donald Trump's victory in anticipation of renewed infrastructure spending in the U.S.

In contrast, ABB shares were holding up well until about late October after the Switzerland-based company reported 13% decline in its third-quarter orders, blaming Brexit. Unlike Caterpillar, Trump's victory did little to renew investors' faith in ABB as it's more of a defensive industrial company that primarily serves resilient industries like utilities through its four operating divisions: electrification products, discrete automation and motion, process automation, and power grids.

So does that mean Caterpillar will flourish under Trump's presidency and ABB won't? Well, there's no straight answer to that question, simply because no one really knows what lies ahead. Both companies have strong yet different growth catalysts.

The growth story for Caterpillar and ABB

Having already slashed costs significantly in the past couple of years, Caterpillar's fortunes now depend almost entirely on macro factors. If Trump kicks off infrastructure spending as anticipated and OPEC's proposed production cut revives the oil and gas industry, Caterpillar could win big. Otherwise, there's little to be excited about. Caterpillar's sales are still under tremendous pressure, so much so that management expects 2017 revenues to be similar to this year's, which is projected to come in roughly 17% lower than 2015 levels.

ABB's strength, on the other hand, lies in the resilience of its power transmission business and its expertise in providing automated solutions in an increasingly technology-driven world. Consider this: ABB recently joined hands with Microsoft to provide its industrial customers access to Microsoft's cloud technology. ABB's digital base includes 70 million connected devices and 70,000 digital control systems. In fact, ABB doesn't consider itself an industrials company: It calls itself a "pioneering technology leader," reflecting its focus on technology.

ABB will also revamp its power grids division, which has come under fire from one of the company's largest shareholders, Cevian Capital AB, for low profitability. ABB rejected Cevian's idea of spinning off the division, and instead plans to bolster it via digitalization, green solutions, and partnerships. An example is ABB's recent partnership with Fluor (NYSE:FLR) to build substations across the globe to enable utilities to efficiently transmit and distribute electricity. I believe greater focus on power grids should help ABB tackle downcycles even better than it has over the years. 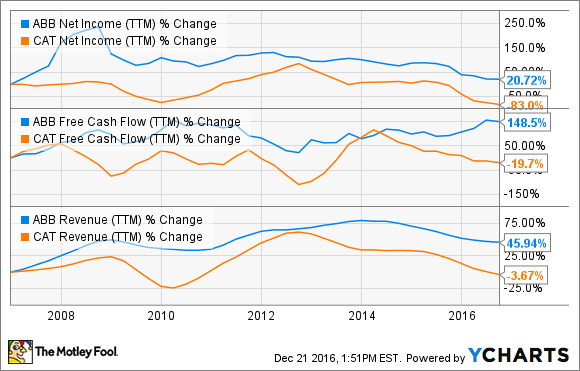 That chart also proves my point about how being a defensive industrials company places ABB in a stronger position than Caterpillar.

Dominance in the mining and construction-equipment industries makes Caterpillar a great turnaround play, but I believe it's too early to take a call. Recovery in oil or metals isn't enough until prices stabilize at levels profitable enough for oil and gas and mining companies to revive stalled projects and purchase new equipment. As for infrastructure spending, concrete maker U.S. Concrete's (NASDAQ:USCR) CEO Bill Sandbrook just told CNBC that he doesn't expect "tangible benefits" of Trump's policies to flow in before 2018 and 2019. In other words, Caterpillar stock has gone ahead of itself and looks overvalued today.

Meanwhile, ABB looks poised to deliver superior operational performance, returns on investments, and shareholder returns going forward. While both stocks currently yield around 3.5% in dividends, ABB's dividends look safer. So if I were to buy one stock today, I'd go with ABB.