Pfizer (NYSE:PFE) appears to be on track to end 2016 with its stock price at roughly the same level as it began the year. Could the new year present better opportunities for the big pharma? Yes, but challenges remain. Here are three of Pfizer's biggest risks in 2017.

While Pfizer's overall sales increased by a solid 13% year over year in the first nine months of 2016, the company faces some significant competitive threats. Pfizer is already seeing big sales declines for its array of products that have recently lost or are about to lose patent exclusivity, particularly Lyrica and Celebrex. This group of products accounts for over 8% of the company's total revenue. 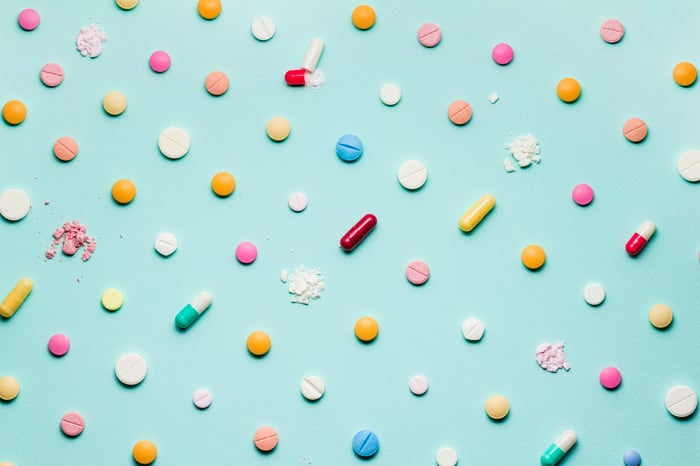 Sales for autoimmune disease drug Enbrel are also falling due to competition. Biogen (NASDAQ:BIIB) won European regulatory approval in January for Benepali, a biosimilar to Enbrel. Pfizer attributed lower sales for Enbrel in 2016 primarily to the entrance of Biogen's biosimilar. Enbrel currently ranks as Pfizer's third-highest drug in sales generated.

Although sales for Sutent aren't slipping yet, that could change in 2017. Exelixis (NASDAQ:EXEL) announced clinical results in October for its kidney cancer drug Cabometyx in a head-to-head comparison with Sutent. Cabometyx handily beat Sutent in efficacy and the safety results were about even. Exelixis is moving forward with seeking regulatory approval for its drug as a first-line treatment for kidney cancer.

Pfizer is counting on getting help from its pipeline. The company currently awaits for regulatory approval for eight programs, including atopic dermatitis drug crisaberole and an additional indication for cancer drug Ibrance in Europe. Failure to get a green light for commercialization of any of these drugs would hurt. Crisaberole, for example, is expected to generate peak annual sales of $2 billion or more if approved.

The drugmaker's pipeline also includes 33 late-stage clinical programs. Experimental cancer drug avelumab is the focus of eight of these studies. Because there's always a risk that safety issues could arise in a clinical trial, Pfizer could be especially wounded if any problems occur with avelumab.

It's even possible for Pfizer to successfully complete clinical testing, obtain regulatory approval, and still have a pipeline setback. How? The company's late-stage pipeline includes five biosimilars. Some drugmakers have been able to hold off approved biosimilars from being marketed in the U.S. Pfizer could run into the same kind of roadblock.

Pfizer is involved in several legal cases. One in particular could present a risk for the company next year. In 2014, the Regents of the University of California filed a lawsuit against Medivation seeking 10% of revenue from the sale of prostate cancer drug Xtandi. The trial is scheduled to begin in May 2017. Pfizer acquired Medivation in September of this year.

The possibility of losing this lawsuit could cost Pfizer quite a bit. Xtandi has generated well over $2 billion sales for Medivation from its FDA approval in 2012 through the first half of 2016. Some analysts peg peak annual sales for the drug at $5 billion. If Pfizer has to fork over 10% of its Xtandi revenue to the University of California, the big drugmaker would feel the pain.

Pfizer's biggest worry stems from the competitive threats. Biogen and Exelixis aren't going away. Expect to see sales for two of Pfizer's biggest-selling drugs to fall in the face of competition.

While the company could experience pipeline setbacks next year, investors probably don't need to fret too much. Pfizer's pipeline is robust enough to withstand a few failures -- although too many would present a more serious problem.

The outcome of litigation is difficult to predict. Both sides obviously think they have solid arguments. An adverse decision in the Xtandi lawsuit could hurt Pfizer's stock in 2017. However, whichever side loses will probably appeal. I doubt Pfizer's actual financials will be affected next year even if it loses this lawsuit.

Do these risks outweigh the potential rewards for investors interested in buying Pfizer stock? I don't think so. The drugmaker claims one of the more attractive dividends around. It should be able to achieve respectable (although not spectacular) earnings growth over the next few years. I expect Pfizer's shares to perform better in 2017 than this year despite facing some real risks.