Freeport-McMoRan Inc. (NYSE:FCX) shares are up around 25% or so over the last three months, and Silver Wheaton Corp.'s (NYSE:WPM) stock is down nearly 40%. That's a divergent situation that might leave investors wondering which is the better company to buy. The answer is to look past the short term and examine the core business models that drive this duo. And in this case, the loser looks like the long-term winner. Here's why.

There are two big stories driving Freeport-McMoRan's stock today. The first is that copper prices are heading higher. That's good for the miner's business since that metal makes up a large part of its business. It happens to be one of the world's largest copper miners.

The second big driver is that Freeport is finally starting to gain some traction in its efforts to deal with an ill-timed, and debt-laden, investment in oil. That has included success in selling off some oil assets and putting cash from asset divestitures and stock sales toward paring down its debt. Freeport has made huge strides on the debt front and expects to be able to cut its net debt in half by the end of 2017 from 2015 levels, assuming copper prices hold at around $2 a pound. The company's average realized price for copper was $2.18 per pound in the third quarter. 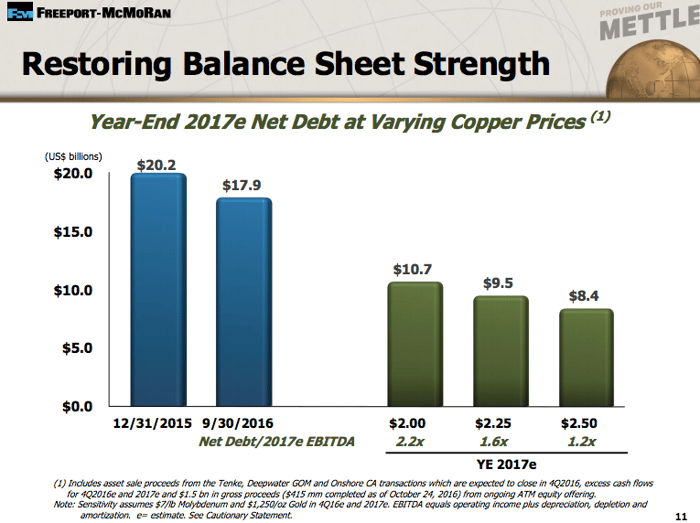 Debt on the downswing.

If you're into turnarounds, Freeport is pretty interesting. That said, there's another piece of the puzzle here that's worth highlighting. Like most miners, the company has been focused on cutting costs. For example, it reduced its costs in its copper business by 20% year over year in the third quarter. That's been really helpful in the company's turnaround effort, too. So, while rising copper prices have been headline-grabbing, you shouldn't overlook the absolute necessity of trimming expenses during the recent downturn.

Costs are an ongoing battle for a miner. For example, as mines age, they get more expensive to run. And even worse, as markets get euphoric, discipline on the expense side of things often starts to wane, which is why Silver Wheaton is so interesting.

Silver Wheaton is a streaming company. That means it gives miners cash up front for the right to buy silver and gold at reduced rates in the future. That makes it something of a specialty finance company that gets paid in precious metals. But the key is that its agreements lock in low prices.

Silver Wheaton's costs for silver, about 60% of its business, are in the $4 an ounce area. Its cost for gold, which makes up the rest of the top line, is around $400 an ounce. As long as the mines it has invested in are producing, Silver Wheaton's costs are going to be ultra low relative to most miners. And they are contractually locked-in rates. 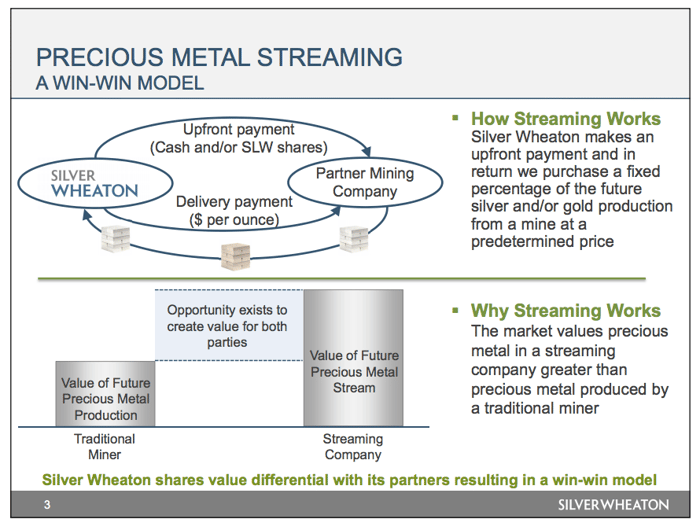 This model is actually a little counter-cyclical, too, compared to the precious metals business. That's because commodity downturns actually present a great buying opportunity for streamers like Silver Wheaton. For miners, streaming deals represent an alternative to other forms of financing that tend to get very expensive during downturns.

Yes, falling precious metals prices have weighed on Silver Wheaton's stock price. However, the fundamental underpinnings of its business remain the same. Its low costs are baked in.

Freeport-McMoRan's business is finally looking like it's on the mend. That's a great thing, but it doesn't change the overall business model for the miner, where reining in costs can be a key factor in profitability. Silver Wheaton's streaming business model has low costs built in. Silver Wheaton looks even more enticing once you add in the investments made during the precious metals downturn that have been leading production growth higher. Conservative investors should go cheap, and stick with Silver Wheaton's low cost business model even though the near-term price swings in the commodity market are favoring Freeport today.