I once listened to a panel of Foolish investors discuss the greatest investing lessons they'd learned. One lesson that stood out -- espoused by Fool Tim Hanson -- was entirely counter-intuitive. And that lesson is giving me reason to get greedy with shares of Paycom Software (NYSE:PAYC).

We often think the market undervalues typically "cheap" stocks, whether that be on a price-to-earnings or free-cash-flow basis. But that's not where the misjudgment is really happening, he argued. Instead, it is the stocks that appear "expensive" on these metrics, and therefore don't trade for even higher, where the real mis-match is occurring.

Consider that in 2013, several of the so-called "FANG" stocks all traded for more than 70 times trailing earnings. And yet, we know from experience how dominant and important these companies are. That helps explain why, since July of the same year, this group of companies has utterly crushed the broader market.

A strong argument could be made that we under-valued them back then because they appeared expensive. I believe that could end up being the case with Paycom -- a company that aims to provide not only payroll, but a whole suite of HR solutions on a single cloud-based platform. Here are the three big reasons I'm excited.

A strong moat with lots of optionality

Paycom aims to provide much more than antiquated payroll services like Paychex and ADP. Instead, it aims to help companies manage:

The reason I point all of this out is because the services that Paycom offers combines the duties of entire departments within a company into one application. That, in essence, is Paycom's stated mission: "ongoing development of a single application to lower labor costs, drive employee engagement, and reduce exposure."

If a company finds a solution to all five of these areas (the four above, plus payroll), they have truly found a time and money saver.

After training employees to use the system, become familiar with it, and store data on Paycom's servers, customers would go through significant headaches if they wanted to switch to another provider. That gives Paycom an enviable advantage: high switching costs. With a 91% retention rate for customers of over three years, I think that moat is evident.

But that's not all; an under-appreciated part of Paycom's mission statement is the "ongoing development" of the application. Because the application is on the cloud, updates are easily and seamlessly performed. And because the world is constantly changing, Paycom's business model gives it the flexibility (read: optionality) to easily change directions when the market calls for different products.

Paycom currently has over 15,000 clients. That allows the company to gather data on the behavior of thousands of different companies -- giving it an edge on providing the types of solutions customers want, but may not have access to. The competition, meanwhile, just has to guess based on their smaller data set.

Invest with those who have skin in the game

Chad Richardson founded Paycom in 1998. He was able to foresee where the Internet was going, how it could change the way business is conducted, and what it would mean for the HR world. He still runs the company today as CEO, and his skin is very much in the game: he owns 13.2% of shares outstanding -- a sum worth about $370 million.

But that's not all. He has also developed a culture within his companies that shows employees are bought in. According to Glassdoor reviews, Paycom has garnered high accolades. 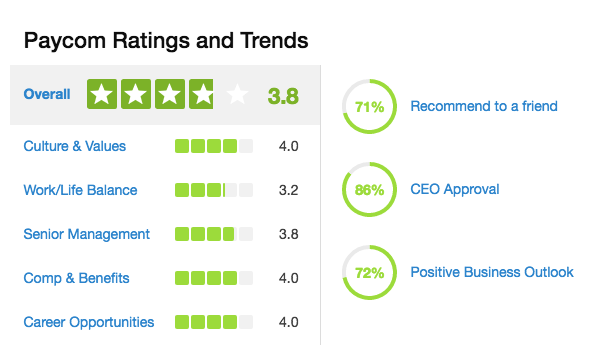 That's crucial, because Paycom's sales force is the key to its future. Consider: most companies have a payroll provider that they've been using for years. Because of the aforementioned high switching costs, these companies don't want to switch over to Paycom unless they have a really good reason to.

That's where Paycom's sales force comes in -- they have to wow HR departments enough to convince them that switching over is worth the headache. And that's why I'll continue to watch the Glassdoor reviews, as well as continue to make sure Richardson is running the company with his skin in the game.

Finally, I think it's crucial to invest in companies that don't rely too heavily on any one customer. With Paycom, no one customer accounts for more than half of 1% of all sales. That means that if any one customer decides to leave Paycom, it doesn't necessarily mean that it would make a significant dent in Paycom's prospects.

The company has also been able to continue growing its cash hoard while not taking on copious levels of debt.

You won't find that at every Software-as-a-Service (SaaS) company out there -- and it sets Paycom apart. When the company experiences its next rough patch -- whatever the cause may be -- the cash on hand will provide flexibility to help it survive and thrive over the long run.

When Motley Fool trading rules allow, I will be getting greedy with Paycom myself, adding a position to my portfolio despite the "expensive" looking P/E of 67. In the end, I think we might look at today's price as a steal.