Investors in IBM (NYSE:IBM) have missed out on a great market rally in recent years. 2016 provided a welcome bounce, but the long-term trend is still mighty negative as Big Blue's strategic makeover continues to hurt more than it helps. Will 2017 see another deep dip?

Since the start of 2012, when Ginni Rometty took over IBM's CEO office from Sam Palmisano, IBM shares have gained a meager 2% -- assuming that you reinvested all dividends along the way. On the same dividend-adjusted basis, the S&P 500 index has almost doubled: 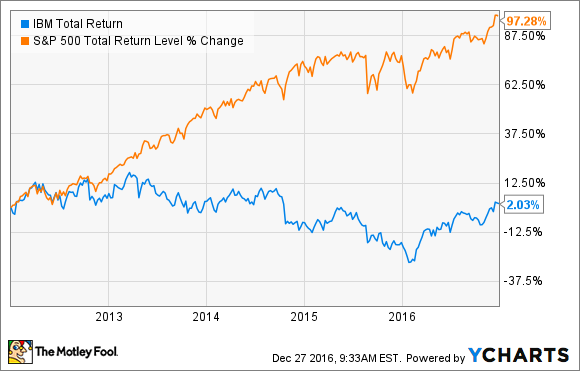 In 2016, the market roles were reversed. The market-barometer index has gained a dividend-adjusted 13% while IBM soared 26% higher.

Rometty took a sharp turn in a new direction five years ago. The all-you-can-eat IT buffet that worked so well under Palmisano has been dismantled in favor of a tighter focus on IBM's most promising growth markets. Server hardware and chip manufacturing operations have been spun off and sold out. The new IBM is all about its "strategic imperatives," centered on cloud computing and artificial intelligence.

Drastic strategy changes tend to hurt, at least at first. This one has been going on for five years and still brings the pain on a consistent basis: 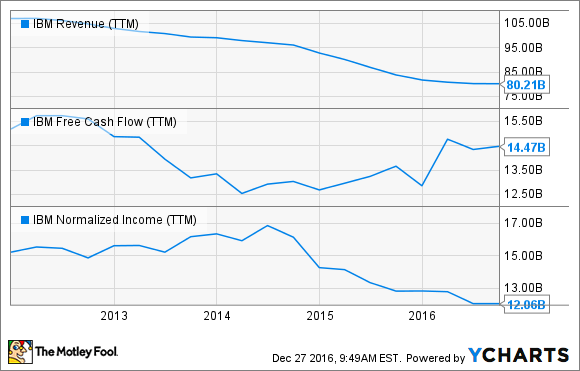 Above all else, IBM's sales have declined year over year in each of the last 16 quarters. That's enough to drive a nervous man distracted.

Long story short, I don't think IBM shares are primed for a massive plunge in 2017.

Sure, the 2016 momentum may run out of steam. Big Blue's refocus continues apace, and I would not be surprised to see top-line sales fall even further. But this is one of those cases where the end truly justifies the means. IBM is building an artificial intelligence monster, wrapping it in warm blankets of cloud computing delivery systems, and unleashing it to do battle in the next era of business computing.

The company is starting partnerships with medical specialists, while also clearing pathways for the IBM Watson system into the Internet of Things industry. The payoff might not start in 2017, but the worst of the transformation process pain should be behind IBM shareholders.

If share prices hold steady or fall back again, that only adds muscle to IBM's famously generous dividend and share buyback programs.

Master investor Warren Buffett owns 8.5% of IBM these days, and he's still buying more Big Blue shares. He is clearly seeing through this bothersome period of transition and expecting great returns for the long haul.

Hard to bet against this guy, isn't it?