On Nov. 22, 2016, Activision Blizzard (NASDAQ:ATVI) announced a new compensation agreement with CEO Bobby Kotick. On top of Kotick's base salary of $1.75 million, the company put in place incentives for Total Shareholder Return (TSR) targets -- TSR includes dividends along with change in price in calculating a stock's return -- and the achievement of a "Transformative Transaction," or a series of related transactions that, if achieved, could grant Kotick up to 500% of the 2020 Long-Term Performance Grant Target Value, which will be determined by the Compensation Committee at a later date. If Kotick maximizes these incentives, he stands to earn tens of millions of dollars above his base salary. Suffice to say, Kotick will be rewarded if he makes decisions that increase the value of the company and rewards shareholders.

Here's a breakdown of the rewards for each level of TSR achieved:

To unlock the reward for the Transformative Transaction, Bobby Kotick must make a transaction, or series of transactions, that results in accretive value to Activision Blizzard's then-shareholders of at least 15% or more over the company's market capitalization as of the previous date before the public announcement of the transaction. The added accretive value must remain for six consecutive months following the announcement. If Activision's market cap increases 15% from a transaction, Kotick will receive an award equal to 100% of the 2021 Long-Term Performance Grant Value. If Activision's market cap increases 30%, he will receive an award equal to 150%.

The new compensation agreement gives Bobby Kotick the incentive to repeat his accomplishments over the last 10 years in which Activision's stock has increased over 200%, outperformed its two largest rivals -- Electronic Arts and Take-Two Interactive Software -- and handily outperformed the S&P 500 Index. 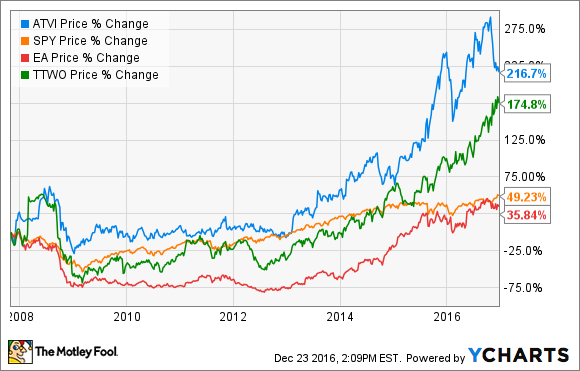 There are three transformative transactions Kotick made within the last 10 years that allowed Activision to outperform. The seed of this outperformance was planted in 2007 with the merger of Vivendi Games (Blizzard Entertainment).

Over the last several years, Activision has sought to eliminate the seasonality that blankets the video game industry. The ups and downs of hardware cycles make it difficult for video game publishers to generate consistent year-over-year revenue growth. Plus, sales of new games, as with most retail stores, is very seasonal and is dependent on the timing of new blockbuster game launches.

With the subscription-based business model of Blizzard's franchises, notably World of Warcraft, Activision took the first step in smoothing out its year-round revenue and cash flow stream.

Before Blizzard, Activision's cash flow was lumpy year over year.

For shareholders, the additional cash flow stream allowed management the opportunity to announce, in February 2010, a $1 billion share repurchase and the company's first annual dividend. The share repurchase represented about 7% of Activision Blizzard's market value at the time, and the dividend yield was about 1.4%.

However, the former owner of Blizzard, Vivendi, acquired a 68% controlling stake in Activision Blizzard as part of the merger. Eventually, this turned into a problem.

Regardless of the improvement in Activision's annual cash flow generation, Vivendi's majority ownership was believed to be an anchor on Activision Blizzard's stock price from 2009 through 2012. The stock was dramatically underperforming the S&P 500. Something had to give. 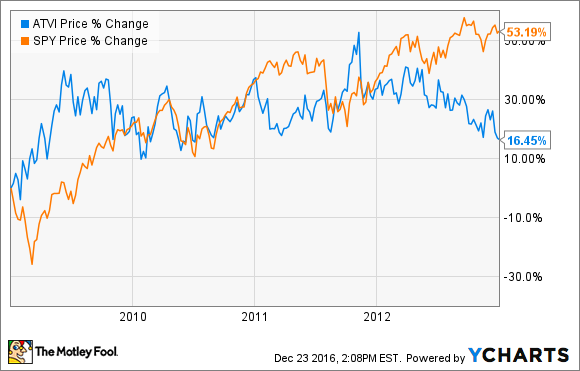 On July 25, 2013, CEO Bobby Kotick and a group of investors announced the plan to buy back the majority of the Activision Blizzard shares owned by Vivendi for $13.60 per share. Activision stock's previous-day closing price was $15.39. The day after the announcement, the stock opened above $17 per share and has not since traded as low as the price before the announcement.

The benefit to shareholders from this deal was the dramatic reduction in shares outstanding, which is why the stock jumped the day after the announcement. On Dec. 31, 2013, the diluted share count was 1,035 million, and by the end of 2014, the share count stood at 726 million as a result of the Vivendi transaction.

The buyout of the majority of Vivendi's Activision Blizzard stake can be viewed as an extension of the benefits from the Blizzard merger. The 30% reduction in shares outstanding resulted in an increase of Activision Blizzard's free cash flow per share of 42%, from $1.15 on Dec. 31, 2013, to $1.63 on Dec. 31, 2014. The stock price increased proportionally to the increase in free cash flow per share.

The King acquisition was structured as an all-cash deal utilizing $3.6 billion of Activision's offshore cash with the balance funded by a loan under Activision's credit agreement with its lenders. U.S. companies have been in a dilemma over offshore cash because of repatriation taxes -- a tax on offshore funds brought back to the home country.  With the King acquisition, headquartered in Ireland, Kotick found an attractive use of offshore cash and also took advantage of a low interest rate environment.

The full benefit of the King acquisition is still to come. Investors do not seem to be fully valuing the inclusion of King in Activision's financials given Activision's current price-to-free cash flow ratio (P/FCF) of 13 (P/FCF is the same as the P/E ratio, except you substitute free cash flow for earnings). This is about the same P/FCF Activision traded for between 2009 and 2012, before Kotick announced the Vivendi buyback and propelled the stock price to market-beating performance.

CEO Bobby Kotick, in essence, has created an interactive entertainment holding company. And the story is not over. Bobby Kotick's new compensation agreement makes it very likely, perhaps inevitable, that there will be another transformative, highly accretive deal in the next four years. The agreement gives Kotick the incentive to repeat the types of rewarding, transformative deals he made on shareholders' behalf since the Blizzard merger in 2007. Even if we take Kotick's incentives out of the equation, Activision shareholders could still experience a market-beating investment considering the stock's low P/FCF as well as the ongoing development of new intellectual property, like the recent release of Overwatch, and the opportunities in the fast-growing market of mobile gaming as a result of the King acquisition.