The tech titan activated a whole bunch of iPhones and iPads for the holidays.

Surprising no one, Apple (AAPL 0.96%) had a busy Christmas morning, and I'm not talking about Tim Cook giddily opening that new Lego Batman set he's been asking for. The Mac maker's activation servers were working overtime, as all those gifted iPhones and iPads were turned on for the first time.

Flurry Analytics estimates that Apple grabbed an impressive 44% of mobile device activations from Dec. 19 to Dec. 25., more than double the 21% that Samsung grabbed over the same time frame. Huawei ranked No. 3 with 3% of activations, and LG's 2% earned it the No. 4 spot. This year Hanukkah and Christmas had an overlap, with Hanukkah starting on Dec. 24. Flurry's estimates cover the week leading up to Christmas as well as the first two nights of the Jewish holiday. 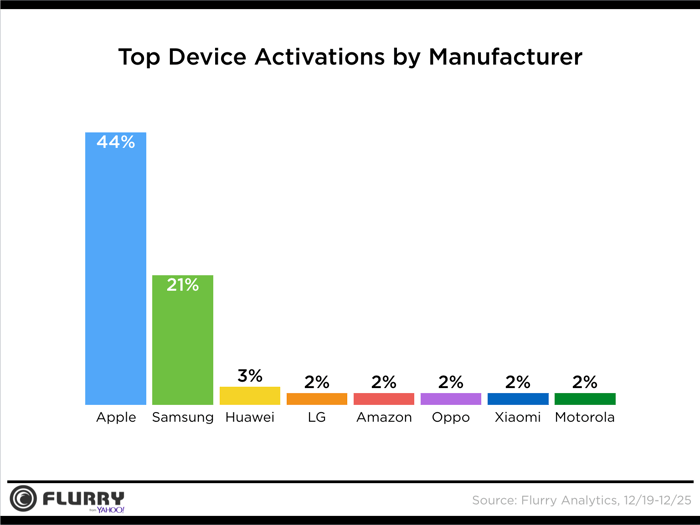 The analytics specialist also notes that Huawei and LG were able to earn their respective spots through sheer volume. Both companies offer a plethora of different devices, including low-cost models, that collectively boosted each manufacturer's rankings. Neither Huawei nor LG had a specific model rank particularly highly.

The (continued) rise of the phablet

The ongoing trend toward large devices and phablets is only gaining momentum. You may recall all the pressure that was on Apple circa 2012-2013 to come out with a bigger iPhone, to which Apple's initial response was to launch an entire marketing campaign about one-handed use.

2014's push into phablet territory with the iPhone 6 and 6 Plus not only created a massive upgrade cycle for Apple, but also validated and accelerated the shifting consumer preference. You can see in Flurry's estimates how phablets are taking over (Flurry technically only considers the Plus models as phablets.) Note the big jump from 2013 to 2014. 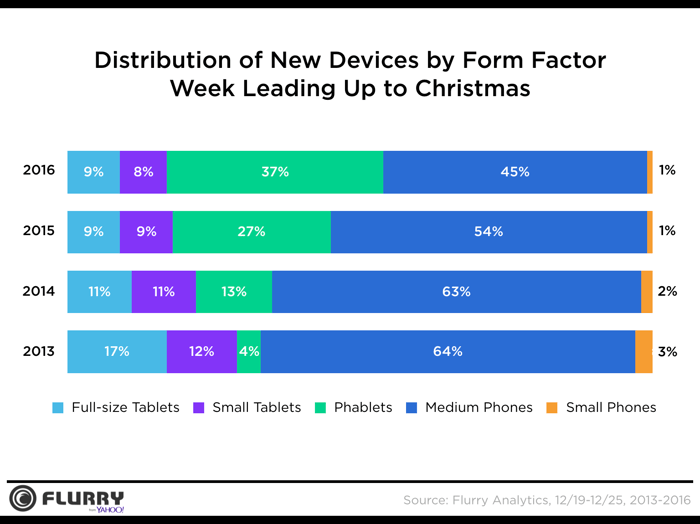 Phablets are here to stay.

While Apple's activations are a good sign, they're slightly less than last year, when Apple grabbed 49% of device activations. And last year, Hanukkah was in early December and ended before Flurry's measurement period. Assuming that Apple indeed gets a Hanukkah boost, Apple fared slightly worse when you factor in the timing difference -- 5 whole percentage points lower for the year that included two days of Hanukkah.

Here's the rub: Flurry's estimates only account for percentages, and say nothing of absolute volumes. While it's undoubtedly encouraging that Apple is still the top manufacturer by a healthy margin in terms of holiday device activations, the company's iPhone sales this quarter are very much in question right now. There have been plenty of reports that iPhone demand is waning and that the iPhone 7 cycle may not be as strong as in years past, which makes sense given Apple's seemingly peaking iPhone sales in fiscal 2016. Investors will know in less than a month, when Apple reports fiscal first-quarter earnings at the end of January.