Costco (NASDAQ:COST) has intentionally put most of its focus on its stores rather than its website and digital operations. That makes sense on some levels because it's the in-store experience that drives people to join the warehouse club. Whether it's the thrill of discovery, getting to sample various foods, cheap meals and snacks, or simply pricing plus not having to wait for delivery, the chain's model has proven resilient.

While retailers including Wal-Mart (NYSE:WMT) and Target (NYSE:TGT) are scrambling for ways to integrate their digital operations with their physical stores as a way to fight Amazon's (NASDAQ:AMZN) convenience and pricing advantage, Costco has stayed the course. It's not that the company does not have a digital operation -- it has a website, apps, and it sends members regular deal emails -- it's just that it has not been a focus for the chain.

CFO Richard A. Galanti explained the company's digital strategy during its Q2 2016 earnings call in March (transcript from S&P Capital IQ). He acknowledged at the time that the area was not a strength for the company, but did not seem overly worried.

"We try to not avoid it or be arrogant about it, but also recognize we try not to freak out about it," he said. "I really feel pretty good fundamentally about our company and what we've got going on. ... And things could change, but we're -- we'll keep trying to do a few things on the Internet more, but we're going to take it steady."

Steady seemed like a bad idea in a fast-moving market, but some numbers the CFO shared in the company's Q1 2017 earnings call nine months later suggested the warehouse club may be on the right track. 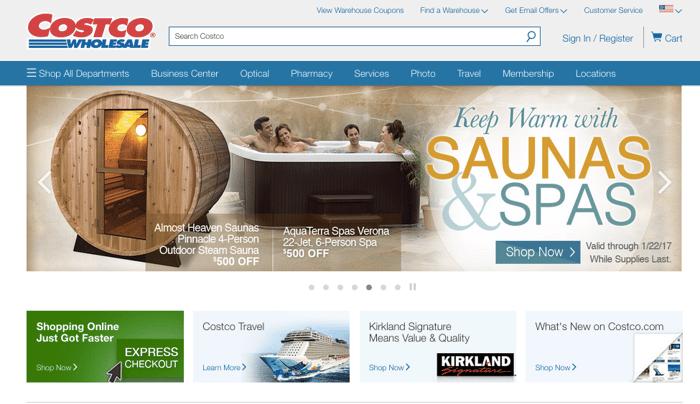 Costco has put more focus on how its website works behind the scenes. Image source: Costco.

How has Costco digital improved?

"Online, we're now in of course in the U.S., Canada, UK, Mexico and more recently Korea and Taiwan," Galanti said during the Q1 call, which was transcribed by Seeking Alpha (registration required). "For the first quarter sales and profits were up, total online sales were up 8% in the quarter and 7% on a comp basis, pretty choppy essentially the first several weeks and the last several weeks of the quarter were in the mid singles with the middle part of it in the low doubles, if you will."

That's below the 20.6% e-commerce sales growth Wal-Mart put up in its most-recent quarter and well below the 26% Target said its "digital sales channels" grew by in its most recent quarter. Still, both Target and Wal-Mart spent heavily to grow concepts like ordering online and picking up in the store while Costco has taken a more subtle approach. Galanti laid out the three areas the company has been quietly developing during the call:

Galanti also pointed out what should be considered an encouraging trend for Costco investors.

"Over the past three weeks and that would include the last week of Q1, which is the Thanksgiving week, and the first two weeks of our second fiscal quarter, e-com sales were up in the low to mid teens including some results for both Black Friday and Cyber Monday," he said. "And of course, that's not withstanding significant amount of TV sales which were essentially flat in dollars and up 15% in units."

Costco may never focus on digital like Target and Wal-Mart have been forced to do, and it may continue to lose consumers focused only on price to Amazon. But, so far, without much of a digital strategy the warehouse club has held strong in the face of growing online competition.

These numbers suggest that by making modest investments in keeping its digital operation modern, Costco should be able to grow its digital business. It's likely the company will never become a digital-first operation or even one that mixes and matches the way Wal-Mart and Target have, but these are strong signs that the warehouse club won't completely ignore digital and that it will grow that segment.