With the Dow Jones Industrial Average flirting with the 20,000 mark and the S&P 500 up by 8% over the last two months alone, stocks may seem to be getting expensive. While there's no way to accurately time the market, and stocks could continue to climb from here, I'd like to focus on two high-income stocks that look like bargains right now.

A big margin of safety and room to grow

While it's not the biggest player in the industry, self-storage real estate investment trust CubeSmart (NYSE:CUBE) is a high-dividend REIT with room to grow and a big margin of safety. And now you can buy shares at a 21% discount to their April peak.

As of the end of the third quarter, CubeSmart owns 471 storage facilities and manages another 291, much of which are located in markets with attractive qualities. For instance, 78% of CubeSmart's properties are in markets with lower-than-average supply of self-storage buildings, the best ratio among peers. In addition, the average household income within three miles of a CubeSmart facility is higher than that of industry leaders, and population density is greater. In other words, there are a lot of people who live around CubeSmart storage facilities, and these people have money to spend and a shortage of other self-storage options.

The self-storage business has a built-in margin of safety. Specifically, self-storage properties have lower ongoing maintenance costs and lower turnover expenses than most other property types. In fact, industry leader Public Storage has said that it could break even with just 30% occupancy. With occupancy rates currently in the 90s, it's fair to say that CubeSmart's profitability is secure.

The company has done a great job of growing, with $2.8 billion in acquisitions since 2008, including nearly $295 million in the first three quarters of 2016. It also grows through development, and currently has about $270 million of new properties in development for 2017 and 2018.

Finally, CubeSmart is financially solid with investment-grade credit (BBB/Baa2) and a 37% debt-to-assets ratio. The company has grown its dividend impressively in recent years, from a $0.28 annual dividend rate in 2011 to $1.08 today, which translates to a 4.1% yield as of this writing.

The biggest REIT of all is still one of the best

Shopping mall REIT Simon Property Group (NYSE:SPG) is the largest REIT in the market. Thanks to the market's expectation of rising interest rates, you can now buy Simon for 24% less than the share price just a few months ago and enjoy a 3.8% dividend yield. 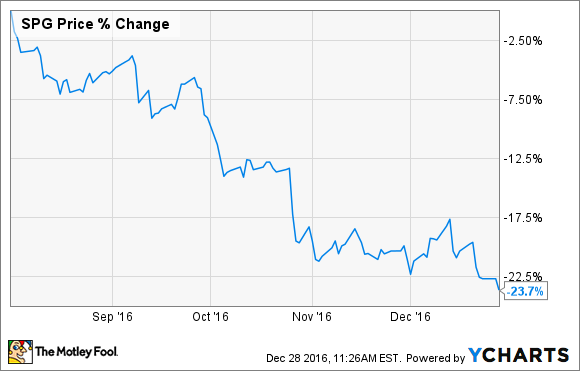 Although the loss of nearly a quarter of the share price may raise some eyebrows, it's important to point out that Simon Property Group's business is doing just fine. Simply put, Simon's objective is to own the best places to shop in the United States.

Chances are that you can think of a crummy, run-down mall that you've been to. Simon's properties are the opposite, with higher-end and trendy retailers, modern facilities and amenities (things like valet parking and free Wi-Fi), and lots of restaurants and newer stores to keep up with changing consumer tastes. For example, lots of Simon's mall properties contain specialty grocery stores such as Whole Foods.

Additionally, one reason I love Simon Property Group as a company is that it actively tries to partner with its tenants to provide the best shopping experience possible. One particularly innovative example is Simon's exclusive cash-back gift card designed to be used at its malls. 5% of every purchase is automatically credited back to the gift card -- for example, if you buy a $100 Simon gift card to give as a holiday gift, and the recipient spends all $100, an additional $10 will be put on the gift card, effectively making the gift worth $110. How successful this was remains to be seen, as we don't have any holiday data yet, but the point is that Simon is willing to innovate and collaborate with its tenants, which should prove to be a long-term competitive advantage over peers.

The company has grown aggressively since its 1993 IPO, with a total of $40 billion in acquisitions since then and a lot of development activity. And the growth keeps coming. In fact, the current development and redevelopment pipeline is nearly $2 billion in size.

The combination of aggressive growth and smart management has paid off tremendously for investors. Since its 1993 IPO, Simon has produced annualized total returns of 16.1%, on average -- a remarkable level of performance to sustain for 23 years. To put this in perspective, a $10,000 investment in Simon's IPO would be worth more than $300,000 today.

As far as the financials go, Simon Property Group has the highest investment-grade credit rating (A) of any U.S. retail REIT, and boasts a low 28% debt-to-capital ratio, one of the best in the real estate industry.

To be perfectly clear, these stocks have underperformed in 2016, but there's a clear reason behind it -- expectations of rising interest rates. And before you buy, it's important to be aware that this trend could continue, especially if rates rise faster than expected. For example, if President-elect Donald Trump's growth plans are successful, we could see rates shoot up even higher than the Federal Reserve has forecast, and these stocks could drop as a result.

However, these businesses are all long-term winners, and if you approach them with a reasonably long investment timeframe (say, five years or more), there's no reason to believe they won't deliver strong performance.