Berkshire Hathaway (NYSE:BRK-A) (NYSE:BRK-B), the conglomerate led by billionaire Warren Buffett, has done quite well in 2016 -- up about 26% with just over a week to go in the year. Much of the company's gain has taken place in the last six weeks or so, and since Buffett was an outspoken Hillary Clinton supporter, the reason is somewhat ironic: the election of Donald Trump as the next U.S. president.

There are a few reasons Berkshire Hathaway stock has risen by 16% since the election. For starters, Trump's pro-growth policies could be great news for many of Berkshire's subsidiary businesses. Manufacturers like Precision Castparts could see a rise in orders, railroads like BNSF could have more goods to transport, and consumer-goods companies like Fruit of the Loom could benefit from more disposable income in consumers' pockets. 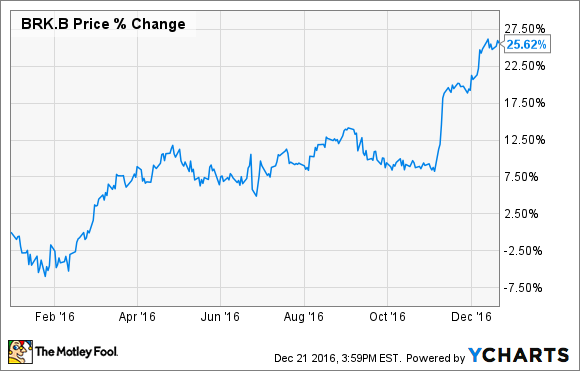 However, Berkshire's insurance subsidiaries could turn out to be big winners under a Trump presidency, for multiple reasons. First, Trump's anti-regulation platform could save money on compliance expenses and make it generally easier for insurers like GEICO and the rest of Berkshire's insurance companies to do business.

In addition, consider the general business model of insurers. Insurance companies don't necessarily try to profit from collecting premiums. Instead, the goal is to invest the premium income collected and generate income until it's paid out for claims. Trump's policies could cause interest rates to rise significantly in the coming years, meaning that Berkshire could earn billions more on its reserves. As of the third quarter, the company has about $85 billion of cash and equivalents on its balance sheet, so this could translate to a serious boost.

Finally, don't forget about Berkshire's stock portfolio, a lot of which is invested in the financial industry -- by far, the best-performing sector since the election. Like insurance companies, banks stand to benefit from lower regulation and higher interest rates, and Berkshire has huge investments in Wells Fargo, American Express, and Bank of America, as well as significant investments in several other companies in that sector.

Other Berkshire stocks have performed well also. For example, major Berkshire investment IBM is up 10% since the election, and Phillips 66, in which Berkshire owns a $7 billion stake, is up 8%. Granted, the Trump rally hasn't helped all of Buffett's subsidiaries and companies, but the point is that it has helped a lot more than it has hurt, and that's why the stock has performed the way it has.

Will the Trump rally continue?

This is the billion-dollar question for Berkshire Hathaway and its investors. While I'm not predicting the direction of the overall stock market, I do think banks and insurance companies will have more room to run if Trump rolls back regulations on their industries, invests in infrastructure, and slashes taxes.

As one specific example, B of A recently said that a 100-basis-point (1%) increase in interest rates would translate into an additional $7.5 billion per year in net interest income for the bank. Not only does the Federal Reserve project that interest rates will rise by more than double that amount over the next few years, but growth initiatives could also mean more loans, and relaxed regulation could mean significantly lower overhead. Plus, even after its big rally, the bank's stock still trades for below its book value.

The same logic can be applied to the rest of Berkshire's financial stocks as well as its insurance subsidiaries. If Trump follows through on his promises, Berkshire's rally could be just getting started.

As an outspoken Hillary Clinton supporter, Warren Buffett is strongly in favor of higher taxes on the rich, among other left-leaning policies. However, from a purely business standpoint, it doesn't get much better for Berkshire's subsidiaries and stock investments than Donald Trump's pro-growth, anti-regulation platform. Whether Trump actually follows through with his plans, and whether they work, remains to be seen, but for now, it's fair to say that Berkshire Hathaway and its investors were big winners in 2016 as a result of the election.