While the market has done well this year, not every stock had a great 2016. It's no secret that it has been a rough year for the solar industry, for example. Not even industry leaders such as First Solar, Inc. (NASDAQ:FSLR) have been immune to the carnage. The stock, which traded over $70 early in the year, has fallen as much as 60% over the past six months because of industry headwinds and company-related issues.

While a pullback was warranted, investors have been overly pessimistic and are overlooking First Solar's exceptional balance sheet. In fact, the company is currently one of the S&P 500's cheapest on a price-to-book value basis. This, combined with the company's solid historical operating performance, should deliver strong returns for patient investors.

The global solar photo-voltaic industry is highly competitive, with commodity-like pricing on solar panels that's in a state of seemingly perpetual decline. This is great for customers and the industry as a whole, but it forces solar-panel manufacturers to constantly improve their technology and cut costs simply to survive. As such, investors should expect peaks and troughs in profitability from these companies.

Last month, First Solar laid out its plan to jump straight from the company's current Series 4 technology to Series 6. This move will allow the company to begin producing the larger, cheaper Series 6 panels in 2018 instead of 2019. It will also result in the company's taking $500 million to $700 million in asset impairments during the fourth quarter, and it requires production cuts in 2017. Those changes mean lower sales and earnings next year, which investors have responded to negatively.

However, even with the lower sales and increased investment, the company expects to generate as much cash as it invests in 2017. Thus, its current net cash balance of around $1.5 billion is not expected to change significantly over the course of the next year. 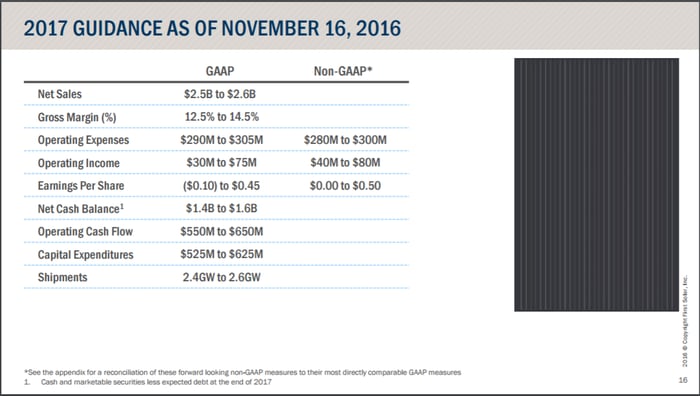 The prevailing view by investors is that 2017 will be a challenging year for the solar industry, due in large part to policy changes in China and the new US administration. While its certainly true that supply has overwhelmed demand recently, leading to a 30% year-over-year drop in module prices, the long term demand projections for solar are excellent, They also continue to be revised upwards, in part due to the increased demand that comes from lower prices. 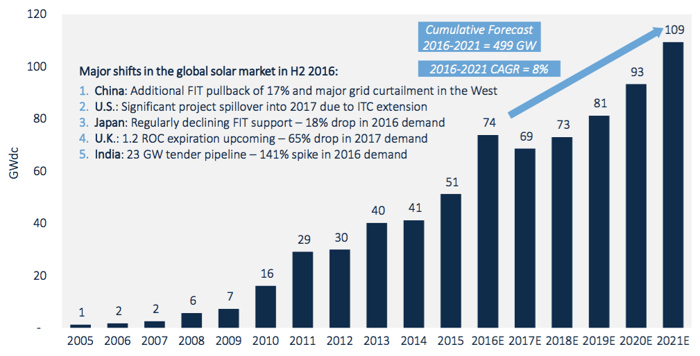 In their Q4 2016 report, GTM's research team projects worldwide demand to drop by about 7% in 2017, but sees annual total installations growing at an average 12% rate over the next 5 years. Expect these projections to be revised upwards over time. The 2021 estimate alone was increased by 4GW since the Q3 2016 report.

While most solar companies have financed their growth via debt, First Solar's long-term leading position in the space has allowed it to more consistently generate a profit. This advantage has allowed the company to build up a massive balance sheet, anchored by a net cash balance of around $1.5 billion (over $14 per share). The company's total equity was over $5.9 billion at the end of the third quarter, worth over $57 per share. This figure will come down because of the asset impairments First Solar is taking, but the resulting amount should still remain over $5 billion, or $50 per share. 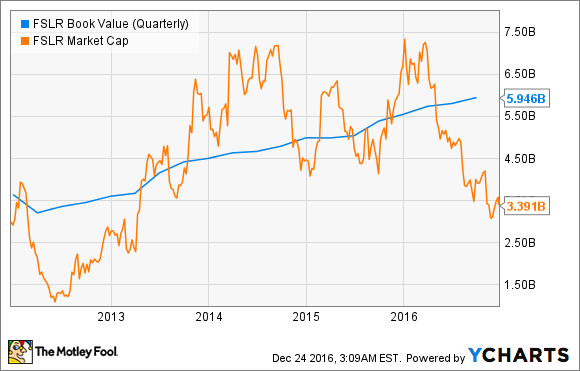 In many cases, the balance sheets of manufacturing companies are loaded with plant, property, and equipment-related assets. These assets can very easily require massive impairments because of obsolescence, which can limit the safety of a low book-to-value ratio. In contrast, most of First Solar's balance sheet resides in cash, investments, and projects under development. These assets have a much lower risk of impairment.

With the current market cap well below the equity book value, investors are either expecting the company to require further large asset impairments in the future or are simply being overly pessimistic. Given the company's leading position in the fast-growing solar industry and their asset composition, this Fool believes that investors will soon realize their error in judgement and buy back in.