Investors looking to the future of power shouldn't ignore uranium just because it has a bad name. Yes, solar and wind will be huge opportunities, but nuclear power will be an important part of the global energy mix, too. And Cameco Corp. (NYSE:CCJ), the largest pure-play uranium miner, is the top stock to invest in if you want to get in on the nuclear energy opportunity.

Cameco isn't the only uranium miner on the planet, but the other options aren't nearly as good. For example, Rio Tinto (NYSE:RIO) produced 3 million pounds of uranium in the first half of 2016, but revenue from this group contributed only around 1% of the company's top line. Uranium is pretty much all that Cameco does.

At the other end of the spectrum is a company like Energy Fuels, a pure play uranium miner like Cameco. But the company has a market cap of a little over $100 million. That's tiny compared with Cameco's $4 billion market cap. On the production side of things, Energy Fuels sold 1.1 million pounds of uranium in 2015 and is expecting to sell around 850,000 pounds in 2016. Cameco sold 32 million pounds in 2015 and is anticipating selling a similar amount in 2016. There's a significant difference in scale here. 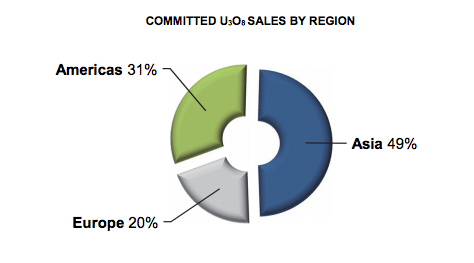 Then there's the issue of reach. Cameco sells uranium around the world, with Asia accounting for roughly half the company's uranium sales last year. Notably, Asia happens to be where most of the nuclear power plant construction is taking place today. China, India, and South Korea account for roughly half of the 58 reactors currently under construction in the world. By contrast, Energy Fuels' strategy is focused on the U.S. market, where no increase in the number of nuclear power plants is expected in the near future.

But Cameco is more than just a large pure-play uranium miner -- it is a profitable one. Uranium prices have been generally falling since 2011. Energy Fuels, for example, hasn't turned a profit in four years and 2016 is shaping up to be another round of bleeding. Cameco has remained profitable on an annual basis throughout the downturn and maintained a $0.40 per-share dividend each year. 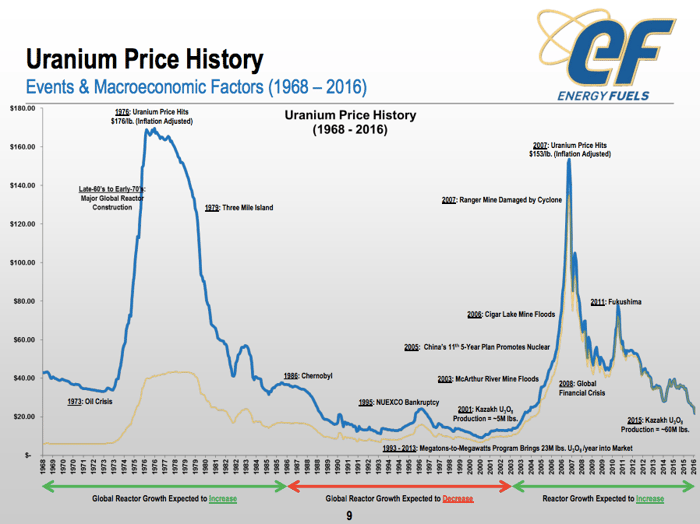 Cameco also has a solid balance sheet backing up its mining business. Long-term debt makes up just about 20% of its capital structure. To be fair, that's slightly higher than Energy Fuels' debt levels, but when you add in the size difference, Cameco still comes out on top.

That said, Cameco has been burning through cash. Through the first nine months of 2016, the company's cash balance fell by nearly 60%. That's clearly not a good thing and suggests that there's at least a little risk to the dividend.

Cameco's share price, though, is near its 10-year lows. And its price-to-book value ratio is 1.05 times. So the stock looks reasonably cheap today. For long-term investors who see a bright future for nuclear power, Cameco easily looks like the top pure-play investment.

The only real option

There are a few ways to invest in uranium, including buying a widely diversified miner like Rio Tinto or betting on a small industry upstart like Energy Fuels. But neither is as good an option as Cameco, which is both a pure play and large enough to offer global exposure to the nuclear power industry. Add in a solid balance sheet, low price, and the nuclear construction taking place today, and Cameco starts to look like a pretty good deal.