After decades of rather consistent growth, Magellan Midstream Partners (NYSE:MMP) seemed to hit the ceiling in 2016: 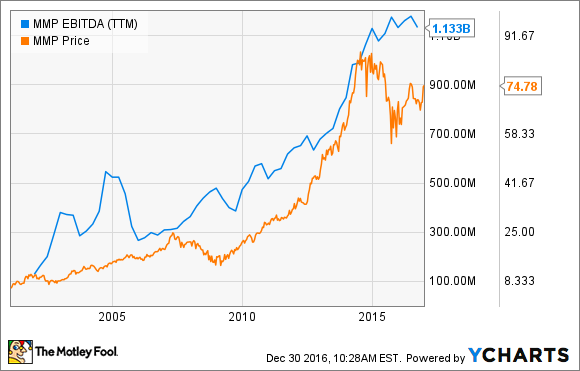 Driving that decline is the company's direct exposure to commodity prices, which were weak in 2016. That said, prices are on the mend, which, when combined with the slew of growth projects Magellan Midstream Partners has in the pipeline, positions the company for a stronger showing in 2017. In fact, it could be the company's best year yet for adjusted EBITDA and distributable cash flow.

The primary culprit causing cash flow to slump is the company's refined products segment, where year-to-date operating margin has declined 7.2%. Driving that decline is the partnership's commodity-related activities, which have been under pressure because of weaker commodity prices in 2016. In addition to that, Magellan's marine storage segment has been under some pressure this year because of part to lower ancillary customer activities.

More fees on the way

This past year would have been a whole lot worse if it weren't for the fact that 85% of Magellan Midstream Partners' operating margin comes from fee-based activities. In fact, one of the company's goals is to increase the percentage of its operating margin that comes from fee-based activates to reduce its direct exposure to commodity prices even further. That's why it has invested $850 million in organic growth projects in 2016, which should supply growing fee-based cash flow in 2017.

In addition to that, Magellan has a $300 million condensate splitter nearing completion. The economics of this project are even better at six times EBITDA on invested capital, or roughly $50 million per year of EBITDA.

The steady fee-based earnings from these and other projects in the pipeline alone could push Magellan's adjusted EBITDA and distributable cash flow to new records in 2016.

In addition to the new fee-based assets going into service in 2017, Magellan should also benefit from an improving commodity price market. OPEC's recent decision to step in and support oil prices should at least stabilize crude oil prices in 2017 -- if not push them higher -- which should cause crude production in the U.S. to rebound. This improving oil market will benefit Magellan's crude oil segment by reversing the lower transportation and storage volumes the company experienced in 2016 due to weaker U.S. oil production resulting from low oil prices.

Likewise, the company's refined products and marine storage segments also stand to benefit from an improving oil market. Not only should Magellan earn higher margins on its commodity-related activities as a result of improving prices, but it should experience stronger demand for services. These improvements should drive a recovery in the operating margin of both segments, which should push distributable cash flow higher in 2017.

Weaker commodity prices marred Magellan Midstream Partners' results in 2016 because its direct exposure to those prices cut into distributable cash flow. However, the company has several large fee-based growth projects nearing completion, and there is growing reason to believe that an improving commodity price market is on tap for the year ahead. These catalysts could push the company's adjusted EBITDA and distributable cash flow to a new record in 2017, making it the company's best year yet.