If you've been invested in stocks since the Great Recession, chances are you've been nicely rewarded, since we've witnessed one of the strongest bull-market runs in history. Unfortunately, with that territory often come more highly valued and potentially overvalued stocks. With that in mind, here are three phenomenal companies that should be on smart investors' shopping lists in case a stock market dip provides a buying opportunity. 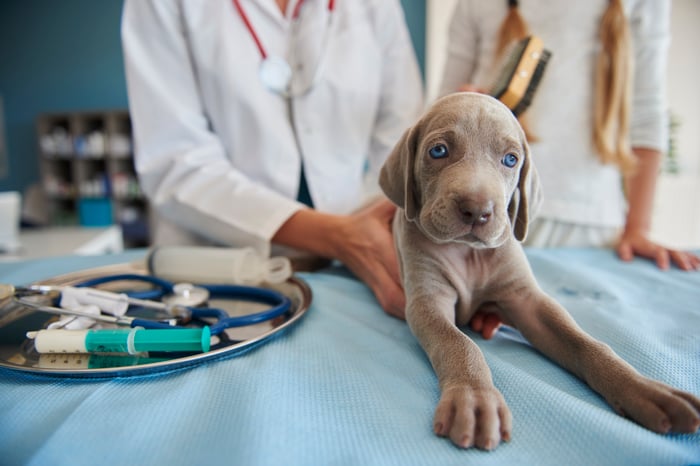 IDEXX Laboratories, Inc. (NASDAQ:IDXX) doesn't operate in the sexiest markets and thus consistently flies under the radar of most investors. The company develops, manufactures, and distributes products and services for small-animal veterinary; livestock, poultry, and dairy health; and water testing.

One of the most impressive metrics from IDEXX Labs is its sustainable recurring revenue. In 2010, 81% of total IDEXX revenue was recurring, and that's only increased in the following years, reaching 87% in 2015. The company's heavy spending on research and development helps fuel innovation, which has helped generate strong return on invested capital -- and has sent its stock price soaring. 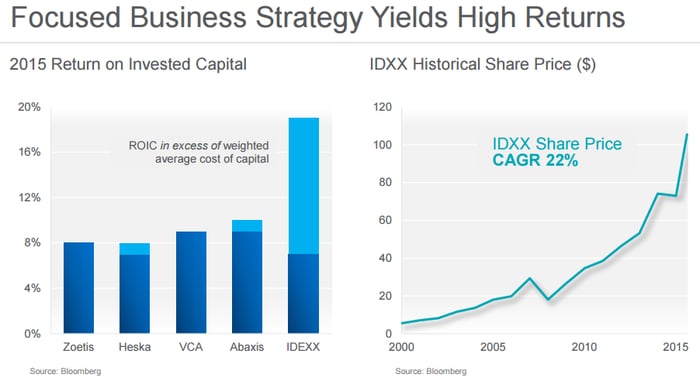 If IDEXX's recent U.S. pet owner survey is any indication, this is a trend that looks set to continue: 61% of millennials (19 to 35 years old) responded that they are willing to make financial trade-offs -- going out for food or entertainment less -- in order to pay for pets' products and services. That compares favorably to the 50% of baby boomers (52  to 70 years old) who responded similarly. The survey also showed that more consumers buy toys for their pets now than a decade ago, and more pets sleep in their owners' beds. These may sound like trivial questions, but the answers show that the bond between human and pet is growing stronger, which bodes well for IDEXX as 85% of last year's revenue came from its companion animal group (CAG) business.

The above figures merely scratch the surface of a boring but promising company. It has multiple avenues for growth, including international business expansion as well as cross-selling products and services. Case in point: The company's new SediVue veterinary instrument, a faster, more consistent and accurate urine analyzer, which is doing well in North America and is launching abroad by year-end, should boost revenue in the years ahead. In fact, in part thanks to SediVue, IDEXX's premium diagnostic instrument placements grew 18% during the third quarter, which helped drive organic revenue 15% higher.

The race toward autonomous vehicles is on, and the list of competitors includes Silicon Valley technology juggernauts, traditional major automakers, and companies in between, such as Mobileye (NYSE:MBLY). Mobileye launched in the late 1990s with the mission to develop vision-safety technology to make roads safer, reduce traffic congestion, and save lives.

The Israel-based company is a leading supplier of software that enables advanced driver assist systems, known as ADAS, and boasts more than 25 automaker partners. It also develops technology to support driverless vehicles through sensing and mapping. A mere glance at its top and bottom lines over the past three years emphasizes just how far its business has come in such a short time. 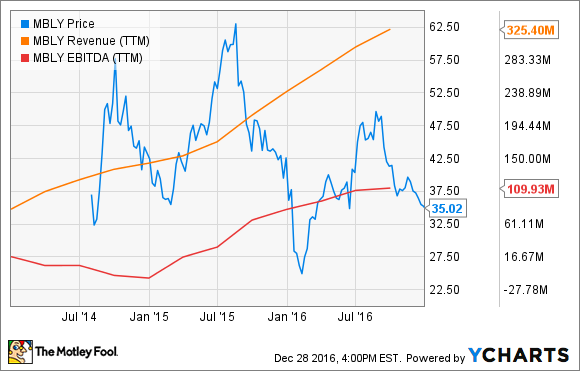 One thing to love about Mobileye is that while it depends on a highly competitive and cyclical automotive industry, its business doesn't require substantial capital investments in equipment or tooling like a traditional auto parts supplier does. Because of that, the company was able to produce a spectacular gross margin of 75% in 2015 with EBITDA margin at 52% and an adjusted return on invested capital above 40%.

There's no question that driverless vehicles can save time, fuel, and, most important, lives. For those reasons, driverless vehicles will become a reality, and if Mobileye can continue to innovate systems and technology to make them better, it stands to hugely reward shareholders down the road.

Ritchie Bros. Auctioneers (NYSE:RBA) dominates as the world's largest auctioneer of industrial and agricultural equipment. It's the in-person, and now online, version of eBay for massive industrial equipment and trucks. The company generates almost all of its revenue from unreserved auctions in which it charges commission to sellers and a fee to buyers, which generally combine to be 11%-12% of the equipment's final sale price, according to Morningstar -- not a bad day's work.

2016 was a busy year for the company, as its stock price jumped roughly 40% and it sold $4.3 billion of equipment, a new annual record, with a 2% increase in gross auction proceeds compared to the prior year. Of that, $2.1 billion of equipment was sold to online buyers, which accounts for about 49% of total sales. Online sales have been a focus of RBA, as it was the next logical step to increasing its number of buyers globally through multiple channels, and they help attract even more global sellers -- a virtuous cycle and network effect, if you will.

Despite RBA already being the market leader, the growth potential through stealing customers from competitors due to its network effect, or simply through the best acquisition options, is massive thanks to the fragmented nature of the auction industry. RBA's $4.3 billion in sales this year pales in comparison to the total estimated global equipment market size of $360 billion, according to RBA's September investor presentation.

Ritchie Bros. is well positioned to accelerate its online strategy with the acquisition of IronPlanet, an online marketplace for used heavy equipment, and continues to return value to shareholders with consistently increasing dividends and reduced share count. It's also positioned atop a highly fragmented industry where it can pick cream-of-the-crop acquisitions to best increase value for the company and shareholders. In other words, it's in quite a good spot for investors if its December price dip continues.