After Tesla Motors (NASDAQ:TSLA) reported fourth-quarter deliveries below its own guidance Tuesday after market close, investors seemed like they couldn't care less about the miss. Indeed, if anything, shareholders might have been happy to see production increasing -- even if the company is underperforming its own ambitious growth targets. Tesla stock was up about 5% in late afternoon trading Wednesday.

So, why is it that investors still seem pleased with Tesla's recent performance, despite the company missing its own targets?

Bad news right? Not necessarily. The narrative looks a bit more optimistic when investors consider that Tesla delivered under 50,700 vehicles in 2015. Its 2016 deliveries, therefore, are up a notable 51% year over year.

In a sense, the market seems to have gotten used to Tesla's habit -- whether it's on purpose or not -- of missing its big growth targets. And it's arguably becoming easier to forgive the company given that it's still growing at a blistering rate.

To put Tesla's small misses into perspective, consider this table of the company's actual annual deliveries versus initial annual guidance for full-year vehicle deliveries during each period.

Data from SEC filings and Tesla's quarterly press releases for vehicle deliveries. *Indicates a figure based on a guidance range midpoint.

Tesla is definitely underperforming its targets, but it's still ramping up deliveries every year at consistently rapid rates.

Production, deliveries, and demand are soaring

Further, several metrics about Tesla's recent growth give investors reason to be hopeful about the company's growth trajectory. Consider some of these tidbits: 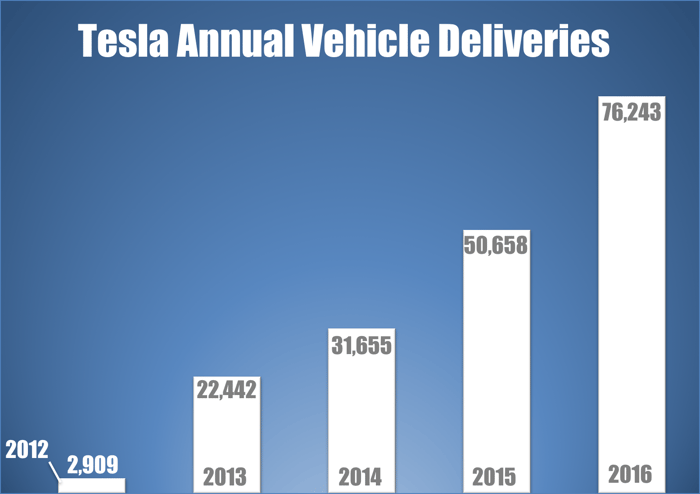 This recent growth, of course, still isn't quite enough to eliminate watchers' well-justified skepticism toward the company's ambitious target of achieving an annualized production rate of 500,000 vehicles in 2018 with the help of the company's planned Model 3 launch later this year. But when considering both Tesla's recent growth and its estimated 400,000 deposit-backed reservations for the lower-cost Model 3, it's definitely beginning to look like the company could build and sell several hundred thousand vehicles in 2018 -- and 500,000 doesn't sound as crazy as it used to.

Tesla Motors Inc.'s Misses Are Habitual, but So Is Its Mind-Boggling Growth @themotleyfool #stocks $TSLA Next Article
Current