For a real estate investment trust that's supposed to be stable and predictable, HCP, Inc. (NYSE:PEAK) had an eventful 2016. HCP's best move in 2016 was turning an unexpected loss into a long-term positive factor by spinning off its riskiest assets, a move that should allow it to get back to doing what it does best. Here's a rundown of this and a couple of other moves by HCP and what to expect going forward.

Healthcare REIT's best move in 2016 was bringing its focus back to senior housing and other stable property types. Image source: Getty Images.

The big move: Spinning off QCP

When HCP released its fourth-quarter 2015 earnings in February, the market was surprised to see an FFO loss -- a rarity for most REITs. The culprit? HCP's portfolio of HCR ManorCare post-acute/skilled-nursing properties. As a result, HCP's stock dropped like a rock. 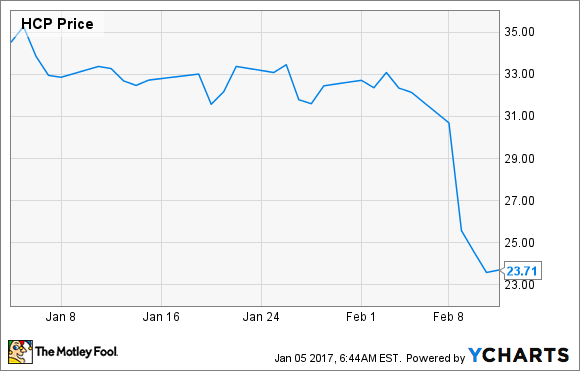 In a nutshell, the post-acute/skilled nursing industry as a whole was facing a challenging environment due to ongoing changes in reimbursement models. Additionally, HCR ManorCare faced its own problems starting in 2015, when the Justice Department accused the company of false Medicare reimbursement claims. During the second half of 2015, HCR ManorCare's fixed-charge coverage dropped to 0.97 times, which means that the company wasn't even earning enough revenue to cover its expenses.

Shortly after, HCP announced plans to make the best out of a tough situation by spinning off the HCR ManorCare portfolio into a newly created REIT called Quality Care Properties (NYSE:QCP), or QCP.

The basic premise is that the spinoff should be a win-win. HCP is left with a portfolio of high-quality, private-pay (not dependent on government reimbursements) healthcare properties as well as a lower debt load, the combination of which should improve the company's credit quality and improve its financial flexibility. And, QCP will have a management team whose only focus is to maximize the value of the post-acute/skilled-nursing facilities, and since the portfolio is now independent of HCP, management has the ability to pursue value-maximizing strategies that were unavailable or impractical while still a part of HCP.

Other smart moves by HCP

In addition to the QCP spinoff, here are two other notable moves by HCP in 2016:

HCP slashed its quarterly dividend to $0.37 from $0.575 in the wake of the spinoff. Although this was the first time HCP reduced its dividend in more than 25 years, it wasn't really a "reduction" at all. Rather, since HCP now has fewer assets in its portfolio to generate income, it has less available to distribute to shareholders. QCP will likely eventually pay a dividend as well, although it decided not to do so for the fourth quarter of 2016 due to a lack of taxable income in the short time period since the spinoff. Besides, a lower, sustainable dividend backed by a financially strong company is better than a higher, uncertain one.

In addition to the spinoff, HCP agreed in November to sell a portfolio of 64 properties that are leased to Brookdale Senior Living for $1.125 billion. HCP expects to close the transaction in the first quarter of 2017 and make a gain of $160 million on the sale. In addition, HCP plans to terminate 25 leases on other Brookdale-leased properties and make some other Brookdale-related changes. This will reduce Brookdale's concentration in the portfolio from 35% to 27%. Improved tenant diversification is a big positive with a large REIT like HCP.

Now that HCP's riskiest assets are out of its portfolio, it can get back to doing what it does best: own and grow a portfolio of low-risk healthcare properties that will produce strong returns and dividend growth for shareholders. I'm expecting a relatively uneventful year from HCP in 2017, especially when compared with 2016, and as a shareholder, that's just fine with me.