The biotech stock rollercoaster known as Stemline Therapeutics Inc (NASDAQ:STML) popped Friday morning with a 21.8% gain, and it was still up about 14.5% as of 11:44 a.m. EST. The market is pleased with an announcement that the company's lead candidate has a shot at an expedited review from the FDA after a meeting with Agency staff. 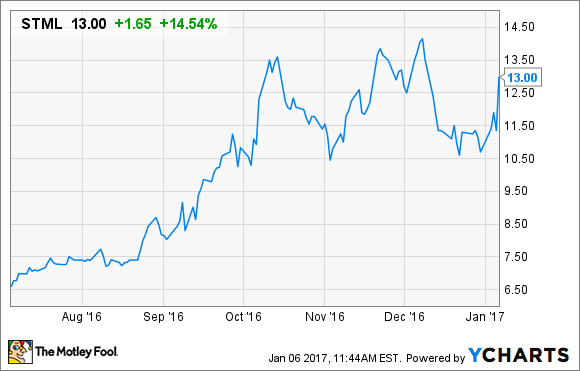 Stemline Therapeutics is wrapping up a fairly small phase 2 trial with its lead candidate, SL-401, for first-line treatment of blastic plasmacytoid dendritic cell neoplasm (BPDCN). It's a rare condition with a dearth of effective treatment options. This is why the FDA previously gave the candidate a breakthrough therapy designation, which allows the company access to top-level Agency staffers to make the application process as smooth as possible.

The stock is popping today because the biotech announced an agreement with the FDA that suggests it will allow the company to file an application for SL-401 based on results from an ongoing phase 2 trial in BPDCN. The company will add an additional eight to 12 untreated patients to the study that set out to enroll about 60 at its outset.

According to Stemline, the additional patients should be enough to support an application for first-line treatment of BPDCN, which the company thinks it can file in the second half of the year. If SL-401 receives the expedited review its breakthrough designation implies, the company could begin recording its first product sales as soon as the first half of 2018.

Unfortunately, the size of the BPCDN population is a bit of a mystery. It's thought to comprise less than 1% of blood based malignancies, but it's often misdiagnosed as a different type of blood cancer. There's a tendency for new treatments of conditions with unmet need to bring patients out of the woodwork, but pinning a peak sales estimate on SL-401 with this indication isn't easy.

As a clinical-stage biotech, the company has very little revenue to speak of, and it burned through about $28.3 million in the first nine months of 2016. With SL-401 in clinical studies for four other indications, plus two more clinical-stage candidates, it will almost certainly need to shore up its cash position in the quarters ahead.

The company finished last September with cash, cash equivalents, and short-term investments totaling about $50.5 million. Preparing an application and assembling a sales team for a commercial launch would increase its cash burn rate, but a lack of long-term debt on its balance sheet suggests the company could issue some debt rather than resort to a value-diluting share offering.