CVS Health Corporation (NYSE:CVS) shareholders have reason to be dismayed. The giant pharmacy services company's stock was pummeled in the second half of 2016. On the other hand, CVS Health's dividend yield is now the highest it's been in years. Will the company raise its dividend yet again in 2017?

The most important prerequisite for CVS Health to raise its dividend is that the company must be able to afford a hike. To determine whether or not this is the case, let's first look at how CVS Health has been financing its dividend payments.

In the first nine months of 2016, CVS Health shelled out over $1.38 billion to pay dividends to shareholders. That wasn't difficult to do: The company made $3.61 billion in earnings during the period. Its net cash flow from operating activities was a whopping $7.95 billion.

But what about going forward? Walgreens (NASDAQ:WBA) managed to take away two huge accounts from CVS Health over the last several months. In August, Prime Therapeutics, the country's fourth-largest pharmacy benefits manager, announced that it was steering its 22 million members to Walgreens -- and away from CVS Health. In September, Tricare announced that Walgreens would be added to the pharmacy network for its 9.4 million beneficiaries and that CVS would be removed from the network.

These wins by Walgreens will certainly impact CVS Health's earnings in 2017 and beyond. CVS Health now forecasts that adjusted earnings per share next year will be roughly the same level as this year's. However, the company should have no problem funding the dividend at current levels or even increasing the dividend -- if it wants to do so.

That leads us to the second prerequisite for a dividend hike: the desire to raise dividends. In light of the weaker earnings picture, does CVS Health want to increase its dividend payment? The answer to that question is clearly "yes." CVS has been committed to annual dividend increases for the past 14 years. Its board of directors recently announced a dividend hike of 18% for 2017. 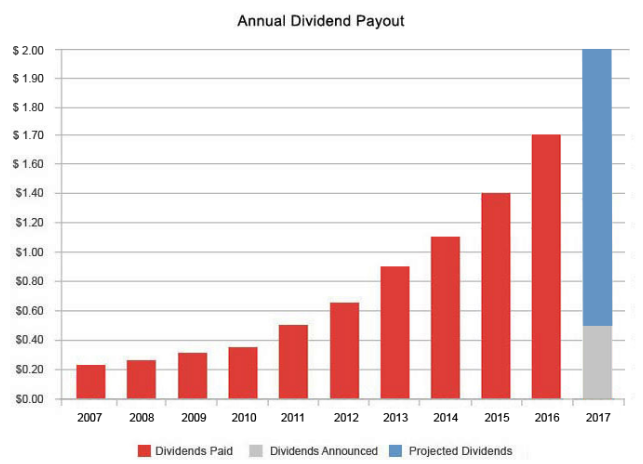 If history repeats itself, CVS Health will up its dividend yet again in late 2017. CFO David Denton said in the third-quarter earnings call that the company will keep on increasing its dividend on an annual basis. That's the good news.

What's the bad news? In his remarks, Denton also noted that the target dividend payout ratio is 35% by 2018. CVS Health's payout ratio currently stands at 34.87%. Denton's comments don't seem to leave much room for any further significant dividend increases as things stand now.

The best news for dividend-seeking CVS Health shareholders, though, is the way things stand now won't be the way they stand a year from now. Time passes, and things change. There are a couple of factors that should position CVS Health to raise its dividend again later this year and still adhere to its target payout ratio of 35%.

The company's 2017 adjusted earnings forecast assumed that $5 billion of stock would be repurchased. However, CVS Health has $18.7 billion authorized for stock buybacks. If the company uses more of that amount, earnings per share will grow, and the payout ratio will decline -- thereby giving CVS Health wiggle room to raise its dividend again later this year.

Another thing to consider is that all of the bad news associated with the losses to Walgreens is already baked into CVS Health's share price. Any positive surprises this year could drive the stock higher.

So back to our initial question: Will CVS Health raise its dividend again in 2017? The company has the money to do so. It has the mindset to do so. Changing dynamics should allow CVS Health room for a dividend hike and still stay close to its target payout ratio. Based on all these factors, I think the odds are quite high that CVS Health shareholders will enjoy yet another dividend increase later this year.