On January 1st, Algonquin Power & Utility Corp. (NYSE:AQN) announced that it had completed their acquisition of the Empire District Electric Company (NYSE: EDE). This is a transformative transaction for Algonquin, as it increases the Canadian utility's size by 50% and more than doubles its total generating capacity. The combined entity will serve over 800,000 customers across the United States, with an asset base of close to $7 billion. What does this mean for investors?

Algonquin is paying $34.00 per share to Empire District shareholders, totaling close to $1.5 billion, in addition to taking on another $850 million in long-term debt, for a total transaction value of about $2.4 billion. The company is financing the acquisition via a $500 million bond issuance, along with 1.15 billion Canadian dollars worth of convertible bonds. Empire District allows Algonquin to significantly expand and diversify its generating and distribution assets in the central United States. The company has also shown steadily growing cash from operations over the past 10 years, which will be a welcome addition to Algonquin's already fast-growing results. 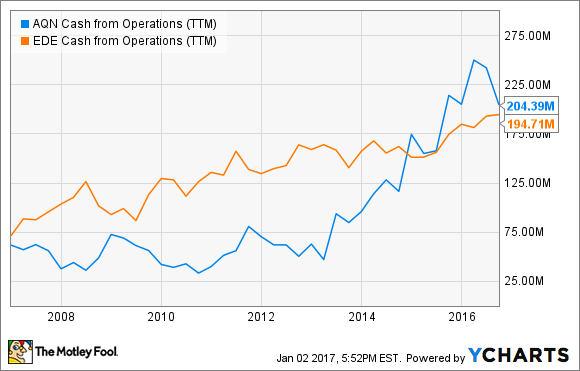 AQN and EDE Cash from Operations (TTM) data by YCharts.

Empire as a vehicle for significant further investment

One of the main reasons Algonquin purchased Empire District is because of the significant potential for new investments over the next five years. As a utility with a large regulated asset base, Empire District can generate close to guaranteed returns on its investments so long as the public utility commissions approve its proposed capital expenditures. Overall, the transaction increases the percentage of Algonquin's EBITDA that is regulated from 51% to 72%, which will help improve the company's credit risk profile.

As a comparison, the company's existing coal plants currently have operating costs of $30 to $40 per MWh (megawatt hour), while the full cost of new wind capacity is only $25 to $30 per MWh. While the wind cost does include existing government tax credits, it would still be much cheaper than any investments into new coal plants when the existing ones are ready to be retired. 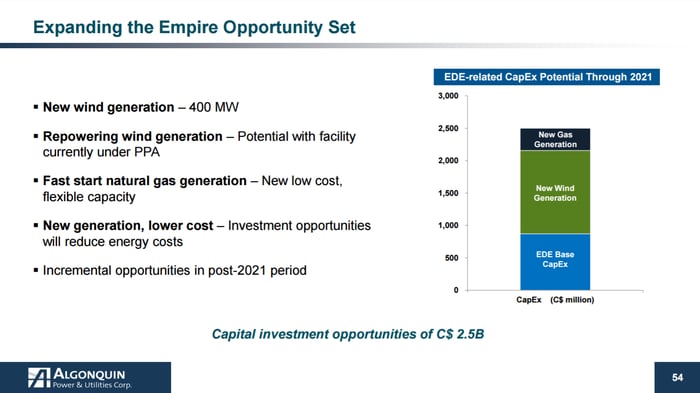 Algonquin is thus planning close to $2 billion in new investments in Empire-related generation facilities over the next five years, investments that are expected to actually reduce the subsidiary's energy generation costs. This is expected to boost Empire District's return on equity from the current rate of 7.4% up to the 9%-10% range by 2021.

There are, of course, risks with every investment, even utilities -- the stocks that are typically prescribed for widows and orphans. One of the bigger risks for utilities is rising interest rates, as it makes financing their large capital expenditures more expensive, and their dividend yields less attractive to investors. Rising rates here in the United States have already caused the utility index to drop as much as 13% from its mid-summer highs. Algonquin has followed the index closely in this regard. However, the regulated returns from Algonquin's investments in Empire District and in other parts of the company are expected to help Algonquin to increase its already generous 5% dividend at a 10% annual rate over the next five years. Bottom line: this makes the company look more attractive than most utilities to this Fool.