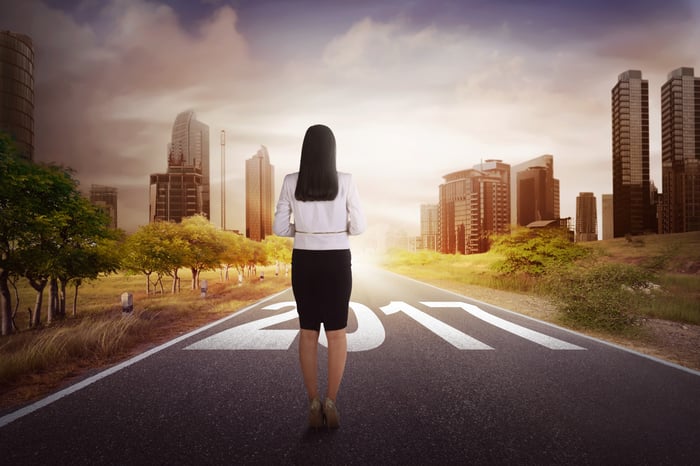 From celebrity deaths to shocking political news, people found plenty to complain about in 2016. Me, though? I actually had a really good year. I met some incredible people, had unbelievable adventures, and learned a ton.

In the financial realm, I saved responsibly (even given the crazy-high D.C. cost of living) and added quality companies to my stock portfolio. Indeed, I'd say I pretty fully met my 2016 resolution to diversify. My next challenge -- and my resolution for 2017 -- is to take a smarter approach to finding stocks to buy by creating a watchlist.

A look in the rearview mirror

Going into 2016, my portfolio was overweight in healthcare and largely packed with higher-risk growth stocks. I resolved to achieve more balance by finding stocks outside of healthcare and established, dividend-paying stocks.

Overall, I think I did pretty well. Over the course of the year, in addition to adding to prior holdings, I opened positions in the following stocks:

I'd give myself a B rating for following my 2016 resolution. I did diversify pretty nicely, but I'm still missing exposure to financials -- particularly since I talked a big game this time last year about getting exposure to this industry. While I did purchase Wells Fargo, I never found a replacement financials stock after I sold off my position.

As I write this, healthcare is still the sector with the most representation in my holdings -- but it was narrowly trailed by consumer goods until two late-year healthcare pops reinflated that section of my portfolio. In any case, with the exception of the gaping hole of financials, the various sectors are much more evenly represented than they were going into the year. And in hindsight, this resolution was pretty wise, as my non-healthcare buys buffered the stinging biotech losses I suffered in 2016. (The broader industry, as measured by the iShares Nasdaq Biotechnology ETF (NASDAQ: IBB), sank 19%.)

My resolution for the year ahead

Looking ahead to 2017, there's still more work for me to do before I feel adequately diversified. I need to up my game in energy and industrials, and, of course, re-enter the financials space. This year, though, my resolution goes a step beyond just buying in: I'm going to resolve to be more analytical about when I buy. Specifically, I'm going to make a watchlist.

In the past, my buying went something like this:

I'd like to improve upon this process by forcing myself to be patient. I want to do my research ahead of time and come up with a list of companies that I like, along with the prices at which I'd buy in.

Now, let me be very clear that I'm in no way using this list to try and time the market. I simply think I should have my research already done on a sizable list of intriguing companies before a buying opportunity presents itself.

In particular, I'm looking to fill this list out with blue-chip Fool favorites like Coca-Cola, Procter and Gamble, General Motors, Chevron, Verizon Communications, and Microsoft. I know relatively little about the inner workings of these businesses, but I owe it to myself to do some research and figure out what I think is an attractive price for each of them. While I'm at it, I'm going to summarize my buy thesis for each, as well as some areas to watch.

This organized, systematic approach takes some of the emotion out of investing, which is a huge advantage. When a stock hits my target price, and assuming nothing has changed about the business, I'll know I want to pick up shares for great reasons, rather than being temporarily excited about a company I just researched.

Who knows what 2017 will bring, but I feel confident that building a watchlist will be the best financial move I can make.