Back in November, several department stores issued better-than-feared earnings reports for the third quarter. This led to big gains for most department store stocks over the next few weeks.

However, investors started to sour on the sector in December as reports of weak holiday sales and mall traffic started to circulate. As a result, shares of Macy's (NYSE:M), J.C. Penney (OTC:JCPN.Q), and Dillard's (NYSE:DDS) all fell by double digits last month, according to data from S&P Global Market Intelligence. Macy's stock fell by 15% during December, while shares of J.C. Penney and Dillard's each sank 12%. 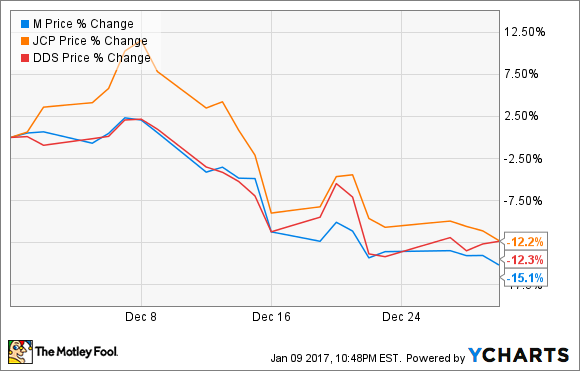 The steep declines in department store stocks began during the week of Dec. 12. On Wednesday of that week, the U.S. Commerce Department reported fairly disappointing retail sales data for November.

The downtrend accelerated on Dec. 16, when analysts at JPMorgan Chase downgraded Nordstrom (NYSE:JWN) stock. By the end of the month, Macy's, J.C. Penney, and Dillard's had given up essentially all of their gains from November.

It's unusual for an analyst downgrade of one stock to impact a whole sector so dramatically. However, the JPMorgan analysts cited Nordstrom's management as saying that traffic trends at the company's full-line stores were at the worst levels since 1972.

Mall traffic has been declining for several years. Image source: The Motley Fool.

This comment shows just how much e-commerce is disrupting mall-based retailers. After all, the U.S. economy is growing at a reasonable clip. Macy's, J.C. Penney, and Dillard's have far more stores in underperforming malls than Nordstrom, so if Nordstrom is hurting, they are probably facing even bigger headwinds.

Late in December, several news outlets reported that holiday spending had picked up in the week before Christmas after a slow start to the month. However, that wasn't enough to reinvigorate department store stocks.

With 20-20 hindsight, department store investors' November euphoria appears to have been misguided. In the first week of January, Macy's and J.C. Penney both reported disappointing sales results for the holiday season. For the combined November-December period, comp sales fell 2.1% at Macy's and 0.8% at J.C. Penney. Kohl's and Sears Holdings have also reported weak holiday season sales results in the past week.

Dillard's, which is notoriously tight-lipped, hasn't issued a holiday sales release. However, given that it has had an even worse sales trajectory than Macy's and J.C. Penney for the past couple of quarters, its prospects don't look bright.

J.C. Penney has managed to maintain its annual earnings guidance, presumably due to strong cost control. However, Macy's was forced to slash its full-year earnings forecast, even though it only missed its sales target by a small amount.

Looking ahead, Macy's plans to close up to 100 stores in order to proactively address changing shopping trends. The company's established e-commerce business may allow it to remain successful even if it must significantly shrink its store network in the coming years.

Macy's will close up to 15% of its stores to cut costs. Image source: The Motley Fool.

J.C. Penney has been more resistant to closing stores. Management believes that having a robust store network is critical to building up the company's e-commerce business. Furthermore, J.C. Penney hopes to capitalize on store closures at Macy's and Sears by stealing those competitors' customers.

As for Dillard's, the outlook is murkier. Since the Great Recession, Dillard's secret to success has been holding down costs, inventory, and capital spending. Unlike Macy's and J.C. Penney, it has spent very little money on renovating stores or building a robust e-commerce operation.

This approach has allowed Dillard's to return huge sums of cash to shareholders. If the company can stabilize its sales soon, its tight-fisted approach to spending will allow it to continue buying back lots of stock. However, Dillard's may not have the tools necessary to fix its sales performance -- in which case there could be more pain ahead for shareholders.