You'd hardly be able to find a pure play on agricultural equipment today. Titan Machinery Inc. (NASDAQ:TITN) doesn't fit the bill -- it sells agricultural as well as construction equipment. But unlike Deere & Company (NYSE:DE) and CNH Industrial (NYSE:CNHI), which manufacture machines, Titan is an intermediary that sells these companies' equipment and parts through its dealership network of retail stores. You might even call Titan a CNH dealer, considering that nearly 70% of the agricultural and 67% of the construction machinery it sold in 2015 belonged to CNH. Given Titan's dependency on these equipment manufacturers, you'd expect their stocks to have moved in tandem in 2016. However, that wasn't really the case. 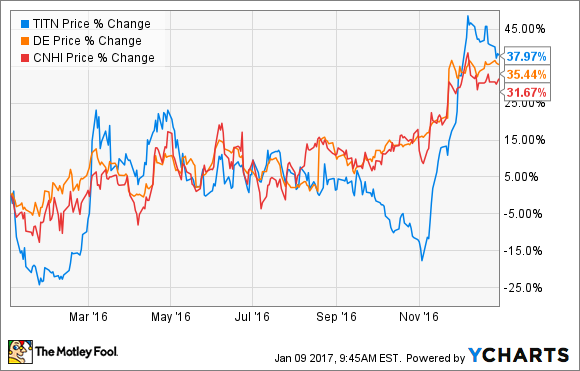 Titan ended 2016 on a solid note, even outperforming its primary supplier. But what's striking about that chart is the big drop in Titan's shares in the month of October, after which it dramatically reversed course. That compels investors to wonder whether Titan has any room to run higher in 2017 or whether the stock has gotten ahead of itself. Let's dig a little deeper.

2016 was a challenging year for agricultural companies as weak crop prices hit farm income and demand for equipment. As Titan struggled with high inventory and low sales, its revenue slipped10% to $0.9 billion for the nine months through Oct. 31, 2016. There was no surprise element there, as just weeks prior, CNH had reported 9% and 11% drops in its revenue from agricultural and construction equipment, respectively, for the nine months through September.

What the market didn't see coming, though, was the twofold jump in Titan's net losses to $6.3 million during the nine-month period. Part of it had to do with Titan's focus on selling used equipment, which carries lower margins than new equipment, in a bid to ease inventory. 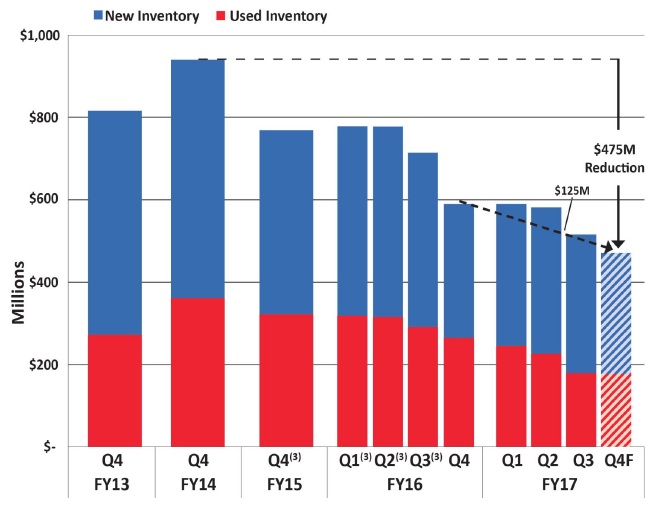 Inventory reduction has a twofold advantage for Titan. First, it lowers the company's interest expenses on the floor-plan financing that it receives from CNH to facilitate equipment purchases. Titan's floor-plan interest came down to $10.8 million during the nine-month period from roughly $14 million in the year-ago period. Second, it boosts Titan's cash flows, as equipment sales indicate inflow of cash, which explains why Titan is free-cash-flow positive despite the losses. That said, the chart shows that Titan still has a lot of inventory to work through, and there's little to suggest improved demand in 2017.

The biggest challenge facing Titan in 2017

Deere foresees another challenging year ahead for agricultural companies, as it projects 2016 U.S. farm cash receipts to be substantially below last year's and expects the trend to continue into 2017. Accordingly, Deere expects industry sales for agricultural equipment in the U.S. and Canada to decline 5%-10% this year. Titan CEO David Meyer backed Deere's projections during the company's latest earnings call. Meanwhile, global construction markets aren't looking too hot, either.

That leaves Titan with only one option to save its margins this year: cost-cutting. However, the company cannot make any changes in its business structure via mergers, restructuring, or sale of assets without CNH's consent, as per the agreement between the two companies. No matter which way you look at it, this stipulation is a major hurdle to Titan's growth and also one of its key risk factors. Moreover, Titan could feel the pinch if persistent weakness in end markets compels CNH to restructure its operations. I believe this tight dependency on CNH is the biggest reason investors should be wary of investing in Titan.

Titan stock could give back its gains in coming months

The inherent risks in Titan's business model might explain why analysts expect its earnings to grow about 10% in the next five years versus 18%-20% growth in Deere's and CNH's earnings. Let me also warn you that Titan has a terrible history of missing Street earnings estimates.

Titan expects to report a 13%-18% decline in agriculture same-store sales for fiscal 2017 (the year ended Jan. 31, 2017) and equipment margins between 6.2% and 6.8%. That's a substantial downgrade from management's projection of 7.7% to 8.3% margins at the beginning of the fiscal year. Investors might want to take Titan's upcoming fiscal 2018 projections with a grain of salt -- and even pass up this loss-making, non-dividend-paying agricultural-equipment stock for better options.