Shares of Texas Roadhouse Inc. (NASDAQ:TXRH) soared last year, climbing 35% according to data from S&P Global Market Intelligence as the steakhouse chain continued to outperform the broader restaurant industry. As the chart below shows, the stock jumped on a strong earnings report in February, and later, after pulling back significantly in the second half, jumped again following the election of Donald Trump. 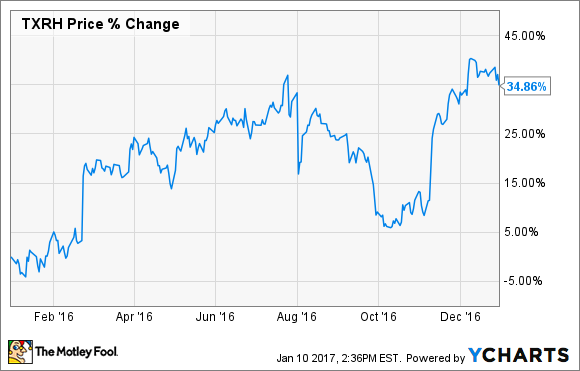 The steakhouse chain pulled off another strong performance; its stock has gained every year since 2011. Through the first three quarters of 2016, same-store sales were up 4.2% at company-operated restaurants and 3.9% at franchised locations, a marked contrast from a number of other chains that complained about a restaurant recession and declining traffic during the year.

Texas Roadhouse also benefited from a drop in beef prices; the company expects to report total food cost deflation of 3.5% for the full year. That helped it achieve an 11% increase in revenue through the first three quarters, and a 28% jump in earnings per share.

Towards the end of the year, the stock rallied following the election: Restaurant stocks, in general, gained as many expect a Trump administration to have labor regulations more favorable to business. Since the election, a judge struck down an Obama administration regulation that made more workers eligible for overtime pay, and Trump and the Republicans in Congress are expected to keep the federal minimum wage at $7.25, although several states raised theirs at the new year. Trump also named Andy Puzder, the CEO of Carl's Jr./Hardee's, as his Secretary of Labor. Puzder has repeatedly called for looser regulations on restaurants.

Looking ahead to 2017, management forecast that comparable-sales growth would continue, but said labor-cost inflation would rise by the mid-single digits, though that could change with a Trump administration on its way into office. The company also will continue its steady pace of restaurant openings, with plans for 30 new Texas Roadhouse locations, and seven or eight new locations for Bubba 33, its pizza-and-burger chain.

With its popular concepts and a business-friendly administration coming into power in Washington, I would expect the stock to continue to outperform.