High dividends are nice, but high dividends that are safe and have the potential to grow are the holy grail of dividend investing. When this type of dividend stock goes on sale, it's even better. With the poor performance of the real estate sector in 2016, there are good opportunities to get some of these excellent long-term dividend plays at a discount. Here are two great examples you could buy right now.

Retail can be a good defensive play

Retail is not often thought of as a defensive investment, and with some high-profile retail bankruptcies in recent years, it's easy to understand why. However, the real estate side of retail can be a safe investment, especially if you choose a REIT like Kimco Realty (NYSE:KIM), which currently pays a 4.2% dividend yield.

The lease structure of retail is rather defensive. In Kimco's case, the tenants are on long-term leases (with initial terms of more than 10 years), which means that the income stream is mostly secure in recessions. Only about 8% of leases expire each year, which keeps turnover and vacancy risk to a minimum. And the supply-demand dynamics of shopping center retail are favorable for strong occupancy, as new supply is at a historic low and demand for new retail stores is rising.

Finally, many of Kimco's tenants are in defensive retail businesses. For example, major tenants such as TJX Companies, Wal-Mart, and Dollar Tree actually tend to do better during tough economic times. Others, such as Whole Foods, are resistant to competition from online-based retailers, which has been a big reason for many of the retail bankruptcies of recent years.

Not only does Kimco pay a rather high dividend, which it has raised at an 8% annualized rate so far this decade, but the company has produced some impressive share-price gains as well. In fact, the company has generated 13.4% average total returns since its 1991 IPO. To put this in perspective, a $10,000 investment in Kimco's IPO would be worth more than $260,000 today. While there's no guarantee of this performance replicating itself over the next 26 years, the potential is certainly there.

One stock that looks particularly appealing in the healthcare real estate space right now is Medical Properties Trust (NYSE:MPW), especially because of its 7.3% dividend yield. The REIT, which invest in hospital properties, trades at a rock-bottom valuation of just nine times its 2017 FFO (funds from operations) guidance. While there are some reasons for this, which I'll discuss in a bit, it's still a relatively safe investment and too cheap to ignore.

I've highlighted the reasons for investing in healthcare real estate before, but here are some of the biggest ones. First, it's an inherently defensive type of property. Not only do tenants sign long-term leases, but healthcare is one expense people can't cut back on during a recession. Second, the market is growing. Healthcare spending is projected to rise, and the senior citizen population in the U.S. is expected to roughly double by 2050. Finally, the industry is highly fragmented and in the early stages of REIT consolidation, which means that there is ample opportunity to grow in the existing supply.

It appears Medical Properties Trust is completely willing to take advantage of opportunities as they arise. During 2016 the company completed about $1.75 billion worth of acquisitions, a record-setting figure. And comments from the CEO from the third quarter of 2016 indicate that the company has no intentions of slowing down as it heads into 2017.

One of the major risk factors is that most of the revenue of Medical Properties Trust's tenants comes from reimbursement programs (Medicare, Medicaid, and private health insurance), as opposed to private-pay sources, which are generally more stable and predictable. Also, one of the company's major tenants (Adeptus Health) has been struggling financially, which has been a significant cause of concern for investors.

Despite the risks, I feel that Medical Properties Trust is an extremely compelling dividend stock at its current low valuation. The company's projected normalized 2017 FFO of $1.35 to $1.40 per share is more than enough to cover the $0.92 annual dividend, and actually works out to a relatively low payout ratio for a REIT.

One of the most important points I want to stress is that these stocks are good investment choices only if you have a long time frame to ride out any ups and downs. As you can see, both companies experienced share-price drops of 17% or more in 2016: 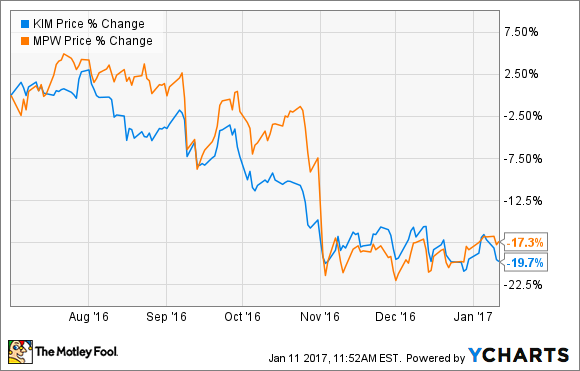 This was mainly due to rising interest rates, and not problems with the businesses themselves. However, if interest rates continue to climb faster than the market expects, there could easily be further losses ahead. Nevertheless, over long periods of time, these companies have winning business models and could produce strong gains for your portfolio.