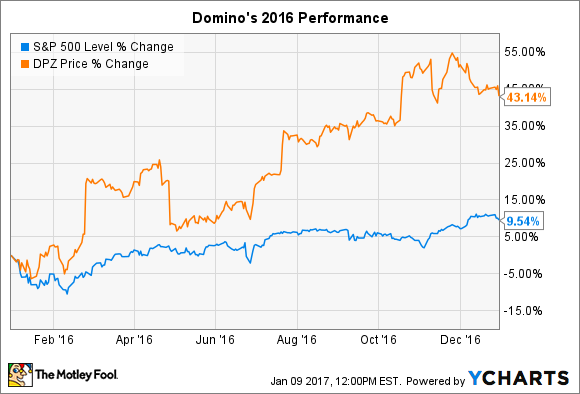 The rally contributed to massive growth for long-term shareholders, who have seen their stock double over the past three years and spike by nearly 400% since 2012 -- a time during which the broader market rose by just 78%.

Domino's 2016 operating results trounced other fast-food chains and also left rival Papa John's (NASDAQ:PZZA) far behind. Comparable-store sales rose by 6% in the first quarter, by 10% in the second quarter, and by 13% in the third quarter of the year. Papa John's, meanwhile, has seen its growth pace improve from flat, to 5%, to 6% in its most recent quarter, which adds up to a significant sales gap. 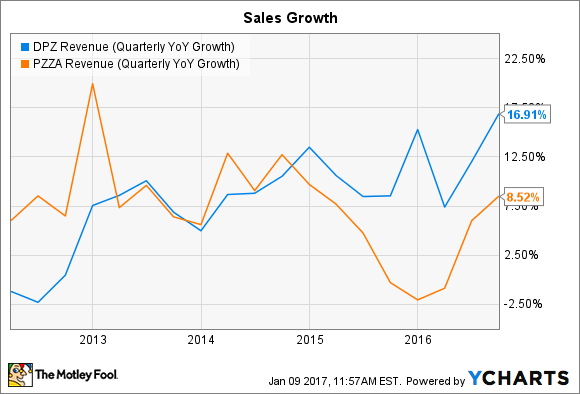 Domino's remains far more profitable than its smaller rival, too. Operating margin clocks in at 18% over the past 12 months, or double Papa John's result. The gap isn't quite as large when you drill down to the bottom line, but Domino's is again in the lead with net margin of almost 9%, compared with 6% for its competitor.

A big question going forward is just how deep of a moat is protecting Domino's business. It might just be a matter of time, for example, before menu tweaks allow rivals to steal back their lost market share. Another key risk is the company's elevated debt level, given that interest payments ate up a brutal 4.5% of sales last quarter. Yet Domino's stock should march higher in 2017 if the pizza chain continues boosting its sales footprint and earnings at a market-thumping pace.