The energy industry is a global colossus in the overall economy, and oil giant and Dow component Chevron (NYSE:CVX) plays a key role in delivering oil and natural gas to the world. The integrated oil company combines exploration and production, pipeline and transmission, and refinery and marketing assets under a single corporate umbrella, and investors have seen good share price performance as well as healthy dividends that put Chevron's yield among the highest in the Dow.

Yet one thing investors haven't seen from Chevron lately is a stock split, and some are getting impatient as the stock has climbed back into triple digits. Below, we'll look more closely at the history of Chevron stock splits to see whether the oil company is likely to make a move in 2017. 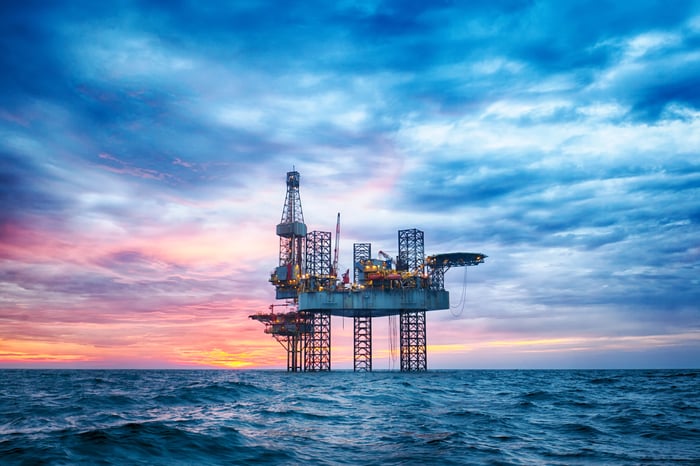 Chevron stock splits in the past

Here are the dates and split ratios for the stock splits that Chevron has done in the past:

As you can see, Chevron has done stock splits when the company decided it was appropriate. With average annual returns of nearly 12% over the past 45 years, investors have been pleased with Chevron's long-term performance.

Chevron's stock split history points to past practices that were fairly common not only in the energy industry but across the stock market. In the run-up to its 1973 split, the stock climbed as high as $90 per share, motivating the oil company to do its first split in 17 years. After a long period of stagnant industry conditions, the oil boom in the late 1970s and early 1980s sent Chevron's share price as high as $117, and shortly thereafter, a split took Chevron's stock back below the $50 per share mark.

After Chevron's 1981 split, oil prices plunged, and that kept further splits unnecessary for a long time. It wasn't until 1994 that Chevron stock again climbed into the $90s, and the ensuing split continued the oil company's routine.

Interestingly, though, Chevron hasn't always taken every opportunity to do a split. In 1999, the stock price briefly climbed into triple digits, topping out at $105 per share. Yet Chevron didn't do a split at that point, and the ensuing bear market in stocks took care of the high stock price naturally. Only in 2004, when the stock again vaulted above $100, did Chevron pull the trigger one final time.

Why Chevron didn't do a stock split recently

Over the past 13 years, Chevron has exercised restraint in a way that has proven justified. In early 2008, the latest oil boom helped send Chevron shares to nearly $105, but the ensuing financial crisis posed a major setback for the company. It took until 2011 for the stock to regain triple-digit levels.

Yet from 2011 to 2014, Chevron quite consistently traded in the $110-$135-per-share range without doing a stock split. That seemed to signal a change in thinking. Even after 2015's oil price plunge sent the stock as low as $75 per share, Chevron managed to hold its own, and the subsequent recovery once again has put Chevron at a level at which the company would typically have done a stock split in the past.

Will Chevron do a split soon?

For its part, Chevron hasn't been outspoken on the question of whether it will split its stock in the future. Its quarterly conference calls haven't mentioned the issue, and Chevron's larger rival in the industry hasn't made any hints of doing a stock split, either.

That's not terribly surprising, given the changing attitude toward splits and share prices. Now, investors don't balk at all at a stock that costs more than $100 per share. Indeed, some companies seem to see high stock prices as a sign of fundamental success.

Chevron investors shouldn't expect a stock split to come in the near future. If a big jump in oil prices were to deliver extremely strong stock returns, then it's possible that share price gains above the all-time high near $135 could eventually spur a reaction. Regardless, long-term investors have to be happy with the profits that Chevron has produced for them over the years.