Royal Gold, Inc. (NASDAQ:RGLD) is a precious metals company, but it isn't a traditional miner like Newmont Mining Corp (NYSE:NEM) or Freeport-McMoRan Inc (NYSE:FCX). Investors looking at the gold and silver space should take the time to analyze what that means because it changes the risk equation. In the end, Royal Gold isn't risk free, but it may not be as risky as your typical 'gold' stock.

A miner like Newmont digs holes in the ground, pulls out gold, and sells it. Royal Gold doesn't do that. It provides cash up front to miners for the right to buy a portion of the future gold and silver production from a mine at reduced rates. For example, in mid-2015 Royal Gold provided $610 million to Barrick Gold (NYSE:GOLD) in support of the company's Pueblo Viejo mine. In return, Royal Gold got the right to buy gold and silver at 30% of the spot price up until a certain threshold and then at 60% of the spot price.

Royal Gold likes this because it builds in low costs. Miners are fond of such agreements, known as streaming deals, because they allow miners to avoid issuing stock, selling debt, or going to a bank. Sometimes those sources of funding can be extremely expensive, for example during deep industry downturns (like 2015). Royal Gold's role as a streaming company changes the traditional precious metals model in a big way.

For example, you've already seen that Royal Gold locks in low costs for the silver and gold it buys. But the bigger issue for investors is the other side of the equation. Miners like Newmont and Barrick have been working hard to cut costs lately. Newmont, for example, has trimmed its all-in sustaining costs from $1,170 an ounce for gold to an expected $870 to $930 an ounce in 2016. It's impressive cost cutting, but it also means that Newmont may have let costs get a little out of hand during the salad days. Royal Gold's business model effectively stops that from happening.

Then there's the difference on the balance sheet. Freeport's long-term debt made up around 80% of its capital structure at the end of the third quarter. To be fair, there's extenuating circumstance here, most notably an ill-timed and large investment in the oil space. And it's working hard to trim that heavy load to more manageable levels. However, Royal Gold's approach is to cut a streaming deal with short-term debt and then to issue stock to permanently finance that spending. Royal Gold has no long-term debt at all.

And then there's the counter cyclical aspect to Royal Gold's business. When other precious metals miners were pulling in their horns because of low gold and silver prices, Royal Gold was growing its business. Barrick Gold is a perfect example. It's been cutting costs by focusing on its best assets, which has lowered production from 7.2 million ounces in 2013 to an expected 5 million to 5.5 million ounces in 2016. Royal Gold, by contrast, reported record gold equivalent volumes in fiscal year 2016, up by more than 35% over 2015. That's largely because of it's ability to step in with funding when banks and investment markets won't (or because miners see such financing costs as prohibitive). 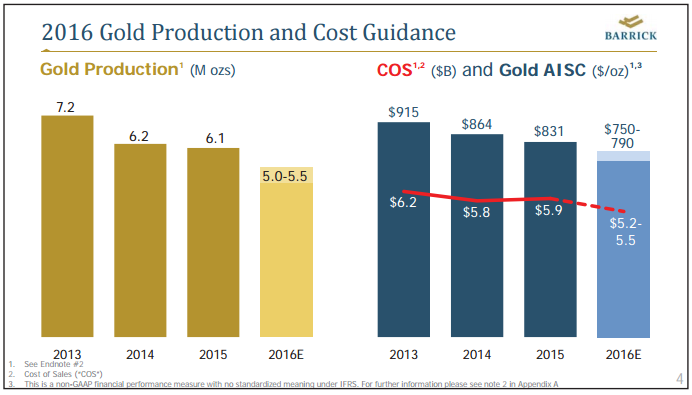 None of this is to suggest that Royal Gold is risk free. It can invest in a mine that never gets built, a mine stoppage would stop its "stream" of gold and silver, and precious metals prices will have a big impact on its top and bottom lines. But, compared to traditional miners, Royal Gold is a lot less risky because low costs are built into the business model, long-term debt is avoided, and it can actually benefit when miners are suffering. If you are looking for a precious metals investment, Royal Gold should be on your short list.