The shale driller got back on its feet last year thanks to an emerging shale play in Oklahoma, which will be a key to its future success.

In many ways, 2016 was a bounce-back year for Continental Resources ( CLR -1.98% ). The Bakken shale driller overcame some missteps, made early in the downturn, to get back on solid financial footing. Those improvements, combined with rising oil prices and strong well results from an emerging growth play, catapulted the company's stock: 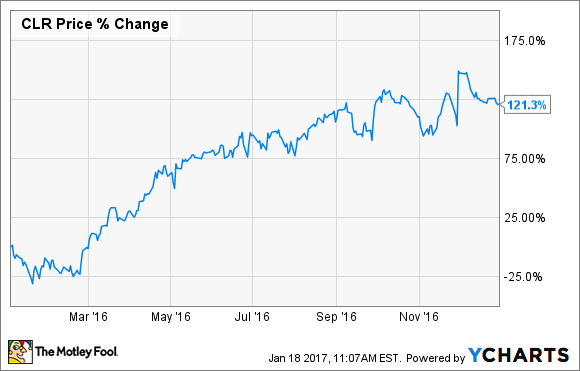 Thanks to those gains, Continental Resources' stock ended the year just 36% below its all-time high, which it set right before oil prices started crumbling in 2014. While a return of triple-digit oil is unlikely for quite some time, Continental Resources does not need oil that high to thrive in the future, thanks to its improving drilling results. Because of this, there could be more upside still left in this stock, as long as crude prices don't take another dive.

Like many of its peers, Continental Resources entered 2016 in a tight spot. Because of that, the company set its capital expenditures budget 66% below 2015's level, to $920 million, which it thought would roughly match cash flow at $37-a-barrel oil. That spending level, however, would not be enough to maintain its production rate, which it initially expected to decline from an average of 221,700 barrels of oil equivalent per day (BOE/D) in 2015 to roughly 200,000 BOE/D in 2016.

That said, Continental Resources outperformed those expectations due to stronger well results, falling costs, and rising oil prices. Well results in the emerging STACK play of Oklahoma were particularly strong. In May the company announced a record STACK oil well, which flowed at an initial test rate of 3,339 BOE/D. Then in October, it broke that record after a well tested at 4,642 BOE/D. The STACK's robust well results caused drillers to spend billions of dollars locking up additional acreage in the area last year. For example, Newfield Exploration ( NFX ) paid $470 million to buy 42,000 acres, while Marathon Oil ( MRO -1.86% ) spent $888 million on 61,000 acres. Those transactions helped shine a light on the value-creation potential of Continental's extensive acreage position.

Thanks to its robust STACK results and rising oil prices, Continental Resources increased its capex budget to $1.1 billion during the third quarter, which was enough capital to push production up to between 215,000 BOE/D and 220,000 BOE/D. Further, the company anticipated that even at that increased spending level it would generate excess cash flow for debt reduction. Controlling a position in the emerging STACK play proved to be a key driver behind producers' ability to boost spending and production guidance. Newfield Exploration, for example, was also able to increase its budget, which went from $650 million to $750 million and fueled production that ended the year 7% above the initial forecast.

Continental Resources' other main highlight last year was an improving balance sheet. Aside from generating free cash flow, the company sold three non-strategic assets last year, bringing in more than $600 million. It used this money to call for the early redemption of its 2020 and 2021 notes, paying $600 million to redeem this debt, which reduced total debt outstanding from $7.2 billion at the end of June to $6.6 billion by early October. That improving financial position helped lift a weight that had been holding the company's stock down.

What could drive the stock higher in 2017

While Continental Resources has yet to put out 2017 production guidance, it appears to be in a position to return to growth mode this year. The company ended last year with 205 drilled uncompleted wells (DUCs), which it can complete for an additional $3 million to $3.5 million per well. Those wells represent substantial production potential, considering that the company completed just 119 wells last year. In addition to its DUC inventory, Continental should have the financial capacity to drill and complete additional wells this year, putting it on pace to deliver increasing production.

That said, for the stock to continue rising in 2017, Continental needs to release a clear growth plan that rivals those of its peers. For example, Marathon Oil sees production from its North American resource plays increasing by a 15% to 20% compound annual rate over the next five years, while spending within cash flow at $55 oil. That is healthy growth for a company that produced 216,000 BOE/D from North America last quarter. Meanwhile, shale leader EOG Resources ( EOG -0.66% ) sees its U.S. oil output rising by a 15% to 25% compound annual growth rate through 2020, while living within cash flow at $50 and $60 oil, respectively. For EOG Resources, that growth is off an even larger base of 275,700 BOE/D last quarter. Given these rival projections, investors will want to see Continental keep pace, so it does not fall any further behind.

Continental Resources enjoyed quite a recovery last year thanks to several catalysts. However, the most impressive were the well results of the company's emerging position in the STACK play of Oklahoma, which looks like it will be a key growth driver for the driller in the future. If that growth starts materializing this year, it could push the stock price even higher.

Why Continental Resources Stock Jumped as Much as 12% Today