NVIDIA Corporation (NASDAQ:NVDA) is a tech darling of sorts right now. The company's stock price skyrocketed 229% in 2016, fueled by growth from sales of its graphics processing units (GPUs) for its gaming segment.

Some stocks move at the whims of investors, but much of NVIDIA's stock-price rise can be attributed to the company's healthy lead in the GPU market and the huge steps it's taken in the self-driving vehicle market. It's these moves that have propelled NVIDIA ahead of its main competitor, Advanced Micro Devices (NASDAQ:AMD), and left little room for its rival to catch up.

Leader of the GPU world

Back in 2013 and 2014, AMD held as much as 38% of the discrete desktop GPU market. But since then NVIDIA has pulled further away from AMD in the space, and a slew of new graphics card rollouts and the recently upgraded Pascal architecture have helped the company receive a slight market-share bump in the most recent quarter. 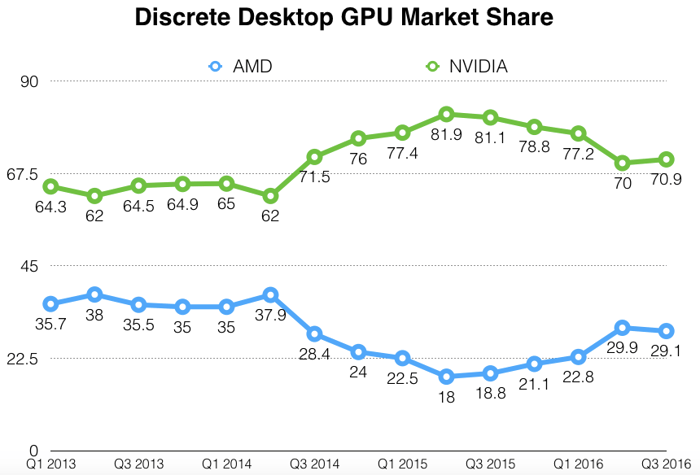 You can see from the chart that NVIDIA held as much as 81.9% of the discrete desktop GPU market, so it could still stand to grab a little more away from AMD. But its current position still gives NVIDIA a comfortable lead over its biggest competitor.

This has been great for NVIDIA because the company makes the majority of its revenue, 62%, from sales of its GPUs for the gaming segment. And the company has done a fantastic job of growing those sales as well, with revenue from gaming jumping 63% year over year in fiscal Q3 2017.

NVIDIA's lead in GPU market share should also translate into future gaming growth as the nascent virtual reality (VR) market grows. The company released three new VR-ready laptop GPUs late last year, which should help NVIDIA grab more of that growing segment. The VR market is expected to be worth $70 billion by 2020, and because of its lead in GPUs, NVIDIA is in a better position to benefit from VR's growth than AMD.

Much of the buzz surrounding NVIDIA right now is due to the company's self-driving car technologies. NVIDIA's Drive PX 2 supercomputer combines cameras and the company's powerful GPUs to process images that self-driving vehicles use to see what's around them.

Drive PX 2 is already used by 80 automakers and Tier 1 auto suppliers, and Tesla just became one of the latest automakers to use NVIDIA's supercomputer (along with some of its own technology) for its semi-autonomous Autopilot feature.

NVIDIA also released a new cloud-based supercomputer last year, called DGX-1, which the company says could be used for future self-driving cars, allowing them to offload data-hungry tasks to the cloud.

Each of these self-driving computers shows NVIDIA's ability to take its GPU prowess and apply it to new markets beyond traditional gaming or data center sales. This is a huge advantage NVIDIA has over AMD, because its rival so far doesn't have any supercomputers built for driverless-car image processing.

NVIDIA brings in only about 8% of its total revenue from its automotive business right now, but this auto revenue spiked 60.7% year over year in the third quarter. With the self-driving market expected to hit $77 billion by 2035, NVIDIA is perfectly positioned to see more automotive-tech growth in the coming years.

While there's no guarantee that NVIDIA will continue to outpace the competition in these two markets, the company has proved so far that it knows how to release new GPU technologies that keep it ahead of AMD and expand into new markets at the same time -- all without losing focus on its core gaming business. And that's a competitive advantage in and of itself.