Shares of CSX Corporation (NASDAQ:CSX), one of the nation's leading transportation suppliers with a network that encompasses about 21,000 route miles of tracks, have had quite an interesting couple of days after the company announced its fourth-quarter results and indications that activist investors are teaming up to influence CSX Corp. 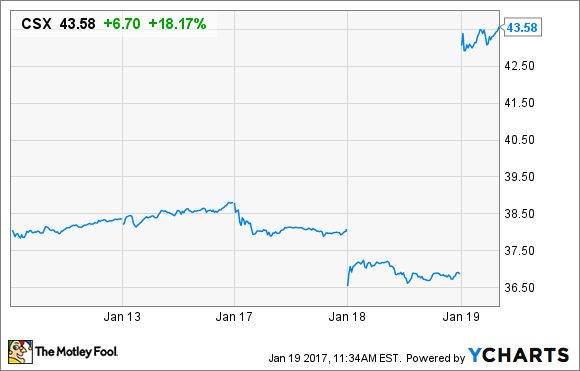 CSX announced a fourth-quarter mixed bag that included a beat on its top line with revenue checking in at $3.04 billion, ahead of the $2.89 billion analysts had estimated. However, fourth-quarter earnings checked in a penny below analysts' estimates of $0.49.

After shares traded slightly lower following its fourth-quarter announcements, its shares received a huge boost from the market after substantial rumors of an activist investment. Hunter Harrison, the former CEO of Canadian Pacific Railway (NYSE:CP), is said to be teaming up with activist investor Paul Hilal, with CSX as the target, per TheWall Street Journal. It's rumored that Hilal has raised as much as $1 billion for a single investment, with the investors locked in for half a decade.

It's possible Harrison will be thrust into a prominent role with CSX, but it's clear the market is optimistic about the shakeup, especially considering a potentially stable and substantial investment. One reason the market is likely optimistic is Harrison's track record of improved operations and cash flow while at Canadian Pacific. Investors will enjoy the 18% pop Thursday, but it could be some time before we hear valuable specifics that would lock in the gains.