In June, electric-car maker Tesla Motors (NASDAQ:TSLA) reported that the National Highway Traffic Safety Administration had opened a preliminary evaluation into Autopilot's performance in an unfortunate fatal accident that occurred while the technology was activated. About seven months later, NHTSA says it is closing the investigation after concluding that it did not identify any defects.

But NHTSA went further than ending the investigation. NHTSA's report on the analysis also highlighted some strengths of the technology.

"At Tesla, the safety of our customers comes first, and we appreciate the thoroughness of NHTSA's report and its conclusion," a Tesla spokesperson said in a statement on Thursday.

NHTSA's conclusion about Tesla's automatic emergency braking (AEB) system is of particular interest given the nature of the fatal crash, which consisted of the Autopilot-engaged Tesla driving on a divided highway and subsequently colliding with a tractor trailer driving across the highway perpendicular to the Model S. However, NHTSA said AEB systems aren't designed to operate in situations like this.

ODI's analysis of Tesla's AEB system finds that 1) the system is designed to avoid or mitigate read-end collisions; 2) the system's capabilities are in-line with industry state of the art for AEB performance through MY 2016; and 3) braking for crossing path collisions, such as that present in the Florida fatal crash, are outside the expected performance capabilities of the system.

Further, NHTSA emphasized that Tesla's system explicitly "requires the continual and full attention of the driver to monitor the traffic environment and be prepared to take action to avoid crashes." Suggesting the driver was inattentive, NHTSA's investigation found the driver had "at least seven seconds" to notice the tractor trailer.

Interesting takeaways from the report

In addition to exonerating Tesla, the report pointed to some other notable tidbits about the technology and its development.

1. Tesla was proactive about considering inattentive drivers in Autopilot's development. NHTSA found that "it appears that over the course of researching and developing Autopilot, Tesla considered the possibility that drivers could misuse the system in a variety of ways," and that "the potential for driver misuse was evaluated as part of Tesla's design process and solutions were tested, validated, and incorporated into the wide release of the product."

2. The crash rate for Tesla Autopilot-equipped vehicles dropped about 40% compared to vehicles without the technology, according to NHTSA's analysis of mileage and airbag deployment for Tesla vehicles. 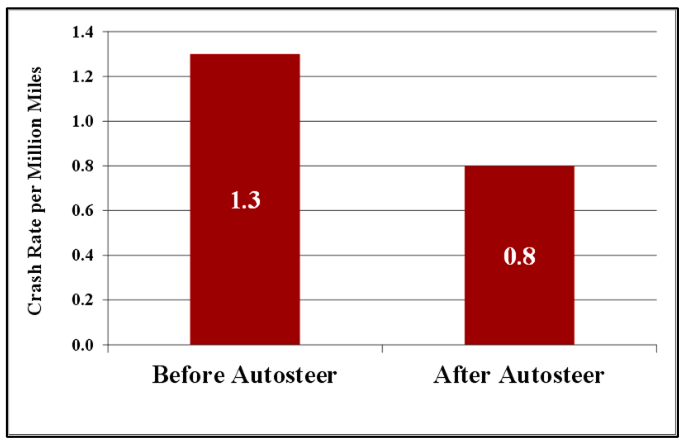 Pointing to this particular data point from the report, Tesla CEO Elon Musk tweeted Thursday, saying the company is targeting a 90% reduction in crashes for vehicles with the updated Autopilot hardware Tesla started including in every vehicle in October.

3. Tesla could have been more transparent about system limitations, but its warnings are more explicit now.

Tesla's information about system limitations of Autopilot is "perhaps not as specific as it could be," the report said. But information, particularly as it relates to user interface warnings, alerts, and driver monitoring systems intended to ensure the driver remains attentive, improved significantly in Tesla's 8.0 software update, which NHTSA highlights:

Tesla's design included a hands-on the steering wheel system for monitoring driver engagement. That system has been updated to further reinforce the need for driver engagement through a "strike out" strategy. Drivers that do not respond to visual cues in the driver monitoring system alerts may "strike out" and lose Autopilot function for the remainder of the drive cycle.

NHTSA's conclusion about the fatal crash is good news for Tesla investors. Not only does it emphasize how the company's Autopilot technology works as it's intended, but it also points to improving safety because of the technology. And with Tesla's new hardware being far more capable than the first-generation Autopilot hardware examined in this report, the safety of Tesla's vehicles should only improve.